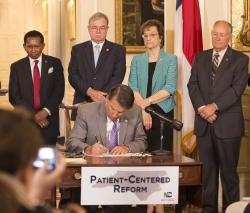 “Under the current system, we wait until people get sick to provide care and pay for tests — not outcomes. This new system will focus on keeping people healthy and delivering care where it makes the most sense for patients,” McCrory said Wednesday. “We’re going to accomplish this reform by paying providers based on improving patient’s health — not how many services patients receive.”

House Bill 372 ends a fee-for-service system that pays health care providers for each visit made by Medicaid recipients. Instead, the new program eventually will pay a set monthly amount per recipient, adjusted higher for sicker patients.

“I am very pleased that the House and Senate have reached a compromise that allows us to provide more financial stability for our state and our taxpayers,” said House Speaker Tim Moore, R-Cleveland.

“Now it is time to move to a model that places a higher priority on quality health care and long-term sustainability. Many other states are transitioning to similar plans, and North Carolina needs to be proactive,” Moore said.

“The reforms in this bill will not only save taxpayer dollars, and achieve greater budget sustainability, but will also provide an additional incentive for delivering the highest quality care and keeping North Carolinians healthy,” said Senate Leader Phil Berger, R-Rockingham.

The law overhauls the delivery of Medicaid services in a hybrid plan consisting of Managed Care Organizations and separate Provider-Led Entities.

It replaces the current Medicaid contracted administrator, Community Care of North Carolina, with three statewide networks that most likely would be MCOs operated by insurance companies, and 10 regional networks overseen by groups of hospitals and health care providers.

Medicaid recipients could choose which network they want to join.

The networks would be capitated, meaning they, not taxpayers, would be responsible for any costs exceeding budgeted amounts.

Senators sought to remove Medicaid from the state Department of Health and Human Services and make it a separate Cabinet-level agency. The final plan creates a Division of Health Benefits still under DHHS. Its director would be nominated by the governor and confirmed by the General Assembly.

Rep. George Graham, D-Lenoir, was the lone House Democrat voting for the measure.

Tuesday’s House debate got a bit testy at times.

Dollar said conferees on the legislation inserted “a poison pill” into the bill that would terminate CCNC’s contract in March 2016 if the compromise bill didn’t pass. He decried the “legislative strong-arming.” Rep. Gale Adcock, D-Wake, called it “the nuclear option for CCNC,” and said “I don’t want to be extorted into voting for this.”

Medicaid claims cost have dipped 9 percent per enrollee from 2010-14 while the program grew by more than 200,000 participants, Dollar said. North Carolina is “far and away performing better than the majority of managed care states in this country,” ending with surpluses of $60 million in 2014, and $130 million in 2015, with projections it will be in the black the next two years as well.

North Carolina should keep the present system, “caring for our citizens and not for a group of stockholders,” Dollar said. That theme of profit-seeking out-of-state MCOs rushing into the state was echoed by several Democrats.

“I’ve got some news for you. They’re already here,” said state Rep. Justin Burr, R-Stanly, in hitting back at that contention. “You’re not talking about folks just coming into North Carolina.”

More than 7,000 employees of those companies already work here in what has become a significant presence of managed care entities in other health care arenas, Burr said.

Rep. Donnie Lambeth, R-Forsyth, pushed back on Adcock and Rep. Joe Sam Queen, D-Haywood, for saying quality of care would decrease under MCOs. He asked each of them if they knew how quality of health care was measured. Neither did.

Lambeth also took issue with Democrats’ warnings that commercial networks would seek to increase profits by cutting optional services and lowering rates paid to doctors. The DHHS secretary will set the rates, with General Assembly approval, he said. The secretary would be empowered to change optional services, but MCOs could not do so arbitrarily, he said. The General Assembly retains authority to step in if needed.

Rep. John Blust, R-Guilford, responded to statements by Queen and several other Democrats arguing that doctors and hospitals should be left alone to run the Medicaid networks because Provider-Led Entities would be superior to commercial plans.

“Won’t this competition be one-sided? Won’t the providers just run the insurance-led organizations off the playing field … if what you’re saying is true?” Blust asked.

Queen said it is too early to tell.