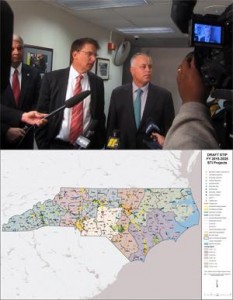 It’s the first State Transportation Improvement Plan under a new highway funding formula passed in 2013 by the General Assembly.

“One of our goals now is to deal with these choke points throughout the state that have deterred the economic potential of small towns and large cities alike,” McCrory said, addressing the state Board of Transportation. “From Asheville to Wilmington, we need to now unleash the choke points.”

“We’re taking the politics out of road building and transportation, so we’re getting a bigger bang for limited dollars,” McCrory said, speaking with reporters after his presentation to the board.

Tata said 3,100 projects were submitted by regional planning organizations. The plan calls for DOT to fund 478 highway projects over the next 10 years, resulting in the creation of 300,000 jobs.

“Those are long-term jobs,” Tata said. “That’s not jobs on the project.”

The DOT said that under the old highway formula, the DOT would have funded 175 high projects creating 174,000 jobs.

McCrory said that in addition to helping traffic flow better throughout North Carolina, the plan would help portions of the state connect to economic centers in neighboring states — such as Hampton Roads, Va., Greenville-Spartanburg , S.C., Johnson City, Tenn., and Myrtle Beach, S.C. — allowing economic activity from those areas to spill over into North Carolina.

Among the projects planned for construction are:

• Expanding U.S. 321 between Lenoir and Hickory, improving connectivity from that part of the state to Charlotte and Interstate 85.

• Improving I-85 in Gaston County and removing a two-lane bottleneck in southern Rowan County, helping improve traffic for commuters going to Charlotte. It also will improve traffic from Charlotte to the Greenville-Spartanburg area.

• Expanding N.C. 211 to Southport and Oak Island and improve their connection to the U.S. 17 corridor. This is designed to relieve congestion during the tourist season and improve a coastal evacuation route.

• Building the Mid-Currituck Bridge in Currituck County, connecting Corolla to the mainland. That bridge helps connect the Outer Banks to the Hampton Roads area of Virginia.

• Expanding U.S. 17 between Jacksonville and Wilmington would help Marines at Camp Lejeune and their families travel between the Marine base and Wilmington, Tata said.

• Turning U.S. 1 into a controlled-access freeway in northern Wake County, helping commuters get to and from Raleigh.

• Creating a loop around Greensboro, helping motorists reach northern counties in the state and get to Virginia.

Tata said the plan also calls for the potential use of more toll lanes in two of the state’s top metropolitan areas — Charlotte and the Triangle.

Managed or express lanes eventually would replace the dedicated bus lanes on Independence Boulevard in Charlotte. The 10-year plan also includes study and environmental impact phases of placing express lanes on Interstate 40 from U.S. 15/501 in Durham County to U.S. 1/64 in Wake County. Construction would not begin before 2025.

The I-40 express lane proposal would allow motorists to continue using general-purpose lanes for free or pay a toll to use the express lanes.

“These are recommendations made from locals to prioritize their projects,” McCrory said of the toll projects.

Both McCrory and Tata said the 10-year plan still leaves a lot of projects unfunded. McCrory said he’s considering pushing a $1 billion highway bond proposal next year. He said details on that plan are expected in January.

McCrory said the plan was designed with the future in mind.