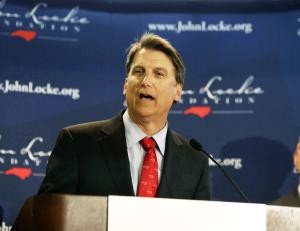 “Ultimately, it’s about North Carolinians keeping more of their hard-earned money for their paychecks, so they can buy, save, and invest more for their families,” McCrory said during a Tuesday news conference at the Doubletree Brownstone Inn in Raleigh sponsored by the John Locke Foundation.

McCrory said that April 15 is a good date to remind people of the benefits of tax reform.

“Today marks the last time that North Carolinians will be compelled to comply with an outdated, outmoded, anticompetitive tax code,” Hood said. Most of the tax reforms passed last year took effect Jan. 1 and will be reflected on the 2014 state tax returns filed next year.

Hood noted that analysis by the John Locke Foundation and N.C. General Assembly staff showed that most households would pay lower taxes because of the tax reforms. He also cited a survey conducted by JLF of peer-reviewed studies in academic and professional journals showing that higher overall tax burdens are associated with lower economic performance.

The findings show that the state needed to reduce its high marginal income tax rates to allow employers to compete effectively, Hood said.

“Tax reform is a long-term investment,” Hood said. “It’s not just a short-term stimulus. It will take years for its benefits to fully manifest themselves in higher employment and income growth in North Carolina.”

Hood noted that a Tax Foundation analysis showed that the state was about to leap from 44th to 17th in business tax climate.

Williams said the changes allowed the state to climb within one year nationally from No. 22 to No. 6 in an ALEC analysis of economic competitiveness, gains that were higher than any state in the nation.

Thompson said the changes put more money in consumers’ pockets to spend and allow business owners to invest more in jobs. He said the elimination of the estate tax allows business owners not to worry about what could happen to their businesses after they die.

After Tuesday’s press conference, McCrory said he didn’t think that the General Assembly would make many changes in the tax code, such as further broadening the sales tax base, until the effects of the tax reform are known.

When pressed on whether the earned income tax credit at the state level should be restored, McCrory said he wanted to focus on the positive effects that the tax reforms could have, such as providing better jobs for North Carolina workers.

Lewis said that the General Assembly, during its upcoming short session, would do a few things to tweak the law, but doesn’t see any major changes.

Examples of fine-tuning the new law include better defining a service contract, which is taxable in the new code. He also said there would be some tweaking of the law to help new farmers just starting their operations.

Lewis also said that the General Assembly would take a look at film tax credits, which are scheduled to expire at the end of the year.

“My reading [of] the tea leaves as best I can, I don’t think the support is there for [continuing] it,” Lewis said of the 25-percent renewable credit offered film production companies for their expenses. “I think the data we’ve seen brings into question if it’s a good value for the taxpayers of this state.”

Lewis said lawmakers have a fiduciary responsibility to account for tax dollars the best they can.

“As hard as they’ve tried and as many good people — North Carolinians — that do work for the [film] industry, they simply have not been able to make the economic case that it’s a good investment of the taxpayer dollar,” Lewis said.

The highlights of the tax reform package included establishing a flat rate for personal income tax. That rate dropped to 5.8 percent on Jan. 1 and will drop to 5.75 percent in 2015 and thereafter. Previously, the tax rate ranged from 6 percent to 7.75 percent, depending on income.

The corporate tax rate, which was at 6.9 percent, dropped to 6 percent at the beginning of the year. It will drop to 5 percent next year, and decrease further if certain tax collection triggers are met.