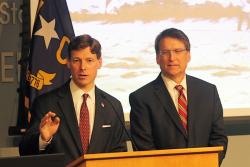 Gov. Pat McCrory called on lawmakers to honor a promise to increase starting teacher salaries to $35,000 and included salary boosts for state troopers and corrections officers Thursday as he unveiled his $21.5 billion General Fund budget for the 2015-16 fiscal year.

McCrory also included a boost to pay for Medicaid benefits and provided money for economic incentives, along with historic preservation and film tax credits.

Lee Roberts, McCrory’s budget director, said the budget spends a half-billion dollars more on K-12 education than the previous budget, and that the 2.9 percent increase in General Fund spending is less than the state’s growth in population and an allowance for inflation, or the limits under a suggested Taxpayer Bill of Rights.

McCrory noted that corrections officers average less than $30,000 a year. “This is a 12-month job, a very dangerous job,” he said. “We need to make sure we move their salaries to ensure that we keep well-qualified ones that are very important.”

McCrory added that the pay has been “unacceptable for the past decade.”

Roberts said it’s difficult to specify how much more individual corrections officers would make because the raises would not be uniform.

“The idea is to make a distinction based on what kind of prison they work in,” Roberts said, adding that raises would be phased in over three years.

The initial $20.8 million to pay for corrections officer raises was included in the 2016-17 fiscal year, the second year of the biennium.

The budget doesn’t include across-the-board pay raises for state employees.

“What we should do in a situation of limited availability is use the money where it can make the most difference,” Roberts said. “An across-the-board pay raise probably is not the most effective way of doing that.”

In addition to money for the state pension and the health plan, the budget includes $81 million in longevity pay, Roberts said. He added that $82 million would be targeted toward compensation for hard-to-fill positions.

Roberts also said the court system could share in the proceeds of a proposed bond package that McCrory is seeking to revitalize state buildings and build new infrastructure.

McCrory also plans to ask for a separate $1.2 billion to $1.4 billion revenue bond, not requiring voter approval, for transportation.

The budget assumes the House will endorse the 35-cent-per-gallon gasoline tax that the Senate approved earlier this year. That would be an immediate cut from the current 37.5-cent-per-gallon tax, but it would leave the tax higher than it would have been if the current gas tax formula had been kept intact.

Aside from gas taxes, the budget includes no tax increases. It allocates $47 million to the state’s rainy day fund, bringing the total to $698 million. It also provides $47 million for repairs and renovations.

The $10.8 billion two-year appropriation represents nearly one-quarter of the entire budget. Of that amount, $7.8 billion, or 18 percent of the General Fund budget, is dedicated to Medicaid. There are 1.8 million residents, roughly 18 percent of the state population, on the Medicaid rolls.

Medicaid is projected to grow $287 million in the first year of the biennium, and $460.6 million in year two due to higher enrollment, higher utilization of services, and anticipated costs per participant.

A $175 million Medicaid Risk Reserve is budgeted to help offset any budget overruns.

Democrats and liberal advocacy groups on the left have demanded further expansion of Medicaid, but McCrory did not include funding to expand the government insurance program for the poor and disabled.

“With all of the uncertainty surrounding the future of the Affordable Care Act — including the U.S. Supreme Court case over health care subsidies that won’t be resolved until June — it just makes sense to wait before making any decisions about expanding Medicaid, which is a major component of the Affordable Care Act’s implementation,” said Katherine Restrepo, JLF Health and Human Services policy analyst.

“We recognize the Supreme Court case could have major ramifications on everything related to health care, including Medicaid,” McCrory said.

During a recent meeting with President Obama at the White House, McCrory said, he asked the president if he would work with governors to craft an alternative should the Supreme Court strike down insurance subsidies in states such as North Carolina that did not create state health care exchanges, but opted to allow the federal government to operate an exchange.

He said Obama told him he did not believe the justices would end the subsidies in states using a federal exchange despite language in the law restricting the money specifically to state-created exchanges. Obama insisted the Affordable Care Act is a great success, and that North Carolina could just create a state exchange if the justices strike down subsidies for federal exchange states.

Creating a state exchange overnight would not be practical, McCrory said.

“There are implications regarding operation, and management, and money. And even if it works there are states where it has been a total disaster,” he said.

The DHHS budget also includes nearly $82 million over the biennium in new funding for mental health and substance abuse services, including $16.6 million to open the new Broughton Hospital.

In economic development, a variety of controversial incentives are included in the proposal. Those include $99 million the first year and $107 million the second year to reimburse costs of commitments previously made under NC Competes to recruit and retain quality jobs and large-scale capital investment.

A Jobs Preservation Tax Credit is budgeted at slightly more than $75 million, and there is a renewable energy credit program budgeted at $7 million for sources other than solar energy.

An appropriation of $10 million in each year would be included for filmmaking incentives, and the governor would revive the expired Historic Preservation Tax Credit with $1.7 million the first year and $10.5 million the second.

“The administration’s been clear that nobody likes incentives. In an abstract world we’d all prefer not to have them,” Roberts said. “We don’t live in an abstract world. We live in a competitive world, and to not have them would be tying both of our hands behind our backs.”

Reaction to the budget proposal was mixed.

“Legislators should take a long look at any plan to expand the state’s main targeted tax incentive program, along with reviving recently expired tax credits for the film industry and for historic preservation,” said Sarah Curry, the John Locke Foundation’s director of fiscal policy studies.

“They will likely find other higher priorities that could be addressed with that funding,” Curry said.

“We appreciate Gov. McCrory’s hard work in crafting a balanced budget proposal and his shared commitment to making our state more competitive by increasing pay for early career teachers,” said Senate President Pro-tem Phil Berger, R-Rockingham. “The Senate looks forward to reviewing the governor’s plan in greater detail and finding common ground as we work through the appropriations process.”

State Democratic Party Chairwoman Patsy Keever called for a change in priorities for the state.

“Over the last two years, Gov. McCrory chose to offer massive tax giveaways to millionaires and giant corporations in places like Texas and China — and forced middle class families in North Carolina to pay for it,” Keever said. “It’s time that we build an economy that works for everyone – that means creating good new jobs, putting more money in the pockets of the middle class, and providing our kids with a quality education.”

Another Democrat, however, had kinder words for McCrory’s budget proposal.

“The governor’s budget is very pragmatic and centrist oriented,” said Rep. Ken Goodman, D-Richmond, chairman of the N.C. Main Street Democrats. “From a policy perspective, we appreciate the fact that he isn’t raising taxes and is looking at efficiencies in government to prioritize spending. I hope the Republican leadership will be open to the governor’s recommendations on economic incentives, raising teacher pay, and supporting the bond referendums for our roads and government buildings.”