Based on a price breakdown from the ABC Commission's website, the retail price of a bottle of liquor can be more than double the distiller's original price

The North Carolina excise tax on distilled spirits has risen to the fifth-highest in the country, according to recent data from the Distilled Spirits Council of the United States. Industry experts say the news is bad for business.

Consumers pay an average state excise tax of $14.66 per 750 milliliter bottle of 80-proof liquor. The North Carolina liquor tax was ranked as the eighth highest in a study last year — at $12.48 — but rose three spots in the 2017 study.

Bill Owens, president of the American Distilling Institute, says business can flourish when excise taxes are low, but some state laws are stuck in the Prohibition era.

“North Carolina is pretty notorious for not being forward thinking on the issue,” Owens said. He says when small craft distilling operations pay high excise taxes, “They have to pass that on to the price of a bottle and it makes [craft distillers] noncompetitive.” 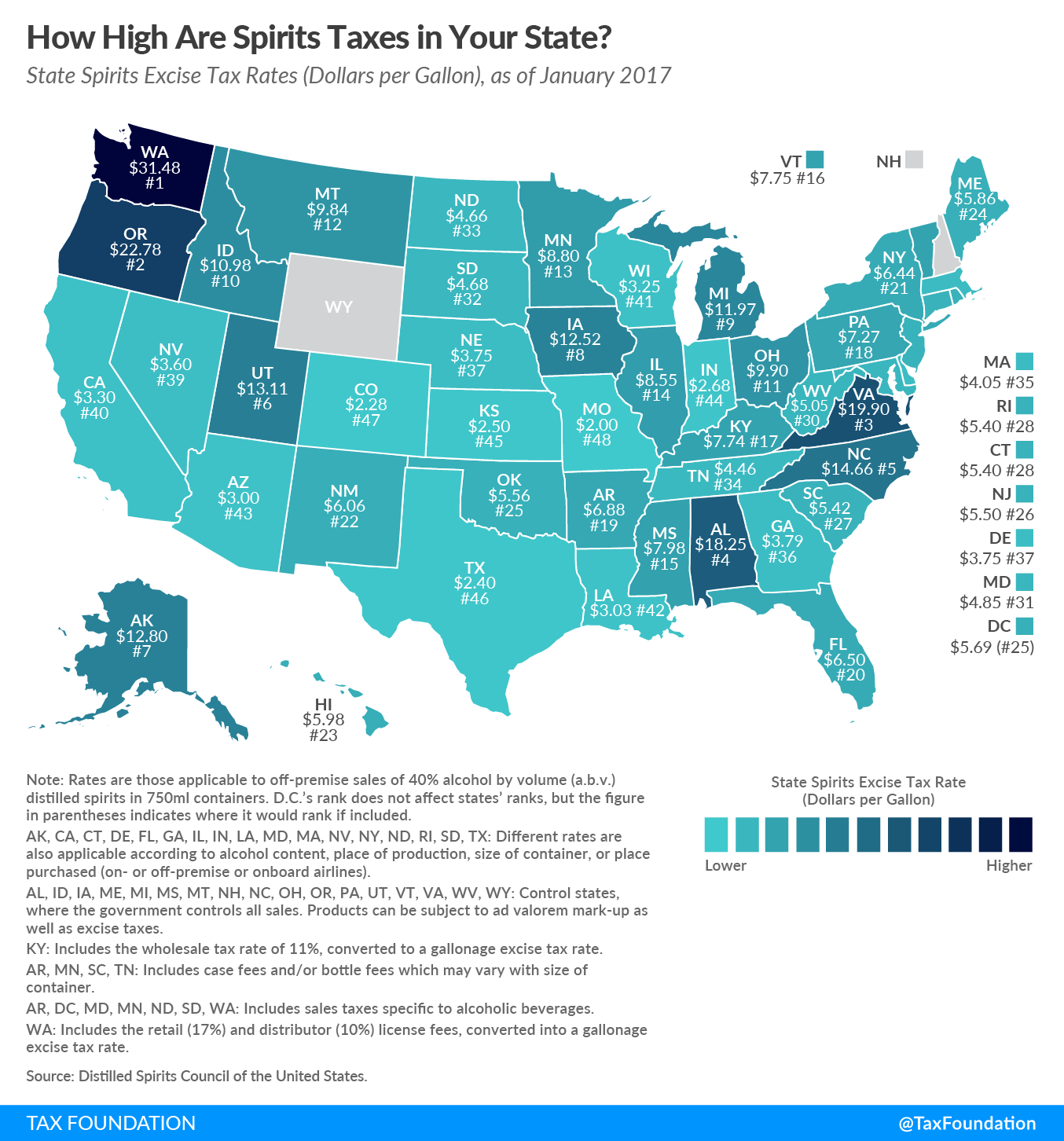 The spirituous liquor that North Carolina consumers drink is taxed at multiple stages in the journey from barrel to decanter. North Carolina is a “control” liquor state — outside of bars and legal distilleries, it can be sold only at state-run Alcohol Beverage Control stores.

Distillers pay a federal tax of about $13.50 per gallon on liquor they produce for sale, though the tax varies based on the liquor’s alcohol content. They also pay a 30 percent state excise tax, any taxes set by county or municipal ABC boards, and several smaller state distribution taxes.

These taxes are built into the price tag of a bottle of liquor on the ABC store shelf. Add a 7 percent state sales tax, and you get the final price that consumers pay. Establishments that wish to sell mixed drinks with liquor must pay an additional mixed beverage tax. Based on a price breakdown on the ABC Commission’s website, the retail price of a bottle of liquor can be more than double the distiller’s original price.

Government control over the sales of spirits isn’t necessarily the reason for the high cost of liquor. Wyoming and New Hampshire government-run stores set prices so low their excise taxes weren’t even included in the DSC study.

Owens believes the craft distilling industry is a natural complement to tourism and agriculture. He imagines a future when Appalachian farmers grow heirloom corn for “dirt to drink” distilleries that cater to destination-wedding tourism parties.

Reaching that future requires lobbying state government to cut down on alcohol regulations, which, Owens says, is difficult for small business owners without political clout.

The American Craft Spirits Association is working at the federal level to make excise taxes more friendly to its industry. Members of the association will lobby Congress in July to reduce the federal excise tax on spirits by 80 percent, which, they say, would equal the rates enjoyed by small-scale breweries and wineries.

Robert Cassell, a distiller from Pennsylvania who helped curb regulations on spirits in his state, seconded Owens’ opinion that craft distilleries enrich their local communities.

“It actually has a pretty far reaching economic impact that most people don’t think of,” Cassell said. “When you look at what we do, it’s actually employing a lot of people.”

Cassell said distillers often handcraft their products, requiring workers to distill, bottle, label, ship, and sell the product. Distillers carry on a colonial-era tradition of turning excess local corn into a valuable product, but the process can be expensive because of the quality ingredients and attention to detail.

Cassell, who is also a member of the DSC, said distillers pay $2 in taxes for every $1 they spend on production of spirits. He thinks lowering excise taxes is one of the best job-creating moves state legislators can make, growing the distilling, tourism, and agriculture industries.

North Carolina beer and wine taxes are a bit lower than those for spirits. A 2017 study by the DSC listed North Carolina’s wine tax of $1 per gallon, affecting 750 milliliter bottles of 11 percent alcoholic wine, as No. 20 in the nation. The most recent study for beer listed the state beer tax of 62 cents per gallon, affecting 12 ounce containers of 4.75 percent beer, as the eighth-highest in 2016.

Still, one estimate lists North Carolina as the fourth-cheapest state for beer. A SimpleThriftyLiving.com study said that a 24-pack of 12 ounce Bud Light or Miller Lite cans is $15.23 on average, The News & Observer reports.

N.C. Senate Bill 155, which passed the upper chamber in June and was last referred to the House finance committee, loosens restrictions on the ability of distilleries to sell their own products directly to consumers, but does not reduce state excise taxes on spirits.