The N.C. House failed to override a veto on a bill to reopen gyms and bars Wednesday, June 24, sealing the fate of hundreds of businesses around the state.

North Carolina began reopening May 8. As the state moved through Phase One, Cooper promised a slow return to normalcy — like a dimmer switch turning up the lights. Cooper said Phase Two would include reopenings for gyms, bars, movie theaters, salons, barbers, retailers, and restaurants starting May 22. But when that day came, fitness centers, bars, and cinemas were ordered to stay closed, while restaurants, salons, retailers, and even swimming pools opened for business. Some gym and bar owners filed lawsuits. Others opened in defiance of the law. Others waited for Cooper’s Phase Three, which many hoped would begin this month.

“The governor’s decision is effectively signing a death warrant for 1,063 bars across North Carolina while offering zero relief to the small-business owners or their employees,” said Zack Medford, president of the N.C. Bar and Tavern Association in a news release.

Cases are rising in the state, Cooper said, and hospitalizations for COVID-19 are spiking. Over the past four weeks, North Carolina completed 791,285 tests and confirmed 56,174 COVID-19 cases. In all, 1,271 people died. Eighty percent of those deaths occurred among people 65 and older. Another 14% of deaths were among people 50 and older.

People ages 25-49 made up 45% of all confirmed cases, but only 5% of all coronavirus-related deaths, health department data show.

Cohen didn’t answer questions about how many people are hospitalized for COVID-19, versus how many test positive for coronavirus when they go to the hospital for elective surgeries and other treatments.

The numbers are a stark warning, Cooper said during the news conference. The state can’t go forward with the next phase while the trends head in the wrong direction, he said.

“I am not up here to give my opinion,” Rep. Michael Speciale, R-Craven, said during a House debate Wednesday. “Way, way too often our decisions are not based on what is best for the people of North Carolina. It’s about what’s best for our caucus or our party. I’m asking everyone here to stop and remember that you are representing the interests of [many] people.”

Gyms and bars are no different than any other business, Speciale said.

“Everybody in this room needs to press the yes button and let them go back to work,” Speciale said.

The General Assembly has passed a series of bills that would reopen businesses shuttered under Phase Two. Cooper has vetoed all of them, except for a bill to reopen bowling alleys and roller rinks, which is still on the governor’s desk.

House Bill 594 would have reopened gyms and bars with safety precautions in place. Under the bill, the governor would need concurrence from the Council of State before closing any business.

One Democrat, Rep. Michael Wray of Northampton County, joined with all Republicans in the failed override. 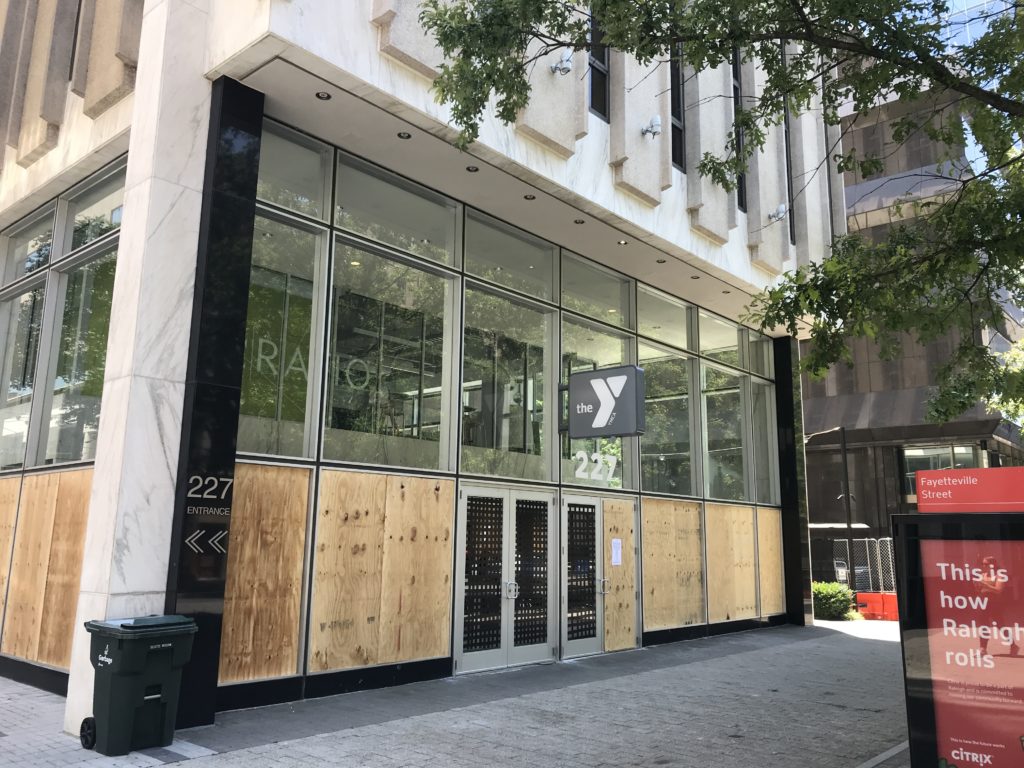 The YMCA in downtown Raleigh, boarded up after rioters broke windows and looted the property. (CJ photo by Rick Henderson)

Earlier Wednesday, dozens of gym owners and workers gathered in front of the General Assembly to urge lawmakers to override the veto on H.B. 594. Fitness Operators for Responsible Reopening, a coalition of gyms, led the crowd in calling for the chance to show fitness centers could safely reopen.

The coalition was armed with a 14-point plan on keeping their businesses safe, including requiring all employees to wear masks and routinely cleaning the facilities.

North Carolina is one of the few states that still haven’t reopened gyms, said Doug Warf, president of O2 fitness.

“Forty-seven governors from both political parties have acknowledged the relationship between physical fitness and mental health by allowing gyms to safely reopen, so why won’t Governor Cooper? We strongly urge the governor to amend his Executive Order to reopen gyms now using our science backed, 14-step plan featuring the highest public health precautions and stringent sanitation protocols.”

The virus is a serious concern, but other states have safely reopened gyms, Warf said. It’s time North Carolina joins them, he said.