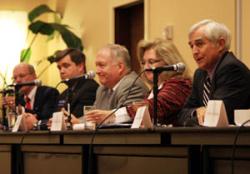 They’re the most unnoticed races of the midterm elections, but their results could have more impact on North Carolina’s political landscape than which party controls the General Assembly.

Already, judicial races are shaping up to be the untold story of 2010. One race in particular is the elephant in the room — a swing seat on the seven-member N.C. Supreme Court that could decide the fate of next year’s legislative redistricting plan.

Even so, many voters don’t recognize the candidates’ names or know where their judicial philosophies fall. Because the races are nonpartisan, citizens can’t vote a straight-party ticket. Sometimes, voters give up by the time they reach the judicial candidates on the ballot.

“It’s an extraordinarily small percentage of voters who will admit to knowing anything about the candidates that they’re voting for, which makes it a poorly conformed crapshoot,” said Gene Nichol, a law professor and director of the University of North Carolina’s Center on Poverty, Work & Opportunity.

Nichol said it’s part and parcel of an election-based system for judges. “A system in which people are chosen on such extraordinarily modest information doesn’t have a good chance of being a good one,” he said.

Voters’ lack of knowledge can sometimes be traced to candidates themselves. Frequently, campaign websites shy away from contenders’ judicial approach and instead focus on credentials and family history. In addition, many candidates don’t respond, or only provide partial information, to voter guide questionnaires from advocacy groups.

“The legal community is very much knowledgeable about these candidates and funds these races to a large degree,” he said, “but the average voter who may know the U.S. Senate candidates would be hard pressed to name a judicial candidate, much less two people running against each other.”

With the retirement of Associate Justice Edward Brady, the state Supreme Court’s philosophical divide hangs in the balance. Judicial races converted to nonpartisan in 2002 — meaning candidates’ party affiliation isn’t listed on the ballot — but the Republican Party backs four of the seven justices.

Brady’s departure gives left-leaning advocates hope of gaining a pivotal swing vote on the court. The results could have a major impact on how legislative districts are drawn next year.

Experts predict the plan will get snarled in the courts, as it did after the last census when the state Supreme Court struck down the Democratic-controlled General Assembly’s redistricting plan. The vote fell along party lines, leading to charges of judicial partisanship.

This year, two appellate court judges — Bob Hunter, a registered Democrat, and Barbara Jackson, a registered Republican — are contending for the open seat. Hunter has won the endorsements of former Democratic Gov. Jim Hunt and the N.C. Association of Educators. Jackson received a joint endorsement with Hunter from the N.C. Association of Defense Attorneys. The state Republican Party also backs her.

At a candidate forum Sept. 21 sponsored by the Federalist Society and the John Locke Foundation (publisher of Carolina Journal), Jackson said that she takes a limited view of judicial intervention. “My judicial philosophy is that I believe it’s up to judges to judge and leave it to the legislature to legislate,” she said. “I don’t think the courts should act in the role of a super-legislature, and I tend to take a very narrow view of the court’s role.”

Hunter didn’t attend the forum. Asked in a phone interview to explain his view on the judiciary’s role in government, Hunter said that judges “must be guardians of the rights guaranteed in the United States and North Carolina constitutions, be fair and impartial arbiters of the law, ensure the courts are open and accessible to everyone, and have a role in providing for the public safety.”

Nichol said he expects partisan forces to get significantly more involved in the race as Nov. 2 approaches. “This much is clearly true,” he said. “The activists in both parties have a wary and committed eye about that race, and they surely regard it as one that has huge partisan implications, which it does.”

Both Hunter and Jackson have opted into the state’s Public Campaign Fund, which allows candidates to forego campaign contributions from individuals in exchange for a lump sum of taxpayer dollars.

Along with the Supreme Court race, five seats on the N.C. Court of Appeals are on the ballot this November. One of the races is uncontested. Another, packed with 13 candidates, will use an instant runoff voting method. The remaining seats are traditional match ups between two opponents.

Asked at the candidate forum whether foreign law should play a role in appellate court decisions, Walker said it would be “problematic” because not every nation has the limited-powers tradition of the United States. Elmore said the issue “doesn’t really enter into the picture” on the Court of Appeals.

In another race, self-identified Republican Ann Marie Calabria is vying to keep hold of her seat against Wake County District Court Judge Jane Gray, a registered Democrat. Calabria, elected in 2002, made an unsuccessful bid for the Supreme Court four years ago. Republican U.S. Sen. Richard Burr has endorsed her.

Calabria said that originalist Justice Antonin Scalia is her favorite member of the U.S. Supreme Court. Gray named Justice Benjamin Cardozo as her choice. Cardozo, regarded as a liberal-leaning jurist by historians, served on the nation’s high court during the Great Depression.

“He had great skill in writing a decision that was understandable, not just to the lawyers involved in the case, but to the public,” Gray said.

A third race pits incumbent Judge Martha Geer, a registered Democrat, against Dean Poirier, a registered Republican and appeals referee with the N.C. Employment Security Commission. Poirier describes himself as a conservative Christian on his website.

From 1991 through 2002, Geer was a founding partner of Patterson Harkavy LLP, a law firm that focuses chiefly on civil rights and workers’ compensation disputes.

On the role empathy should play in the judiciary, Geer said it’s important to remember that rulings impact individuals. “You don’t rule based on that, but what you do [is] remember that these are real live cases which involve real people and real businesses,” she said.

Poirier said the place for empathy is in the trial courts. “I don’t think there is a lot of room for empathy at the appellate court level,” he said. “At the appellate level we’re primarily an error court, and we have to make sure that the law was applied as intended.”

All six candidates have filed notices of intent with the N.C. Board of Elections to receive public financing for their campaigns, but only Calabria, Gray, and Geer have been certified.