The North Carolina Railroad Company has taken on a project that may be outside its core mission by announcing in January it would spend $13 million to purchase 875 acres of private land for the 1,500-acre Greensboro-Randolph Megasite project, an industrial site designed to attract a large automotive plant.

In addition, the $13 million NCRR has committed to purchase the land would be more than three times its net annual income, which in 2014 was $4.1 million.

NCRR president Scott Saylor told Carolina Journal that his board approved the participation in the megasite project as part of the company’s broader economic development mission.

The property is located along U.S. 421 west of Liberty, and is entirely in Randolph County. The other organizations participating in the project are the city of Greensboro, Randolph County, and the nonprofit Greensboro-Randolph Megasite Foundation. The county has purchased about 420 acres, and the foundation plans to purchase approximately 200 acres.

The city of Greensboro is planning to pay for the extension of water and sewer services to the site. If a manufacturer agrees to build a suitably large facility on the site, the assembled acreage will be donated to that company.

The project has significant local opposition, including real estate attorney Alan Ferguson, who lives near the project. In an op-ed article published recently by the Greensboro News & Record titled “The megasite is a reckless gamble,” Ferguson compared the megasite to the Global TransPark project near Kinston.

NCRR is a unique operation because it is a private company with all the stock owned by the state of North Carolina. The governor and legislative leaders appoint the 13 members of the board of directors. Its primary income comes from leasing a share of its tracks to Norfolk Southern Railway.

Norfolk Southern Railway owns the rail line bordering the site and the NCRR track is approximately 15 miles away in Greensboro.

NCRR spokeswoman Megan Hoenk told CJ that the $13 million “will largely come from sales of legacy properties no longer used for railroad purposes.” She said that use of money would not take away from other projects that are directly related to the NCRR corridor.

Hoenk acknowledged that no legislative committee has authorized NCRR’s participation in the megasite project. “However, we have kept legislative and administration leadership briefed on our plans,” she said. 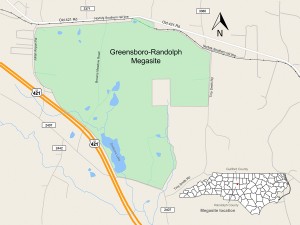 The Joint Legislative Transportation Oversight Committee has the responsibility for overseeing NCRR activities. Committee Co-Chairman Sen. Bill Rabon, R-Brunswick, told CJ that he was aware of the planned purchase but was not sure if the full committee knew about it. He said NCRR is scheduled to provide an update of its activities at an Oversight Committee meeting scheduled for March 4. Rabon also said he has confidence in the NCRR board.

The N.C. Department of Commerce lists two other megasites as ready for an automaker. One is near Siler City and the other near Rocky Mount. Gov. Pat McCrory said in January that the state intends to go after a major manufacturer using North Carolina’s megasite offerings.

“It’s one of our major priorities, but we’re going to go after the big dog in manufacturing, which is either going to be in aerospace or automobiles,” he said speaking to an annual Economic Forecast Forum in January as reported by Triad Business Journal.

To open the state for economic development, in 1848 the General Assembly passed a bill calling for an east-west railroad between Goldsboro and Charlotte. The General Assembly approved a plan under which 25 percent of the shares would be for private stockholders and the remainder would be owned by the state.

In 1856 the first train ran the entire length of the line. NCRR entered into a 99-year lease with Southern Railway (now Norfolk Southern) for operations and maintenance. In 1989 NCRR acquired the tracks from Goldsboro to Morehead City. In 1998 the state of North Carolina bought out the private shareholders, making NCRR a private company, fully owned by the state. The next year, NCRR and Norfolk Southern reached an agreement for Norfolk Southern to continue freight and maintenance operations for 15 years, with an option to renew the agreement for an additional 30 years.

In 2001 NCRR “implemented a Corridor Improvement Plan to improve the maintenance, integrity, and economic potential of the railroad corridor.” NCRR’s current mission statement is, “To develop the unique North Carolina Railroad assets for the good of the people of North Carolina.”

Frank Rouse of Leland is the current chairman and state Commerce Secretary John Skvarla is another board member.

There are other entities with a direct stake in the megasite project, however. The Piedmont Triad Partnership, a regional economic development organization, began working quietly in 2010 to identify a megasite location. Randolph County and the city of Greensboro later joined the effort. The Department of Commerce made a $1.7 million grant to Randolph County in 2012 to support the development and acquisition of a megasite. The groups eventually settled on the current location that involves approximately 60 separate parcels.

David Powell, chief executive officer of the Piedmont Triad Partnership, resigned in January 2015. At the time Powell left, his annual salary was $326,000. The megasite was a high priority for PTP.

In April 2015, PTP learned that Powell had been involved in “financial irregularities” and asked the Greensboro Police Department to investigate the matter. In January, the Guilford County District Attorney’s office charged Powell with two felony counts each of embezzlement and obtaining property by false pretense.

In February 2015, immediately after Powell’s resignation, former Greensboro mayor E.S. “Jim” Melvin formed the Greensboro-Randolph Megasite Foundation with the stated purpose of acquiring land for the site — bringing an additional player to the potential management and oversight of the project.

Ferguson and others formed the Northeast Randolph Property Owners to fight the project. Ferguson is opposed not only to this project but also to any use of government funds to assist private companies — often called corporate welfare. The organization’s website contains a considerable amount of information about the history of the project.

At a Feb. 9 Randolph County Commission meeting to rezone the property from residential/agricultural to heavy industrial, Ferguson spoke against the proposal and presented commissioners a petition signed by more than 400 area residents opposing the megasite project. The commissioners voted 3-2 in favor of rezoning the 1,500 acres.

Ferguson told CJ that the NCRR involvement was a surprise.

“After almost four years of trying to find private investors for this project, the boosters were unable to find enough,” he said. “The railroad has apparently stepped in at the last minute and bailed this project out in order to save it from failing. Those of us who have opposed this project still can’t figure out why NCRR doesn’t spend money in its own corridor on railroad improvements.”