Robert Graboyes’ 93-year-old mother had a phone and an iPad, and she knew how to use them.

Those skills probably saved her life.

During a Facetime conversation a few years ago with her grandson, a medical doctor, she complained about a lingering sore. As Graboyes’ nephew watched her breathing and facial expressions, he knew something was wrong. He asked to see the sore, which she showed him with the aid of her iPad. The grandson called his father, also a doctor, to consult.

“He told her to get a cab and get to a hospital as fast as she could because, just from looking at her on screen, he could tell she was very likely heading into septic shock,” Graboyes said. She arrived at the hospital in time to receive powerful antibiotics to kill the infection.

“Her iPad probably gave her an extra year, year and a half on her life,” Graboyes said of his now-deceased mother. “That’s typical of what one can do with telemedicine.”

Graboyes would know. He uses telemedicine services and has studied the practice extensively.

A senior research fellow and health-care scholar at the Mercatus Center of George Mason University, Graboyes recently helped with a study showing North Carolina trails the national average in all four key telemedicine indicators — Medicaid reimbursement levels for telemedicine and telemonitoring; requirements imposed on “telepresenters” — medical professionals who consult with or treat patients remotely; and whether the state allows online prescribing. 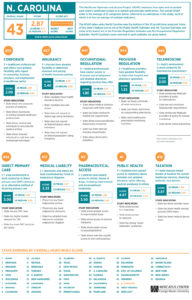 In fact, the Healthcare Openness and Access Project ranked North Carolina No. 43 among the states and District of Columbia for how open and accessible the state’s health care system is for patients and providers. The flexibility measure looked at multiple indicators in 10 subindexes from a free market perspective.

(See a larger version of the chart  here.)

“We don’t portray it as a be-all and end-all index,” Graboyes said. “But we think it’s a valid indicator, and certainly there’s plenty of data in it” that can be evaluated.

Incumbent hospitals and doctors often are, ironically, the most opposed to easing regulations and opening the market to medical professionals, Graboyes said.

“We agree with the study authors that the measures outlined in the Healthcare Openness and Access Project, like any such rankings, should begin conversations, not end them,” said Julie Henry, spokeswoman for the North Carolina Hospital Association.

“The HOAP measures, while informative, do not address quality and safety of patient care. They do, however, point out opportunities for constructive dialogue about work force, telemedicine, and regulatory issues that are vital to hospitals and health systems’ ability to care for all,” Henry said.

The North Carolina Medical Society did not respond to a request for comment.

Resistance to innovation often results from being comfortable with traditional practices, and turf protection, Graboyes said.

In telemedicine, for example, doctors may think, “I don’t want all of these out-of-state doctors cutting in electronically, and taking some of my patient base away,” Graboyes said.

That “raises the question of whether the purpose of the health-care system is to help people improve health, or is it an income program for insiders and practitioners,” Graboyes said.

Still others might be wary of allowing people to have a medical checkup by remote sensing, he said.

States “have an enormous amount of power” over allowing delivery of care by telemedicine, Graboyes said, and they should exercise it.

Indeed, during one of his U.S. Senate confirmation hearings, Georgia Congressman Tom Price, President Trump’s nominee for secretary of Health and Human Services, called telemedicine “one of those exciting innovations” that will allow residents in rural and underserved areas to get access to medical care. “I think we need to accentuate the ability to use telemedicine.”

While the state allows for medical licensure reciprocity with other states, it has “a lot of continuing medical education requirements, it pretty tightly restricts nurse practitioners versus other states that allow nurse practitioners to practice independently, practice broadly, and perform a lot of procedures for which they have been trained,” Graboyes said.

“You have much tighter licensing requirements for opticians, and [are] highly restrictive as far as using midwives,” he said.

Provider regulation also damages the state’s ranking. North Carolina has strong certificate of need laws restricting competition among hospitals and doctors, Graboyes said. There are tight restrictions on compounding pharmacies where drugs prescribed for specific patients are made, and strong mandates on prescription monitoring.

In the corporate category, North Carolina was 25th overall. That’s mostly due to a good score for allowing licensed doctors to split fees with unlicensed individuals. But scores were low in allowing private companies to hire their own doctors to treat employees, and in restricting somebody who’s not a doctor from owning a medical business.

The state ranks ninth for pharmaceutical access, including access to such things as experimental drugs, the decongestant pseudoephedrine, oral contraceptives, and medical marijuana, Graboyes said.

He characterized North Carolina as “sort of middle of the road” in limiting pricing flexibility that insurers have, and for direct primary care, under which individuals pay a flat fee to belong to a medical practice that does not accept insurance, thereby lowering costs. The state scored low for having a high number of mandated health insurance benefits.

North Carolina ranked highest, tied at No. 1 with several other states, in the public health category. It allows access to e-cigarettes, the overdose prevention drug naloxone, and has strong “Good Samaritan” protection when offering medical assistance to others.