Federal justices could decide how much leeway, if any, judicial branch has over partisan map-drawing

Court intervention in congressional redistricting has some lawmakers wondering whether judges are gaveling their way into legislative territory.

On Jan. 9, a panel of three federal judges blocked North Carolina from using its current map during congressional elections. The map, GOP redistricting leaders admitted, was designed to give Republicans an advantage in 10 out of the state’s 13 U.S. House districts. The consolidated lawsuits, Common Cause v. Rucho and League of Women Voters v. Rucho, may have national implications. Wisconsin and Maryland have similar cases before the U.S. Supreme Court, asking the justices to decide whether, or how much, judges can get involved in partisan map-drawing.

N.C. lawmakers frequently butt heads with courts over redistricting. Democrats in the 1990s garnered criticism for drawing maps on the basis of race. In the 1993 case, Shaw v. Reno, the Supreme Court ruled a gerrymander designed to increase the voting power of racial minorities may violate the Equal Protection Clause.

In 2016, judges scrapped the congressional map used in 2012 and 2014. Those districts were racially gerrymandered, they said.

The discussion has since shifted to partisan lines.

The decision could have been timed better, said Rep. David Lewis, R-Harnett, who heads the N.C. House redistricting efforts. 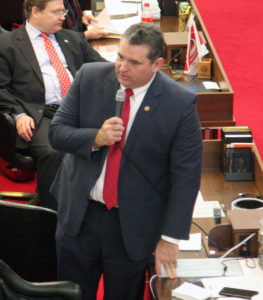 “I think this is a poorly reasoned decision. I am optimistic that the Supreme Court will recognize that and will grant us stay and will grant us opportunity to be heard in their chambers,” Lewis told Carolina Journal.

The legislature filed an appeal with the federal justices Thursday (read the filing here), asking for the panel’s order to be put on hold until the Supreme Court decides on the Wisconsin and Maryland lawsuits. The filing also noted that the candidate filing period would begin before the three-judge panel issued a new ruling.

In July 2017, Wynn led the panel presiding over Covington v. North Carolina, a lawsuit over racial gerrymandering in legislative districts.

The U.S. Supreme Court unanimously upheld the three-judge panel’s ruling in the case that 28 districts must be thrown out as examples of illegal racial gerrymandering. But the Supreme Court also chided the panel for demanding special 2017 legislative elections without offering adequate justification.

“The pattern is that Judge Jim Wynn is going to rule against this legislature every opportunity he gets. I think he was in part trying to overwhelm our counsel who was in his courtroom [Jan. 5] defending the legislative maps. So I am optimistic that the Supreme Court will set things right,” Lewis said.

In February 2016, Lewis publicly proposed that “we draw the map to give a partisan advantage to 10 Republicans and three Democrats, because I do not believe it’s possible to draw a map with 11 Republicans and two Democrats.”

But on Jan. 11, Lewis dismissed contentions of excessive gerrymandering. Any reasonable person could look at the legislative maps and see 87 of 100 counties were kept whole, with only 12 precincts split, he said.

In a 191-page opinion, the panel in the congressional redistricting case directed North Carolina lawmakers to submit new maps by Jan. 24. They also appointed a “special master” to draw a second map at the same time.

U.S. District Court Judge William Osteen, who largely agreed with the opinion, rejected the decision to hire a special master before lawmakers have a chance to redraw the maps. Osteen said the move was premature.

Special masters are outside experts who advise courts. In redistricting cases, special masters can draw alternative maps for the courts. Those maps typically are used only if legislators fail to redraw contested maps according to court standards.

Expecting the majority party to draw districts to its advantage is an old tactic, but it has never been treated as a legal issue, said Andy Taylor, a political science professor at N.C. State University. Legislators have reason to argue that courts are overreaching. Historically, courts have intervened only in cases of racial disparity. Judges largely held back from partisan squabbles, he added.

In 1964, the Supreme Court ruled that political districts must hold roughly the same number of voters. The “one-to-one rule” was then viewed as meddlesome — an attempt to legislate from the bench.

The Wisconsin lawsuit was filed by a political advocacy group seeking to expand the one-to-one rule to cover partisan gerrymanders.

North Carolina may be included in the case, and the Supreme Court’s decision will certainly affect how the legislature draws future maps, said Michael Bitzer, a professor of political science at Catawba College.

“I think this case is pretty significant in that it lays out a potential legal justification for courts inserting themselves into partisan gerrymandering. In the past the courts have been very wary of going into political questions of this nature.”

States are running crazy with partisan redistricting, and the polarized political environment may require an intervention, Bitzer said.

“I think the courts have looked at this as a political thicket, and the concern among conservatives is that if we start inserting ourselves into these political questions, do we run the risk of becoming too political in our decision making? From the liberal side — they would say Congress isn’t dealing with this.”

Kennedy has signaled he opposes partisan gerrymanders and could see the Wisconsin and Maryland cases as an opportunity to address the problem.

In the 2004 case Vieth v. Jubelirer, Kennedy wrote that the goal of redistricting was “fair and effective representation for all citizens.” Since that statement was never defined, “we have no basis on which to define clear, manageable, and politically neutral standards,” Kennedy said.

“The current map is still designed to produce a 10-3 Republican advantage among congressional districts, in a state that is equally divided politically,” Price said. “In fact, Republican legislators admitted in court that they drew both maps for partisan political advantage. That is what the court has now disallowed in an opinion that has national implications.”