Editor’s note: This story has been corrected to state the Amazon Wind Farm is in Pasquotank County. We regret the error.

A new study from the U.S. Navy says expanding the Amazon Wind Farm site near Elizabeth City, as the operator planned to do, may cause interference with the Navy’s radar-tracking facility in southern Virginia.

The Navy released the executive summary of its study July 9. It concluded the interference produced by the existing 104 Amazon Wind Farm turbines is allowable based on a 2014 agreement between the Navy and the wind farm operator Avangrid Renewables. But Avangrid’s to plan to add another 46 turbines could cause problems with the Relocatable Over-the-Horizon Radar.

The ROTHR receiver plays a key role in the military’s tracking of aircraft and ships suspected of transporting illegal drugs and other banned substances to the United States.

“The report says no expansion of the wind turbines at this site,” he said. In addition to the radar interference issue, Brown said he is concerned about compatibility with military training flights in eastern North Carolina. “[Active] military guys are reluctant to speak up. If you talk to retired military, these things [500-foot turbines] are concerns. We need to be cautious about permitting these,” he said.

In January 2017, just before it went into full operation, North Carolina legislative leaders asked the Trump administration to consider shutting down the $400-million, 208-megawatt, 104-turbine project. State lawmakers said the massive turbines in Pasquotank County would interfere with ROTHR.

Massachusetts Institute of Technology Lincoln Laboratory was the lead independent radar specialist organization for the study. The executive summary was four pages, but the Navy would not release the full report. “At this time, there is no releasable technical report to provide and the results were briefed to the Navy-led Mitigation Response Team with technical peer review provided by the ROTHR Program Office,” Navy spokeswoman Katisha Draughn-Fraguada told CJ. 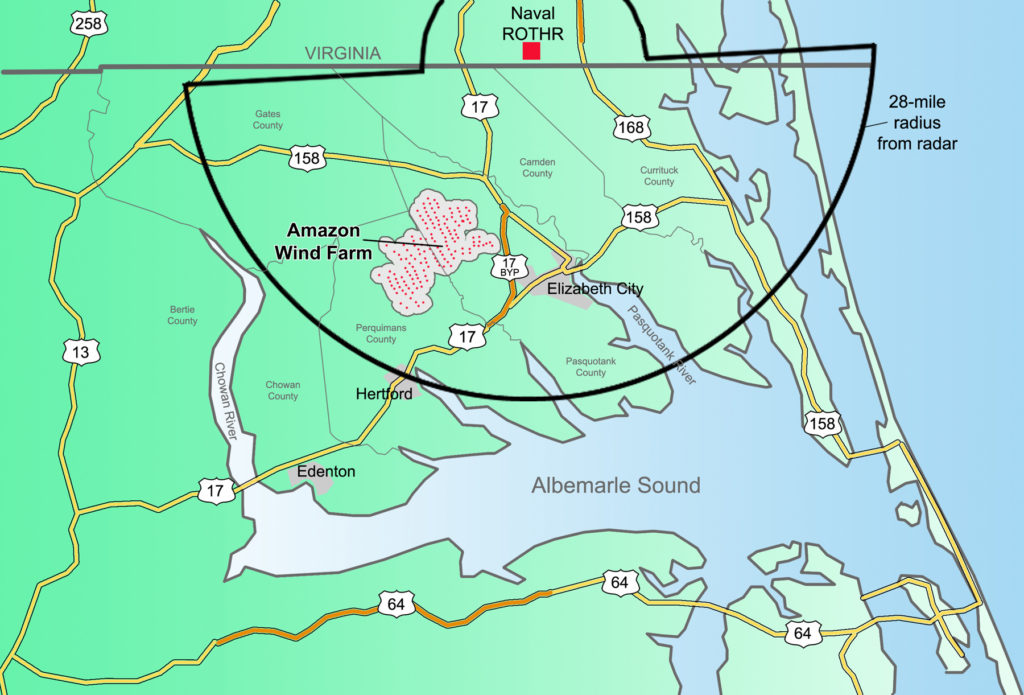 This CJ illustration shows how the footprint of the Amazon Wind Farm could interfere with the ROTHR surveillance project.

In June 2012, the government’s ROTHR Program Office released a study concluding that, to prevent interference with radar operation, a large-scale wind farm should be no closer than 28 miles from a ROTHR facility. The Navy released a map showing the “interference awareness area” relating to the ROTHR receiving facility in Virginia. The Amazon Wind Farm covers about 20,000 acres. It begins about 14 miles from the ROTHR facility stretching to a point about 22 miles away. It is entirely within the 28-mile interference awareness area described in the 2012 study.

The agreement also called for post-construction interference measurements, which formed the basis for the recent study.