In response to a public records request, a document Gov. Roy Cooper said was an email appears to be something else.

The document, one of more than 20,000 pages disclosed in December 2018 responding to media inquiries about the Atlantic Coast Pipeline, indicates a potential crossover between Cooper’s personal business interests and his official duties.

Carolina Journal and private investigators the General Assembly hired to look into ACP issues haven’t seen a true copy of the original document.

In late 2017, Cooper intervened in a dispute between the solar industry and Duke Energy over the terms and conditions for connecting new solar facilities to the Duke system. House Bill 589, passed in June 2017, laid out those terms.

In the document, Strata Solar CEO Markus Wilhelm asked Cooper to intervene in a dispute between Strata and Duke over the interpretation of H.B. 589. Strata Solar operates a solar farm on Nash County property owned by Cooper’s family. Duke and Dominion Power are partners in the Atlantic Coast Pipeline project.

The document (below) was labeled as an email, but it’s formatted like a letter. It doesn’t have address information or the headers, footers, or time signatures a typical email would include. In fact, there’s neither a date nor a time on it. It appears to be a transcript of all or part of another document, but it doesn’t say who prepared it and included it with the 20,000 other pages of ACP documents. 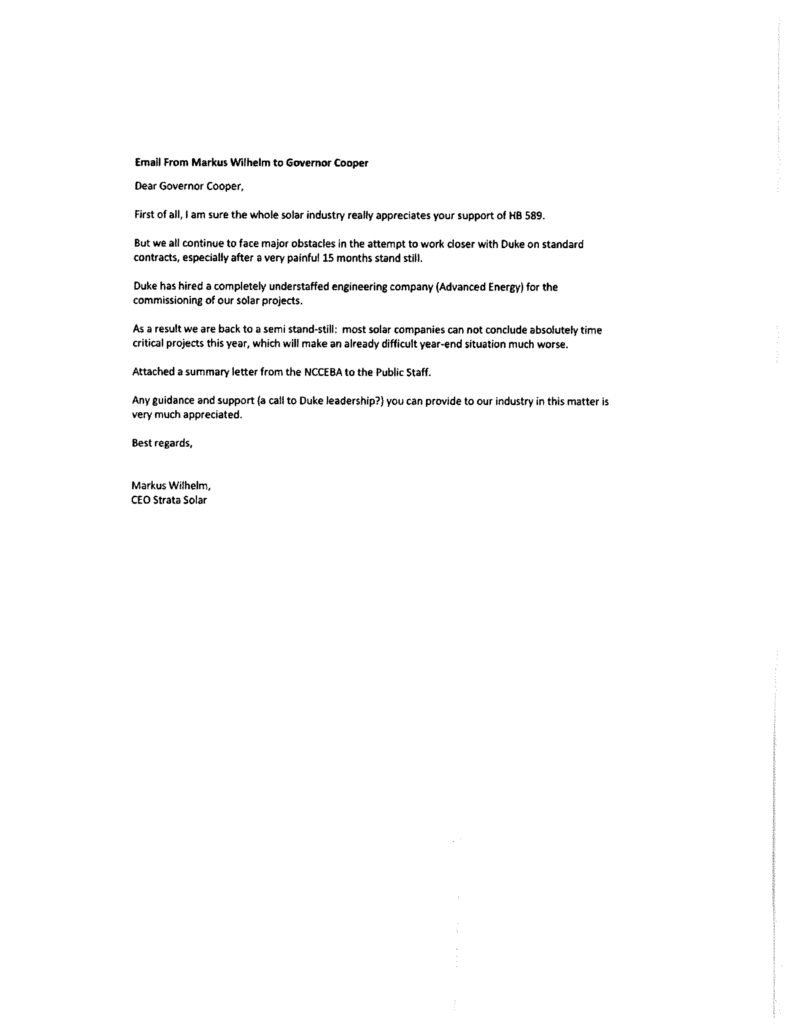 NCCEBA is the N.C. Clean Energy Business Alliance and Public Staff is the advocate for the public in matters before the N.C. Utilities Commission.

CJ and its parent organization the John Locke Foundation haven’t been able to obtain a true copy of the document. Nor have Eagle Intel Services, the private investigators hired by the General Assembly to look into Cooper’s dealings with the ACP. Strata Solar, through its lawyer Hampton Dellinger, refused the request investigators to interview Wilhelm and refused to provide the original email he supposedly sent to Cooper.

The governor’s press office responded to JLF: “The email was sent to an old campaign account and was relayed to state government by former political staff. Our office does not have records responsive to your request.”

The solar dispute was going on at the same time the ACP was trying to secure permits from the N.C. Department of Environmental Quality. A report from an investigation by Eagle Intel Services says Cooper met with Duke Energy CEO Lynn Good on Nov. 30, 2017, and asked her to resolve the dispute with the solar companies. He also asked her to meet with his advisers and create a fund for economic development. “The Governor added that he wanted Duke and the ACP to complete these requests by the end of December 2017 and do so at the same time the required Water Quality Permit was approved,” the Eagle report said.

The 600-mile underground natural gas pipeline, now on hold because of unrelated legal issues, would run from West Virginia to Robeson County, passing through Virginia. The ACP needed environmental permits from the federal government and each state before beginning construction.

In 2018, the General Assembly’s Joint Legislative Commission on Governmental Operations created an ACP Subcommittee to look into how Cooper’s administration handled the water quality permit, the creation of a $57.8 million discretionary fund to be managed by Cooper, and the settlement of the dispute between solar developers and Duke Energy. The subcommittee hired Eagle Intel investigators, who are former FBI and Treasury Department agents. Eagle Intel presented its final report to the Governmental Operations Commission on Nov. 20.

In the report, the investigators said it would be reasonable to conclude Cooper used the power of his office to pressure ACP developers into creating a fund as a condition for getting an environmental permit. The report also concluded, “the information suggests that criminal violations may have occurred,” and “an investigative agency with the authority to compel cooperation and the production of documents could potentially obtain additional information to identify violations of criminal statutes.”

Cooper’s office said the report “relies on inaccuracies and bad facts to reach illogical conclusions.” It maintains that no one in the governor’s office interfered with the issuance of the ACP permits.

After the report was released, Lt. Gov. Dan Forest publicly called on the FBI to investigate the ACP issue. A spokeswoman for the FBI told CJ she would neither confirm nor deny that her agency has received a request concerning the ACP.

Claims about disproportionate benefits fall flatter than the flat tax