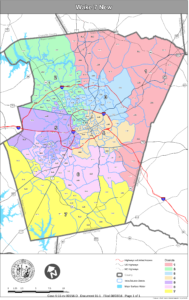 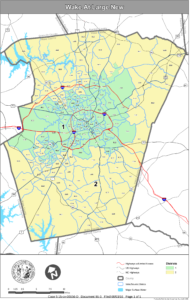 Attorneys for legislative leaders have filed new maps with the U.S. District Court and are urging the judge handling the case to approve the maps for the 2016 election for Wake County commissioners and school board members.

The maps divide Wake County into seven districts and two “super” districts. None of the districts varies in population by more than one person.

The filings come the day after Chief U.S. District Judge James Dever III asked parties in the case to come to his courtroom and suggest how to proceed with the elections for those Wake County offices.

At Tuesday’s hearing, Tom Farr, an attorney for the legislative leaders, told Dever that he could have maps available for his consideration on Wednesday. Anita Earls, an attorney for the plaintiffs in the lawsuit, objected to allowing the new maps to be filed. She wanted Dever to order that the pre-existing districts — the ones in place before the General Assembly redrew the districts in 2013 and 2015 — should be used.

Timing was a major consideration, since the Nov. 8 general election is about three months away and the Wake County Board of Elections needs time to open filing, prepare ballots, and send out absentee ballots.

During an exchange with Earls, Dever expressed concern that the move from odd-year elections to even-year elections for the Wake County school board would not occur if the court reverted back to the previous maps.

“We have a population in Wake County that’s larger than the population in six states,” Dever said, adding that, unless the maps are set quickly, voters might not have an opportunity to elect school board members this year.