In interviews with Carolina Journal on Tuesday afternoon, freshman U.S. Sen. Thom Tillis and state Republican Party Chairman Robin Hayes are confident this week’s Republican National Convention in Cleveland will begin spelling out the differences between the Republican and Democratic visions of America, and that a majority of voters will embrace the GOP’s message.

“This week is the week where we really get defining what our challenge is. It is defeating someone who has sworn to continue the Obama failed legacy. It is reminding everyone that the next president is going to define the Supreme Court for the next generation,” Tillis said. He said it also will remind people the Obama administration has failed to solve the immigration issue, secure our borders, and come up with a winning strategy in the Middle East.

“This is the week we start having these discussions, and between now and November we will convince everyone that Mr. Trump is the right solution and Secretary [Hillary] Clinton is the wrong solution,” said Tillis, who was a delegate for Florida Sen. Marco Rubio but will support Trump in the general election campaign.

Reflecting on Monday’s convention theme, Tillis said, “The whole idea of making America safe again is something I think resonates with the American people. We have serious security issues in the homeland. Some of it is terrorist-inspired and some of it is inspired by divisive rhetoric coming from this administration. People want to feel safe,” he added.

“There are stark choices between Donald Trump and Hillary Clinton,” Tillis said. He noted that Trump has spent his life in business while Clinton has been in politics her entire adult life, and she has a “muscle memory” that is not something we want in our next chief executive.

“We want someone who thinks innovatively, thinks creatively,” he said. He believes that Trump will surround himself with capable people as demonstrated by his selection of Indiana Gov. Mike Pence as his running mate. 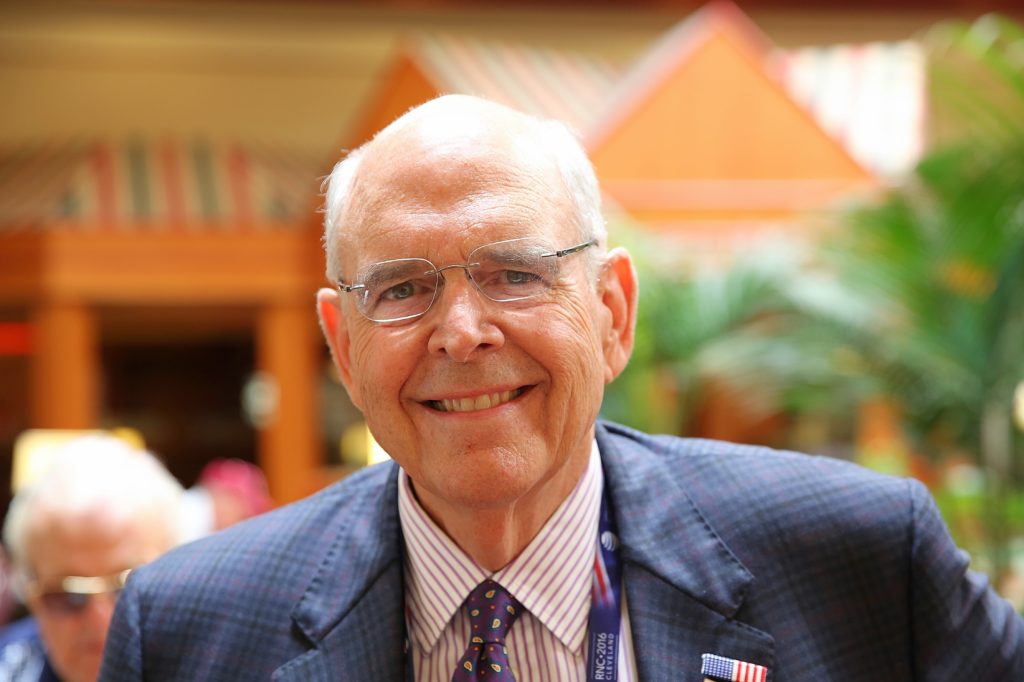 N.C. Republican Party Chairman Robin Hayes says the principles in the Republican Party platform will reassure voters that the GOP can unite and win in November. (CJ photo by Don Carrington)

Hayes agreed with Tillis that the convention “is a great opportunity to showcase the difference between us and the Democratic ticket.” Hayes said while there were several unpredictable aspects of the early phases of the convention, the Republican platform will end up unifying the party.

“Look at North Carolina’s economy. That is what I would wish for the country,” Hayes said. “Gov. [Pat] McCrory has done what I think Donald Trump will do for our national economy by bringing common sense business people to the table, and getting rid of ridiculous executive fiats and worthless government regulations.”

Even though the North Carolina delegation is divided, with 29 delegates committed on the first ballot to vote for Donald Trump, 27 for Texas Sen. Ted Cruz, nine for Rubio, six for Ohio Gov. John Kasich, and one for Dr. Ben Carson, Hayes said that once the nomination is settled, Hayes said he expected everyone eventually will support Trump. “I am proud of our delegation, the largest ever in history. There were a number of them that had concerns [about Trump]. They had another candidate.” He believes those concerns have been addressed through the platform.

(Former state Supreme Court Justice Bob Orr, a Kasich delegate, has told several media outlets he would leave the convention after casting his vote for Kasich and would not support Trump in the general election.)

Of Clinton, Hayes said, “She is dishonest. She has no integrity. She has lied over and over again. That was highlighted once again by those that were there in Benghazi,” where U.S. Ambassador Chris Stevens and three others in his delegation were ambushed and killed by Islamic jihadists.

But Hayes said he also is bothered by the Clinton Foundation’s misuse of the tax code as a nonprofit to enhance her family’s wealth at the expense of national security. “Peddling influence and putting money in her pocket. This is outrageous,” he said.