A new unofficial congressional district map released Monday by a bipartisan panel of former state judges was not received warmly by the members of the General Assembly who have the legal authority to set election district lines.

The proposal, a result of a joint project between Duke University’s Sanford School of Public Policy and Common Cause North Carolina, is an attempt to show how a redistricting plan that made no attempt to offer an advantage to either major political party would work.

The new map, which the panel said did not account for partisan demographics, would produce six Republican-leaning districts, four Democratic-leaning districts, and three swing districts. The makeup of the maps enacted in 2011, declared unconstitutional by federal courts earlier this year, and the redrawn maps being used in the 2016 elections, favor Republicans by a 10-3 margin. (See comparison of maps here.)

“It is difficult to take seriously this charade of ‘nonpartisan’ redistricting from a national liberal interest group suing to strike down a map that splits fewer counties and fewer precincts than any map in modern state history — when Common Cause’s only problem is that it doesn’t elect enough Democrats,” Rucho and Lewis said in a joint statement. “Notwithstanding that their media stunt violates the North Carolina Constitution’s delegation of redistricting to the people’s elected representatives and violates the requirement of ‘one person, one vote,’ it is troubling that it was done with little transparency and far less public feedback from across the state than the open and transparent process conducted by the legislature.”

The “one-person one-vote” standard requires lawmakers to make districts as equal in population as practicable. For congressional districts, lawmakers have taken that to require a deviation of no more than one person from the average population.

The ideal congressional district population, based on the 2010 Census, is 733,499. All 13 of the districts drawn by the panel show some deviation from that figure, ranging from eight people to 715 (see chart). 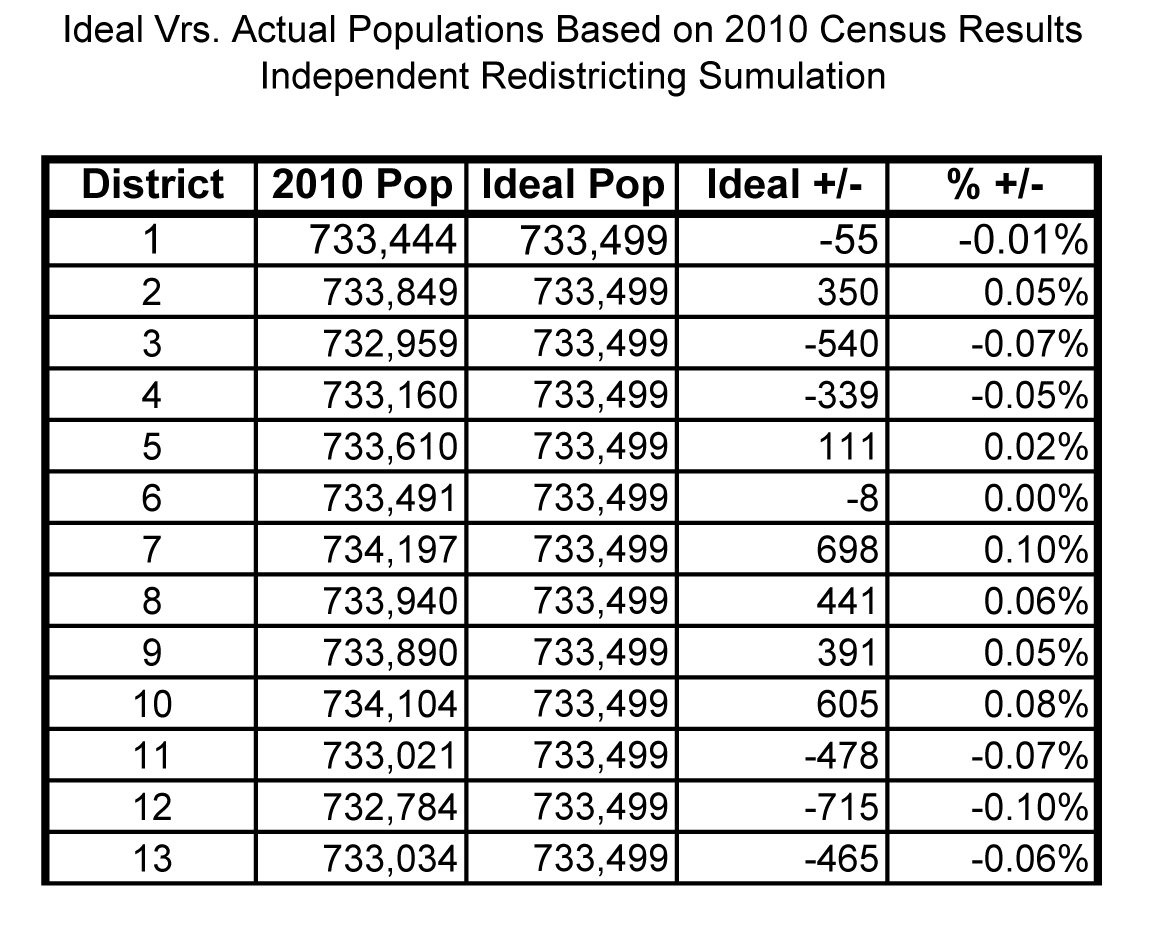 Common Cause N.C. is one of the plaintiffs in a federal lawsuit filed earlier this month challenging the congressional districts. The lawsuit asks federal courts to declare unconstitutional the use of redistricting by political parties to gain a partisan advantage — a principle the judicial branch has not embraced, although recently justices Anthony Kennedy and Ruth Bader Ginsberg have stated concerns about partisan gerrymandering.

“Although we have different political backgrounds, we put that aside to draw districts in a fair and impartial way,” Frye said.

“The members of the panel took very seriously the mission — to create congressional districts without considering politics,” Billings said. “In the process we found that it is not possible to adhere to laws and court decisions applicable to redistricting without crossing county lines.”

Bob Phillips, executive director of Common Cause N.C., said the exercise was undertaken as support for independent redistricting in North Carolina is growing.

“We are seeing growing agreement among voters and political leaders from both sides of the political aisle that we need to take partisanship out of the way voting maps are drawn in North Carolina,” Phillips said. “The work done by these former judges shows how a truly impartial redistricting process could be successfully adopted in North Carolina.”