Workers meander through green rows of plants, glancing sideways as they go and dipping their brimmed caps against the setting sun. A white Chevy pickup stops at the top of the slope, and farmer Shane Whitaker jumps out and walks among the crops.

The hemp plants surrounding Whitaker could be easily mistaken for marijuana, their long green leaves billowing outward like starfish. For him, though, hemp is the new tobacco — a cash crop that may be the face of North Carolina agriculture for years to come.

Tobacco has dominated the state’s farms and industries over the past century, but hemp is slowly taking its place. This year, the state approved 1,300 North Carolina farmers for hemp cultivation, for a total of 13,000 acres and 5 million square feet of greenhouse space, said Blake Butler, executive director of the N.C. Industrial Hemp Association.

Whitaker is also placing his bets in the pot — planting 35 acres of hemp in what used to be tobacco fields in Climax, North Carolina.

Whitaker still grows about 90 acres of tobacco, but hemp will deliver a bigger bang for his buck. While conventional and organic tobacco sell at $2 and $3.50 a pound, hemp could yield a whopping $35. In fact, it could comprise up to 30% of his total earnings this year, despite his varied income sources — the basic field crops of corn, wheat, and soybeans, as well as tomatoes, strawberries, flowers, and pumpkins.

The other incentive for Whitaker, besides the profit margins, is the medicinal benefit. A growing number of people, including members of Whitaker’s family, use cannabidiol (CBD) — a substance extracted from hemp — to treat various conditions, including chronic pain, PTSD, and epilepsy.

“I’m pretty certain that, besides monetarily, tobacco hasn’t helped anyone,” he said. “Hemp, I feel better about growing.”

Tobacco puts N.C. ahead of the pack

North Carolina is one of the top five producers of hemp in the U.S. Kentucky is larger, mainly because hemp was made legal there first, Whitaker said.

“I think North Carolina will pass Kentucky very quickly if we’re not regulated to death,” he said. 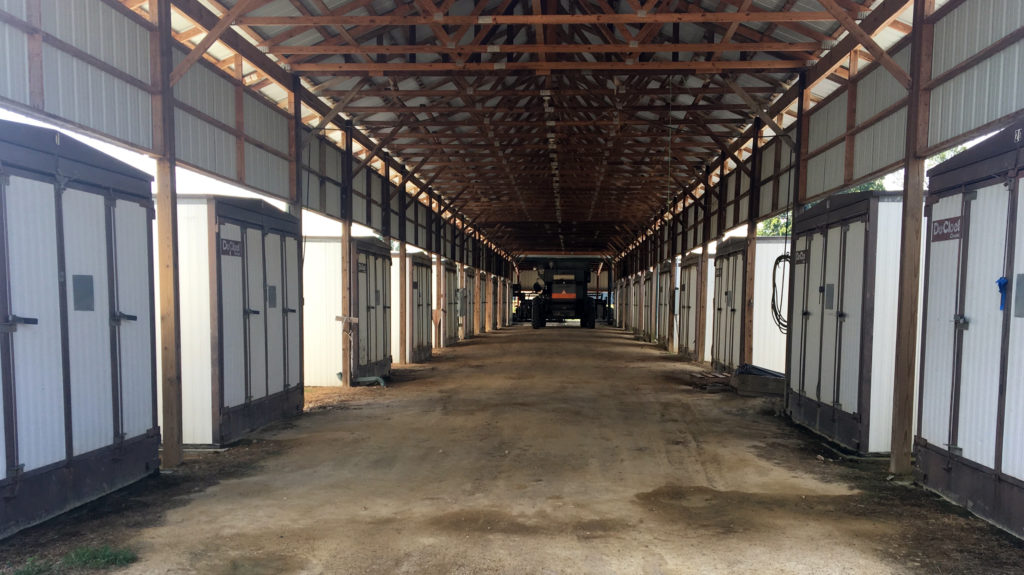 Whitaker estimates North Carolina will be the largest hemp player in the country within five years. That’s because the state has a leg up with its large tobacco infrastructure, which easily translates into hemp production.

Whitaker, like many other hemp farmers in North Carolina, already owns tobacco curing barns, where tobacco plants are dried post-harvest. These barns can also be used for hemp, which saves farmers a lot of money. If Whitaker wanted to, he could expand to 200 acres of hemp without spending a lot of extra cash on equipment.

But farmers in other states who are new to the tobacco and hemp industries will have to spend $50,000 to $70,000 a pop for new curing structures. What’s more, Whitaker’s barns can dry about a half-acre of hemp at a time; newer structures, he says, are often smaller.

“Hemp will take the place of tobacco for us, meaning it utilizes the same equipment, the same curing barns,” Whitaker said. “The same infrastructure that works in tobacco works in hemp.”

After drying comes processing. The hemp from the curing barns is dumped into a machine that separates the flowers and leaves from the stems and rolls it out in processed cubes.  Whitaker may end up buying a hemp processor, which would save him around 30 hours of labor per acre of hemp.

After processing, Whitaker will send a large portion of his hemp to a company that extracts CBD for consumer products. Higher-quality hemp goes directly to smoke shops.

Tobacco used to be Whitaker’s primary source of income. But returns on tobacco have decreased, in large part due to the trade war with China, which bought 30% of the U.S. tobacco crop last year. Whitaker’s depending on hemp production this year to take up the slack.

Hemp farming is not an easy business. For Whitaker’s field laborers, growing hemp is about finding the one in 3,000 plants that could ruin the crop and cost the farm hundreds of thousands of dollars. 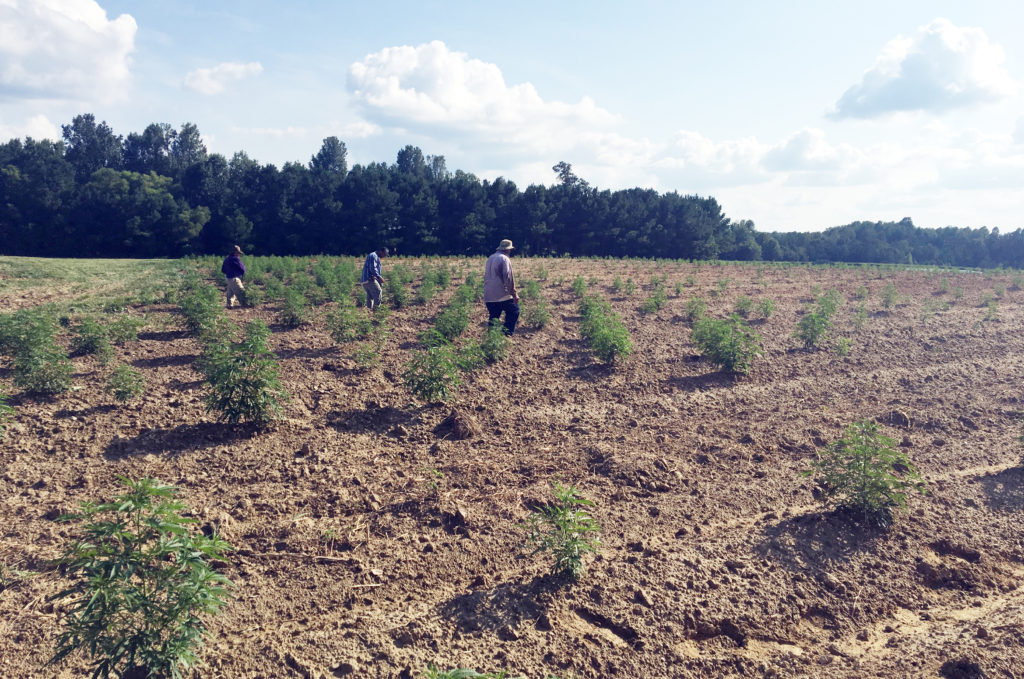 Field laborers search for and tag plants that exhibit both make and female traits, to ensure they don’t pollinate the rest of the field. (CJ photo by Brooke Conrad)

Whitaker motions to a group of workers who have parked their van at the bottom of the hill and are working their way through the rows. They are looking specifically for plants that exhibit both male and female traits. Whenever a worker finds one of these plants, he tags it with an orange ribbon, so the farmers can watch it develop. Once a plant clearly started producing pollen, it’s uprooted.

“One male plant can pollinate a lot of female plants,” Whitaker said. “So what they’re doing is, they’re going through and looking for any male plants and tagging them and getting them out of the field.”

The goal is to produce all female plants — that is, the ones that flower and can be sold to hemp processors. The seeds have already been feminized before planting, which is why they’re so costly — $1 a piece. If any male plants crop up, they’ll pollinate the female plants, causing them to produce seeds and making them less rich in the cannabinoids so valuable on the market.

The seed feminization process is supposed to guarantee only one male plant out of every 3,000. But the Southeastern states have encountered problems with this particular hemp variety. Field laborers on Whitaker’s farm have already had to uproot several male plants, to his chagrin.

“That hurts your feelings when there’s 30 males you’ve got to throw away,” he said. 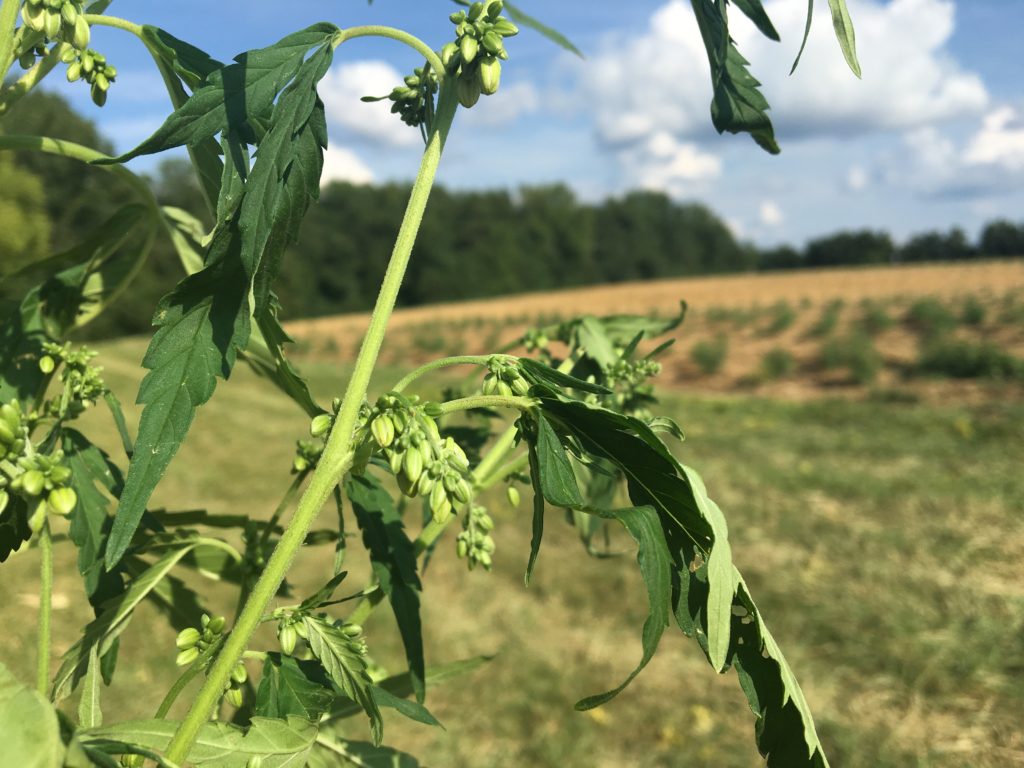 Male plants carry pollen sacks which, if they pollinate a whole field, could cost the farmer hundreds of thousands of dollars. (CJ photo by Brooke Conra)

Whitaker finds a male plant strewn to the edge of the field under a tree. He points to the pea-sized pollen sacks budding between the leaves.

“This one here is further along, and you can actually see all the little pollen sacks,” he said. “If it pollinates a whole field, it could cost you hundreds of thousands of dollars in production.”

Marijuana and hemp are close relatives. They’re like watermelons, Whitaker says. Some have stripes, and some are solid green. The difference is, hemp can’t get you high, as it must be grown at 0.3% or less Tetrahydrocannabinol (THC) to be legal. The same chemical is found in marijuana at higher concentrations, thus the high.

Smokable hemp — the raw version of the plant that’s easily confused with marijuana — is one of the most popular forms of the plant and comprises between 20% and 25% of all hemp grown in North Carolina.

Legislators recently amended Senate Bill 352, which would, in December, ban smokable hemp. Law enforcement has voiced concerns about being unable to distinguish between marijuana and smokable hemp, and Rep. Jimmy Dixon, R-Duplin, said legalizing smokable hemp would effectively lead to legalization of marijuana.

Whitaker opposes the legislative proposal, saying it would cut a gash in his sales, as consumers would have to go out of state to buy the smokable flower. Whitaker attributes his decision to enter the hemp market to the federal legalization of the plant last year.

“If it’s legal to sell everywhere else,” he says. “It should be legal in North Carolina, also.”