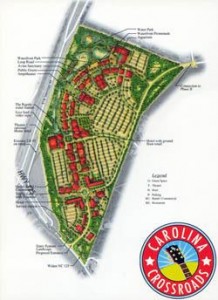 State Treasurer Richard Moore and other members of the Local Government Commission gave final approval to the City of Roanoke Rapids to borrow $21. 5 million to finance the Randy Parton Theatre even though a feasibility study found that other attractions must first be in place for the theater to be viable. The final approval came at the commission’s meeting Feb. 6.

The commission is required by law to determine whether the project is feasible. Included in the Parton file at the time of approval was a copy of the feasibility study that found the theater could be a “market-viable concept” provided that “key elements of the larger proposed development, including two hotels, at least 200,000 square feet of retail, and additional entertainment/amusement opportunities are operational by the time the theater is opened.” (Emphasis added.)

Meanwhile, the Parton theater is completed but almost no work has begun on the other attractions and amenities cited as prerequisites by the Economic Research Associates’ feasibility study. Work on a hotel is under way but no work has been started on any of the retail space.

When Carolina Journal asked about the conditions cited by the feasibility study, Roanoke Rapids Mayor Drewery Beale said the other facilities would not be in place when the theater opens. He said the development company “assured us the development is coming.”

Parton took possession of the completed theater in March. Last week he said the first show will be on July 26. The 35,000-square-foot, 1,500-seat theater is planned to be the anchor of the 1,000-acre Carolina Crossroads entertainment and retail development, off Interstate 95 south of Roanoke Rapids. In addition to the local money borrowed for the project more than $5 million in state funds has been spent to benefit Carolina Crossroads and the Parton Theater.

The financing package also is tied to an Economic Development Agreement to
pay entertainer Randy Parton, brother of Dolly Parton, an annual $1.5 million “artist fee.” Parton, the city, and two private development companies signed the agreement. According to the terms of the agreement, at least $750,000 of Parton’s fee will initially come from money borrowed by the city.

Carolina Journal has been unable to determine whether Moore was aware of the conditions of the feasibility study or of Parton’s fee. Moore’s communication director, Sara Lang, and senior advisor Julie White did not respond to repeated requests from CJ for comment about the commission’s approval process.

The commission staff is housed in the Debt Management Section of the treasurer’s office. According to the treasurer’s Web site, that section “counsels and assists local governments in determining the feasibility of a project, the size of the financing, and the most expedient form of financing.”

The Parton Theater was built with Tax Increment Financing. Roanoke Rapids was the first N.C. municipality to use the newly approved economic development financing tool. In November 2005 N.C. voters approved Constitutional Amendment One, which permits local governments to issue bonds without a referendum for a variety of improvements. The Roanoke Rapids project has been the only project to use the new economic development tool. The Local Government Commission is required to approve each project.

With a TIF project, a public economic development investment is supposed to improve surrounding property values, and the incremental increase in property tax collections are used to repay the borrowed money. With the Parton Theater project, city officials expect the increased property tax revenue to be only a reserve. They expect Parton to make the payments to cover the debt service over a 20-year period. Parton can own the theater for $1 when the debt is fully paid, which can be sooner than the 20-year period.

When told about the feasibility-study conditions not being met, he said those who approved the deal “gave the city the car keys to a vehicle it didn’t know how to drive and then the city ran the vehicle into a wall.”

In this situation “you are giving away public money and the people evaluating the projects don’t have the financial skills to evaluate the money they are giving away,” he said. Plath said that citizens should have a right to vote on deals such as the Parton Theatre funding.

Director of Debt Management Tim Romocki and Assistant Director Jim Baker provided CJ access to their files on the project. Baker acknowledged that he was aware of Parton’s $1.5 million annual fee and that a copy of the Parton agreement was in the file, but he declined to make any additional comments.

State auditor spokesman Chris Mears said Merritt had seen the stories about Parton’s salary but preferred not to comment.

Peeler acknowledged voting for the project, but said he said he had no other comment.

Huskins told CJ he had served on the commission for six years, but resigned in March because of a potential conflict of interest with some of his lobbying clients. He said he was active in the campaign to have Amendment One approved by voters.

“The staff does the research. We rely on their recommendations. We have to assume they are giving us the information. I don’t recall the information on Parton’s payment being presented. I was elated that we had a project. I had gone out and campaigned for the financing tool,” he said.