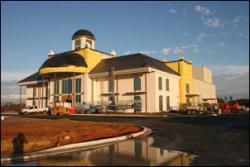 Roanoke Rapids will pay entertainer Randy Parton, brother of Dolly Parton, at least $750,000 per year for managing a new theater bearing his name, according to informed sources, who requested anonymity.

City officials refused to provide a copy of Parton’s contract, although it appears to be a public record.

The Roanoke Rapids Daily Herald and other newspapers reported that in the summer of 2005 “Randy Parton inked a deal with the City of Roanoke Rapids, Roanoke Rapids Entertainment One and Blanchard & Calhoun Commercial to locate his theater in Roanoke Rapids.” Apparently until now, no media have asked to see the contract.

Randy Parton took possession of the new publicly financed Randy Parton Theater in March. No shows have been scheduled for the theater, and no revenue has been generated. Parton was expected to be a regular performer at the theater, but he has not scheduled himself.

The 35,000-square-foot, 1,500-seat theater was planned to be the anchor of the Carolina Crossroads entertainment and retail development, off Interstate 95 south of Roanoke Rapids. Local businessmen Michael Dunlow and George Ragsdale are the owners and developers of what they hope will be a 1,000-acre complex.

Upcoming shows for Carolina Crossroads include singer Trace Adkins in June, a beach music festival in July, singer Gretchen Wilson in September, and a classic Corvette show in October. The events are scheduled for an outdoor concert area, not the Parton Theater.

Other attractions to be built at the complex are a five-story Hilton Garden Inn and the first Black Widow Billiards club, operated by billiard professional Jeanette Lee.

The Parton Theater was built with Tax Increment Financing. Roanoke Rapids was the first N.C. municipality to use the newly approved economic development financing tool.

According to the Daily Herald, the city borrowed $21.5 million for the project. The theater cost about $12.5 million, $3 million was reserved for startup costs, and the remainder went to debt service, reserve requirements, and the costs of issuing the bonds.

Moonlight Bandit Production, one of Parton’s companies, will pay monthly payments to the city and be given the title to the building when the payments are complete.

On Thursday, CJ asked City Manager Phyllis Lee for a copy of the contract. Lee said that she did not have a copy of it, but that she would instruct the city’s contract attorney, Glynn Rollins to release a copy. Friday morning Rollins said that he would release the contract, but that he wanted first to run it by Parton. Late Friday afternoon CJ received a note by fax from Rollins

“I have talked with Parton’s attorney and issues have been raised about the economic development agreement having confidential information in it that I cannot resolve this afternoon. Parton’s attorney will get back with me on Monday,” Rollins said.

CJ again contacted Lee. “My position is that this is a legal matter and we have to follow the advice of our attorney,” she said. CJ was unable to locate Randy Parton to ask him questions about the contract.

Watson appears to be gone

Former Northeast Partnership CEO Rick Watson was responsible for recruiting Randy Parton to Roanoke Rapids. The Partnership is a state-funded economic development agency that seeks to recruit businesses to a 16-county region that stretches from Halifax County to Dare County.

Watson met Parton in 2004 and by the summer of 2005 Parton had publicly agreed to participate in the entertainment district.

By the end of 2005, Watson’s multiple roles became public. The Partnership’s board of directors terminated Watson’s employment in the spring of 2006 after State Auditor Les Merritt issued a scathing report on the activities of the organization.

The report found that Watson had a conflict of interest “by any reasonable person’s definition” in working for the partnership while planning future employment with one his clients, the Randy Parton Theater and Carolina Crossroads Entertainment District project.

On Feb. 16, 2007, Randy Parton filed amended documents that left him as the sole manager of all four companies. The public records do not make it clear whether Watson or the others have any current connection with the Parton project.

Cathy Scott and her husband Mike Scott, former contract employees for Watson at the Partnership, remain involved in the Parton project. Parton recently hired Cathy Scott as the theater manager and Mike Scott as his business manager.

McCrory in the U.S. Senate race: What are his chances?