Parton to Get $1.5 Million Per Year 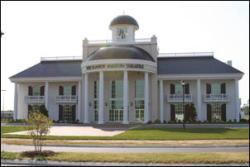 Roanoke Rapids will pay a $1.5 million per year “artist fee” to entertainer Randy Parton, brother of Dolly Parton, for managing a new theater bearing his name, according to a contract obtained by Carolina Journal. In addition, the city is required to provide Randy Parton an “acceptable” fully furnished home and an “acceptable” vehicle.

Last week city officials refused to provide CJ a copy of Parton’s contract. After consulting with David Lawrence, a municipal government expert with the UNC Institute of Government, City Manager Phyllis Lee made the contract and related documents available Tuesday.

Randy Parton took possession of the theater in March. No shows have been scheduled for the theater, and no revenue has been generated. Parton is expected to be a regular performer, but he has not scheduled himself.

The 35,000-square-foot, 1,500-seat theater is planned to be the anchor of the 1,000-acre Carolina Crossroads entertainment and retail development, off Interstate 95 south of Roanoke Rapids.

Parton’s $1.5 million annual fee is to be paid as long as the theater remains operational. The city is also required to provide directly or by private donation, a fully furnished home in the Roanoke Valley for a period of three years and be responsible for all expenses associated with the home. The home must be acceptable to Parton. The estimated value of the home amenity is $2,000 per month. The city also must provide a vehicle acceptable to Parton. According to the terms of the contract the home and vehicle benefits were apparently started in 2005.

Parton’s specific obligations are relatively few. They include cooperating with the city and the developer, procuring professional music and entertainment artists, and producing performances.

According to the contract, Entertainment One has already paid Parton a “good faith deposit” in the total amount of $500,000. Parton is to repay the deposit back at the rate of $100,000 per year with the money being deducted from his artist fee.

The Parton Theater was built with Tax Increment Financing. Roanoke Rapids was the first N.C. municipality to use the newly approved economic development financing tool. With a TIF, a public economic development investment is supposed to improve surrounding property values and the incremental increase in property tax collections are then used to repay the borrowed money. With the Parton Theater project city officials expect the increased property tax revenue only to be a reserve. They expect Parton to make the payments to cover the debt service over a 20-year period. Parton can own the theater for $1 when the debt is fully paid, which can be sooner than the 20-year period.

According to lease agreements, B & C Roanoke constructed the building and sold it to the city. The city is leasing the building to Parton. Parton’s monthly rent payments are to be equal to the city’s monthly payments on the borrowed money.

The city borrowed $21.5 million for the project. The theater cost about $12.5 million, $3 million was reserved for startup costs, and the remainder went to debt service, reserve requirements, and the costs of issuing the bonds. The contract requires the city to use the $3 million reserve fund to cover operating costs and Parton’s artist fee until revenue is sufficient.

Former Northeast Partnership CEO Rick Watson was responsible for recruiting Randy Parton to Roanoke Rapids. The partnership is a state-funded economic development agency that seeks to recruit businesses to a 16-county region that stretches from Halifax County to Dare County.

Watson took on a role with Parton’s Moonlight Bandit Productions, but the Partnership’s board of directors terminated Watson’s employment in the spring of 2006 after State Auditor Les Merritt issued a scathing report on the activities of the organization. Watson apparently no longer has a connection with the Parton Theater.

Cathy Scott and her husband, Mike Scott, former contract employees for Watson at the Partnership, remain involved in the Parton project. Parton recently hired Cathy Scott as the theater manager and Mike Scott as his business manager.

CJ can find no evidence that Parton or the Scotts have any experience managing a theater. Attempts to discuss the future of the Parton Theater with the Scotts or Parton were unsuccessful because messages left for Cathy Scott were not returned.

Why Mark Robinson is smart to focus on first principles