Board of Elections may take action at Tuesday Asheville meeting 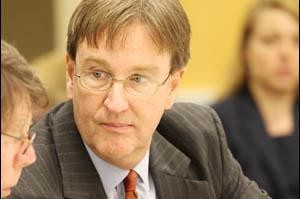 Gov. Bev Perdue’s campaign attorney knew prior to the November 2008 election that her campaign had received more than $28,000 in unreported free air travel over a 20-month period from her friend New Bern attorney Trawick “Buzzy” Stubbs,” according to a report (large PDF file) prepared in June by State Board of Elections investigator Kim Westbrook Strach.

The Board of Elections is scheduled to discuss “possible action on air travel of 2004 and 2008 gubernatorial campaigns” at a meeting Tuesday in Asheville.

Monday, Oct. 20, 2008, Raleigh attorney John R. Wallace — who represented the Easley and Perdue campaigns, and also served as a legal adviser to the North Carolina Democratic Party — was responding to questions from the Raleigh News & Observer about a Carolina Journal Online story published that day on unreported flights that benefited the 2000 and 2004 Mike Easley campaigns.

By the end of the week, Wallace was trying quietly to account for similar unreported flying for the 2008 Perdue For Governor campaign paid for by Stubbs’ law firm. The firm — Stubbs & Perdue P.A. — is named in part for Bev Perdue’s late husband Gary Perdue, who died in 1997. The flights were made using aircraft chartered by the firm. It is against the law for businesses to make contributions to gubernatorial campaigns or political parties.

In 2009, the Perdue campaign started paying for the Stubbs flights and additional undisclosed flights provided by other Perdue donors. The payments occurred after a News & Observer story provided more detail on Easley’s use of aircraft from McQueen Campbell and others. At the election board’s public hearings on Easley’s unreported flights, the board fined Easley’s campaign $100,000 for the unreported flights and the cost of the investigation and referred the matter to the Wake County District Attorney for potential criminal violations of campaign laws. After the hearings, Perdue’s campaign disclosed and paid for additional unreported air travel. [See editor’s note at end of story.]

Strach released a supplemental report (PDF) to the board Saturday. That report concludes that by “the middle of 2007, the Perdue campaign’s process for documenting and disclosing flights had progressed to a sophisticated level.”

The Perdue campaign conducted an audit of its air travel after the Oct. 2009 election board hearing that highlighted Easley’s unreported air travel. The campaign eventually identified a total of 41 flights that were not reported or paid for.

In a Oct. 21 News & Observer follow-up to that story, Wallace, an election law attorney representing Easley’s campaign, told the paper that two payments totaling $11,077 were made in 2005 to Campbell’s company for flying services in the 2004 campaign. That explanation was at odds with the nature of the flying described in the CJ story.

The following day, Oct. 22, CJ tried to discuss the issue with Wallace. He was unavailable by phone, but sent the following e-mail message: “I have a brief due tomorrow and many pending matters related to this year’s elections. I offered comment to the N&O in the absence of any staff familiar with the reports of the 2004 campaign. I doubt that I would have knowledge beyond that which appears in the filed reports of the committee.”

At the Easley hearing, McQueen Campbell testified that the 2005 payments to Campbell’s company were not for flying services but for repairs to Easley’s Raleigh home paid by Campbell.

At the time, Wallace was also a legal counsel to the Perdue campaign. One of those “pending matters” could have been how to handle unreported free flying provided by Stubbs.

Strach’s report found that on Oct. 23, 2008, Stubbs wrote a letter to the Perdue campaign stating that he had reimbursed Stubbs & Perdue P.A. $28,498.04 for airplane transportation provided to the Perdue for Governor campaign. The air travel was offered as an in-kind contribution to the N.C. Democratic Party.

Wallace and Perdue campaign finance director Peter Reichard each were sent a copy. Stubbs’ free flying for Perdue had been going on for at least 20 months, according to documents provided in the report.

The Strach report also said Wallace sent a letter dated Oct 24, 2008 to Stubbs on behalf of the N. C. Democratic Party. It advised Stubbs that the party could not accept an in-kind contribution of $28,498.04. The sequence of events suggests that Stubbs, Wallace, and the Perdue campaign attempted to account for the Stubbs flights, but the Democratic Party rejected the scheme and the flights went undisclosed until late 2009.

According to Strach’s report, “With regard to flights initially paid by Stubbs and Perdue, John Wallace has explained that flights were not disclosed and/or properly paid because the campaign was unaware that Mr. Stubbs was paying for the flights.”

CJ attempted to discuss the Stubbs flights with Wallace last week. He did not return phone calls.

[Editor’s note: This story has been corrected to clarify when the Perdue campaign began disclosing and paying for flights and the ownership of the aircraft contracted for by Stubbs & Perdue.]