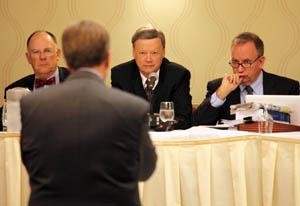 Officials of Gov. Bev Perdue’s 2008 campaign advised New Bern attorney Trawick “Buzzy” Stubbs on a “variety of ways” to handle the nearly $30,000 in unreported flights he provided to the campaign, according to a Board of Elections report.

The report, by Kim Strach, the Board of Elections’ deputy director of campaign reporting, was in the possession of the State Board of Elections on Aug. 24 when it ruled that there was no intentional wrongdoing on the part of the Perdue campaign in its tardy reporting of the flights, which spanned the period from January 2007 to December 2008.

The campaign paid for none of them until May 2009.

In her report, Strach wrote that Stubbs “stated that he had been told a variety of ways [by the Perdue campaign] the travel payments could be handled and that he often was not comfortable with the information that he was being provided.” Stubbs did not disclose fully which campaign officials advised him, when they spoke with him, and what they suggested he do.

The discussion between Stubbs — a seasoned political donor who has reported 255 campaign contributions to state or local candidates or committees over the past two decades — and Perdue campaign officials shows a greater involvement than has been admitted by the campaign in efforts to find ways to report, after the fact, flights that violated state campaign law.

Even though at least 42 flights from Stubbs and others to the Perdue campaigns of 2004 and 2008 were not reported in a timely manner, the board’s three-member Democratic majority rejected a proposal to convene public hearings on travel provided to the Perdue campaign by Stubbs and others. Instead, on Aug. 24 the board fined the campaign $30,000 and found “no intent of wrongdoing.”

Improperly reported and undisclosed private flights provided to former Gov. Mike Easley’s campaign led the board last year to convene public hearings and take testimony under oath from donors and others. As a result, the board fined the Easley campaign $100,000, and made a criminal referral to the Wake County district attorney’s office. Easley left office in January 2009.

This time, the board issued a ruling involving a sitting governor without a formal hearing or sworn testimony.

Perdue campaign officials continue to insist there is no credible evidence that the campaign attempted to conceal flights or other contributions, initially blaming unreported flights on bad recordkeeping and then on sloppy communication among staffers.

Stubbs was a law partner of Perdue’s late ex-husband Gary for roughly 25 years. His firm retains the name Stubbs & Perdue P.A. even though Gary Perdue passed away in 1997. Stubbs is a registered Republican and most of his donations have gone to Republicans.

In an Oct. 21 News & Observer follow-up to that story, Raleigh attorney John Wallace, then representing Easley’s campaign, told the paper that two payments totaling $11,077 were made in 2005 to Campbell’s company for flying services in the 2004 campaign. That explanation was at odds with the nature of the flying described in the CJ story.

The following day, Oct. 22, CJ tried to discuss the issue with Wallace. He was unavailable by phone, but sent the following e-mail message: “I have a brief due tomorrow and many pending matters related to this year’s elections. I offered comment to the N&O in the absence of any staff familiar with the reports of the 2004 campaign. I doubt that I would have knowledge beyond that which appears in the filed reports of the committee.”

At the time, Wallace also was a legal counsel to the Perdue campaign. One of those “pending matters” could have been how to handle unreported flights paid for by the Stubbs & Perdue law firm.

Stubbs initiated his attempt to deal with unreported contributions by sending a letter to the Perdue campaign Oct. 23. At the time, the unreported flights had been taking place for 20 months.

On May 9, 2009, The News & Observer published a story on the former governor’s unreported air travel titled “Easley’s secret flights skirted the law.” The story detailed numerous campaign related flights that McQueen Campbell provided Easley, and identified other individuals who did the same.

On May 27, the Perdue campaign made its first payment to Stubbs for unreported flights.

Strach’s June report stated, “With regard to flights initially paid by Stubbs and Perdue, John Wallace has explained that flights were not disclosed and/or properly paid because the campaign was unaware that Mr. Stubbs was paying for the flights.”

But other information in Strach’s report shows that Wallace knew before the November 2008 election that Stubbs had paid for charter flights for the Perdue campaign. Wallace became aware of the flights in October when Stubbs unsuccessfully attempted to designate them an in-kind contribution to the Democratic Party.

In an interview with Strach, Perdue campaign finance director Peter Reichard said that he had contacted Stubbs and prompted him to send the Oct. 23 letter (PDF) to the Perdue committee in order to get the flights reported.

Wallace received a copy of the Stubbs letter, stating that Stubbs had reimbursed his law firm $28,498 for “payment in kind in the form of airplane transportation for Beverly Perdue.” He included a copy of a check (PDF) in that amount drawn from his personal account payable to Stubbs & Perdue, also dated Oct. 23.

An elections board form titled “Contribution from a Business Account Statement” (PDF) also accompanied the letter. It was completed and signed by Stubbs. The form was designed to allow campaign donors who do not have personal checking accounts to make donations from business accounts without violating the law prohibiting corporate contributions to political candidates.

Stubbs in fact had a personal account — his check to Stubbs & Perdue P.A. was drawn on the account — and yet he completed and signed a form stating: “I do not have a personal checking account, in my name, from which this contribution could be made.” It also contained the following statement: “I understand that by signing this Statement I am declaring all of the above information is true and accurate. Signing this statement with any portion not being true could result in a Class 2 Misdemeanor.” Strach’s report states that Stubbs said he didn’t know who gave him the form to complete.

The Perdue campaign didn’t acknowledge the flights or pay Stubbs for them until May 27, 2009. On fundraising reports, the flights provided by Stubbs are listed as “debts.”

CJ attempted to discuss the flights with Stubbs but he did not return repeated calls to his office.

The heart of the Perdue campaign’s defense was that no one has produced any documents showing the campaign intentionally misrepresented flights. The campaign said it created a system to track flights in 2005 and improved it in 2007. Innocent mistakes led to dozens of unreported flights.

But Strach released a supplemental report (PDF) to the board prior to the meeting concluding that, “by the middle of 2007, the Perdue campaign’s process for documenting and disclosing flights had progressed to a sophisticated level.”

In response to the fine from the elections board, Perdue released the following statement: “For eight months now I have said repeatedly — my campaign had a flawed system for recording flights, and we should have done a better job. But it’s clear there was never any intent by my campaign to conceal any flights or contributions, and today the Board formally recognized that fact. My campaign will pay the fine by the end of the day, and I look forward to putting this matter to rest.”

Not everyone agrees with Perdue’s assessment.

Joe Sinsheimer, a Democratic campaign consultant who has become a government watchdog, said, “This has been an eight-month process. Perdue wanted it to go away, but at the end she wanted a fine to end it. Then she could bury it.”

tags: board of election, Carrington