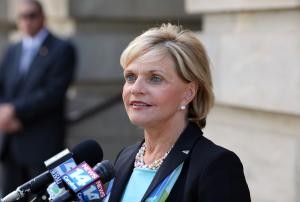 RALEIGH – Saying she would never turn her back on North Carolina’s children, Democratic Gov. Bev Perdue urged GOP legislative leaders to find more money for education in the waning days of the 2012 short session.

“I’m calling on them to do more for the children,” Perdue said during a brief, hastily called news conference held on the Capitol’s east lawn. “The future of North Carolina is at stake.”

The two Republican chamber leaders – House Speaker Thom Tillis of Mecklenburg County and Senate President Pro Tem Phil Berger of Rockingham County – responded by issuing a joint statement urging Perdue to sign the budget that was passed by the General Assembly last week and is now on Perdue’s desk.

“If Gov. Perdue truly cares about the best interests of North Carolina, she will sign this budget,” Tillis and Berger said. “From students attending public schools, to drivers filling up their tanks, to Medicaid patients recovering in our hospitals, every North Carolinian benefits from this budget. A veto would show that Gov. Perdue is more interested in playing politics than in budgeting responsibly.”

Perdue alluded to a Thursday meeting in which she said she invited the two leaders to her office to talk about more money for children and education.

“I was hopeful after that meeting,” Perdue said. “Today, I am sad to say that I received a letter back from the speaker and the pro-tem saying, no thank you; there’s no way that they could make a further investment in children of North Carolina.”

The Berger and Tillis letter, provided by Perdue’s office, said: “We sincerely appreciate the time you spent with us last Thursday and the spirit in which you recommended changes to our budget. There is not a consensus in support of your changes in the legislature. We hope you will give the budget before you careful consideration. It advances many of North Carolina’s priorities and we hope you will sign it.”

Perdue would not say what she planned to do with the budget. When asked specifically if she would veto it, she responded, “Today is not about a veto.”

In the Berger-Tillis response Tuesday, they listed a number of things contained in the budget that would not be funded if the budget bill on Perdue’s desk doesn’t become law.

Those include $126.9 million to fill in discretionary cuts for the upcoming budget year for public schools, raises for teachers and state employees, cuts in the state gasoline tax, and money to plug holes in the state’s Medicaid program.

Barry Smith is an associate editor of Carolina Journal.