More than 1,000 activists march in Raleigh days before Obama inauguration 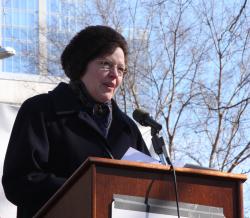 Pro-life activists gathered in downtown Raleigh recently to mark the 36th anniversary of the Supreme Court decision that found a constitutional right to abortion.

The rally was conducted Saturday, three days before Barack Obama, a supporter of abortion access, was inaugurated in Washington, D.C.

“The Obama presidency threatens to cause a delay in [our] quest, but pro-lifers like you don’t give up, and we will succeed in this,” Wanda Franz, president of the National Right to Life Committee, told more than 1,000 pro-lifers who braved below-freezing temperatures to rally in Nash Square.

Speakers criticized Obama’s voting record and policy goals on abortion, particularly his support for the federal Freedom of Choice Act. The bill, which has never been voted out of committee, would overturn all state-level restrictions on abortion.

“The purpose of this terrible piece of proposed legislation is to undo all pro-life laws anywhere in our country, including any that have been passed in your states,” Franz said. “In President-elect Obama, our opponents have found their champion.”

Economic issues trumped other domestic concerns during the 2008 election cycle, polls showed. But a survey commissioned by the NRLC found that 25 percent of those who based their vote on the abortion issue identified as pro-life, compared with 9 percent who identified as pro-choice.

Franz pointed out the movement’s legislative gains since the Roe v. Wade decision in 1973, including the federal ban on partial-birth abortion and state-level parental consent laws.

Pro-life students from area universities also attended. One of them, Ashley Tyndall, a graduate student at UNC-Chapel Hill and president of Students for Life America, said abortion proponents are targeting young people in disproportionate numbers.

While many observers expect abortion restrictions to be rescinded under an Obama administration, some pro-lifers also foresee a tough battle at the state level. “The General Assembly has not been very favorable to our legislation over the last couple of sessions, not since 1997 when we were able to get something through one of the legislative bodies,” said Barbara Holt, president of North Carolina Right to Life.

“We’re going to be watching for legislation that the other side might want to put forward that would expand abortion in North Carolina,” Holt said. “We’re going to try to pass some legislation, but keep an eye out for bills that would make things worse for unborn children.”