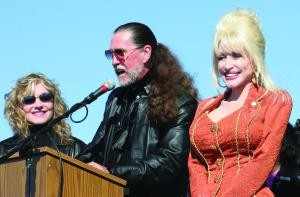 County singer Dolly Parton joined her lesser-known brother Randy Parton on Nov. 11, 2005, in Roanoke Rapids at a groundbreaking ceremony for a city-owned music theater that would bear his name.

It took less than two years for the Randy Parton Theatre to become a white elephant, and its demise offers a cautionary lesson to cities that pay for economic development projects using untested financial vehicles.

Under TIF, a public economic development investment is supposed to improve the values of surrounding property; the incremental increase in property tax collections is then used to repay the borrowed money. The city borrowed $21.5 million to build the 35,000-square-foot, 1,500-seat theater. But when the project failed, Roanoke Rapids was left with a debt to retire, and little revenue to do so.

“In the beginning, city officials gave us a bunch of false information. They didn’t tell us what the feasibility study said. They didn’t give us any of the negatives,” Jim Garrett, a local businessman who initially supported the project, told Carolina Journal. He believes the current value of the theater is $5 million to $7 million, and said that if the city gets an offer it should take it.

The Randy Parton Theatre was to be the anchor tenant of Carolina Crossroads, a 1,000-acre entertainment and retail development, with Randy Parton as the manager. While Randy Parton’s band played regularly, Parton didn’t book other acts to perform and attendance plummeted. As revenues fell, the city fired Parton and saw the facility decline.

Randy Parton’s contract with the city called for Roanoke Rapids to pay him up to $1.5 million per year as an “artist fee” to manage the theater, over and above all other expenses. In addition, the city was required to provide him an “acceptable” fully furnished home and an “acceptable” vehicle.

The theater was completed in March 2007 and turned over to Parton to manage. Parton’s first show with his newly formed band, the Moonlight Bandits, was on July 26, 2007 to a sold out crowd. Parton’s band usually performed Wednesday through Saturday, but attendance eventually declined. Crowds of less than 100 became frequent.

City officials became concerned that under Parton’s management the theater would not generate enough revenue to repay the $21.5 million debt. The city scrapped the original contract with Parton on Nov. 20, 2007, and removed him as the theater’s manager.

The situation quickly deteriorated. On Dec. 6 then-Mayor Drewry Beale asked Parton, who appeared to be intoxicated, to leave the theater just before his show was to begin. A stunned Parton exited the back of the building and encountered a few reporters. He never performed there again and city officials quickly renamed the facility The Roanoke Rapids Theatre.

With the theater project, Roanoke Rapids officials planned for the increased property tax revenue to be only a reserve. They expected Parton to make the debt payments with theater revenues over a 20-year period. Once Parton retired the debt, he could buy the theater for $1.

City Finance Director MeLinda Hite told CJ that the city currently owes $19.9 million in principal. The annual debt service payments of $1.7 million are scheduled to continue until 2027. The city’s current annual operating budget is $14.3 million, and she has developed a recommended budget of $13.5 million for the next fiscal year beginning July 2012. Debt service on the theater would soak up 12.6 percent of the city’s operating budget.

Earlier this year, the city council approved an initiative for a 1-cent sales tax increase that would be dedicated to the annual debt payment. The city estimated that the increase would bring in $1.7 million to $2 million per year. Such a vote would have to be authorized by the North Carolina General Assembly. State Sen. Ed Jones, a Democrat, sponsored a bill allowing such a vote. But Jones withdrew his bill from consideration after Republican leaders in the Senate told him they would not support it.

Former Northeast Partnership CEO Rick Watson developed the concept for the theater and recruited Randy Parton to participate. The partnership was a state-funded economic development agency that seeks to recruit businesses to a 16-county region that stretches from Halifax County to Dare County. Watson convinced Roanoke Rapids officials that they were competing with other North Carolina communities to land the project.

Watson had a one-third ownership interest in Parton’s company, Moonlight Bandit Productions. Watson’s board of directors terminated him in 2006 for working for Parton while Watson was still being paid for his state-funded economic development job.

City officials had bet on Parton’s ability to manage the theater competently and attract enough customers to cover expenses. Before coming to Roanoke Rapids, Parton played at the Dollywood Amusement Park in Pigeon Forge, Tenn. However, he had no experience managing a theater and never invested any of his own money in the Roanoke Rapids project.

Garrett, the businessman who backed the project at the beginning, said he attended nearly every public meeting that discussed the theater. He said he became concerned in early 2006 after reading stories in CJ about the project. Garrett ran unsuccessfully for the council four years ago. He is on the ballot again against sitting councilman Ernest Bobbitt.

“I think we need justice in this town. We need to go after the people that got us into this situation,” Garrett said. He said that in his opinion, Rick Watson, former city manager Rick Benton, and former state Treasurer Richard Moore had key roles in moving the project forward.

Watson solicited a bid from Roanoke Rapids for the project. Benton coordinated the city’s response, and Moore’s office approved the TIF.

CJ asked Bobbitt who he thought should be accountable for the theater project. “That’s old news. We need to look forward. Anything that happened was done in good faith,” he said. “We will keep it open, allow people to rent it, and entertain an offer to buy it if one is made,” he added.

Current Mayor Emery Doughtie had no involvement in the theater project until he was elected in 2009 and had to help find ways to deal with the debt payments. He said the city is trying to maintain the property until it can be sold and put on the local tax records. “We need to move the community forward,” he said. Like Bobbitt, he would not assign blame for the project to any specific persons. He acknowledged that the city soon will have to raise property taxes or make drastic spending cuts for city services.

Former Treasurer Moore told CJ that the legislature gave the treasurer’s office the duty to approve Tax Increment Financing projects. He said his Local Government Commission applied the same approach it used in approving other borrowing by local governments. Moore said the commission’s role was not to second-guess local governments, but only to determine if they could afford a proposed project — even if it failed. “They [Roanoke Rapids officials] got sold a bill of goods by some slick operators,” he said.

Former city manager Benton, who is now the Pender County manager, acknowledged to CJ that as city manager he was the main contact for the city during the negotiations with Randy Parton and Rick Watson. When asked who was to blame for the failed project he said, “I prefer not to comment.” CJ was unable to reach Watson.

Corporate tax should be priority