Randy Parton, whose theater saddled the state with millions in debt, dies

Randy Parton, namesake of one of the worst boondoggles in recent N.C. political history, has died at age 67.

The bass-playing younger brother of cultural icon Dolly Parton died of cancer, according to a statement from the Parton family.

Randy Parton saddled state and local taxpayers with millions of dollars in debt from a performing arts center he arranged in 2005 with subsidies from a regional economic development partnership and money from other investors. Carolina Journal reported extensively on the project.

The Randy Parton Theatre was a 35,000 square-foot, 1,500-seat music hall off Interstate 95 in Roanoke Rapids. Developers pitched the theater as the anchor of Carolina Crossroads, a planned 1,000-acre entertainment, retail, and lodging complex.

Parton took control of the theater when it opened in March 2007. He was to be paid at least $1.5 million a year to manage and perform, with the city including a house and cars in compensation. His band would perform there and other country acts would be scheduled, based on information CJ obtained from the contract city officials initially signed in secret with Parton.

More than a month after Parton took over the theater, his band hadn’t played, no other acts had been scheduled, and no revenue had come in. That summer, singers Trace Adkins and Gretchen Wilson set dates to play at Carolina Crossroads, but not inside the theater.

At the time, the Roanoke Rapids Daily Herald reported the city borrowed $21.5 million for the project. The theater cost about $12.5 million, $3 million was reserved for startup costs, and the rest went to debt service, reserve requirements, and the costs of issuing the bonds.

Parton invested none of his own money, the city borrowed $21 million, and state agencies added about $6 million to launch the project. Then-state Senate leader Marc Basnight, House Speaker Jim Black, and the Department of Transportation under Gov. Mike Easley championed the project.

At first, Parton’s Moonlight Bandits band played to decent houses, but attendance soon plummeted — at times with fewer than 100 in the audience. City officials soon worried about low ticket sales, the lack of advertising and the absence of other acts. In September 2007, officials negotiated a new contract with Parton that significantly reduced his role as manager and lead performer. They also cut his pay from a guarantee of $750,000 annually to $250,000 a year for five years. 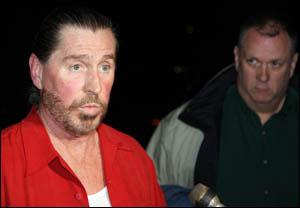 Randy Parton, foreground, Dec. 6, 2007, as he left the theater just before taking the stage. Roanoke Rapids officials claimed Parton was intoxicated. He did not perform there again. (CJ photo by Don Carrington)

In early December, city officials kicked Parton out of the theater as he was taking the stage, claiming he was too intoxicated to perform. It was his final performance there. A couple of weeks later, the Charlie Daniels Band played there — the last major act the venue hosted.

Parton returned to Tennessee, where he continued recording and performing with Dolly.

The city took control of the project in early 2008, renaming it the Roanoke Rapids Theatre. At times, the venue hosted internet sweepstakes games and rented space for banquets, but it never generated enough money to cover the debt service, let alone repay principal on the taxpayer-guaranteed bonds.

In July 2018, Roanoke Rapids sold the venue for $3 million to Chocowinity residents Thomas and Eva McLean, who said they planned to use it as a music venue. Officials told CJ the city still owed $15 million for the property.

The News & Observer reported the theater was leased, not sold. The theater’s website says it’s closed due to COVID-19.

Click here for CJ’s full reporting on the theater complex.