Flags and signs. “Seven Nation Army” and “Smoke on the Water” blaring from speakers in the bed of a pickup. Car horns blaring and Harleys revving.

Dozens of people, including a handful of families, gathering across the street from the Legislative Building, openly violating Gov. Roy Cooper’s Executive Order 121 banning gatherings of more than 10 people.

The scene Tuesday, April 14, at the corner of Jones and Wilmington streets in Raleigh, marked the second public rally in the capital city related to the COVID-19 pandemic. The first was Saturday, as dozens of liberal activists surrounded the Executive Mansion, most in cars, a few on foot, demanding Cooper release inmates to prevent the spread of COVID-19 in N.C. jails and prisons. Several protesters were arrested after tossing wood pallets from their cars.

The Tuesday protest was about releasing everyone from government restrictions imposed to fight the virus, organized by a group called ReopenNC. Maybe 100 cars and half that many more people gathered in the parking lot to exercise their First Amendment rights.

The grass-roots outfit started as a private group on Facebook. It garnered more than 26,000 members in its first five days. At press time, more than 10,000 others were waiting to be added.

They say they represent small business owners and employees who’ve seen their livelihoods taken by coronavirus regulations. They argue Cooper’s executive orders violate their constitutional rights and threaten to destroy the economic hopes and dreams of millions of North Carolinians. 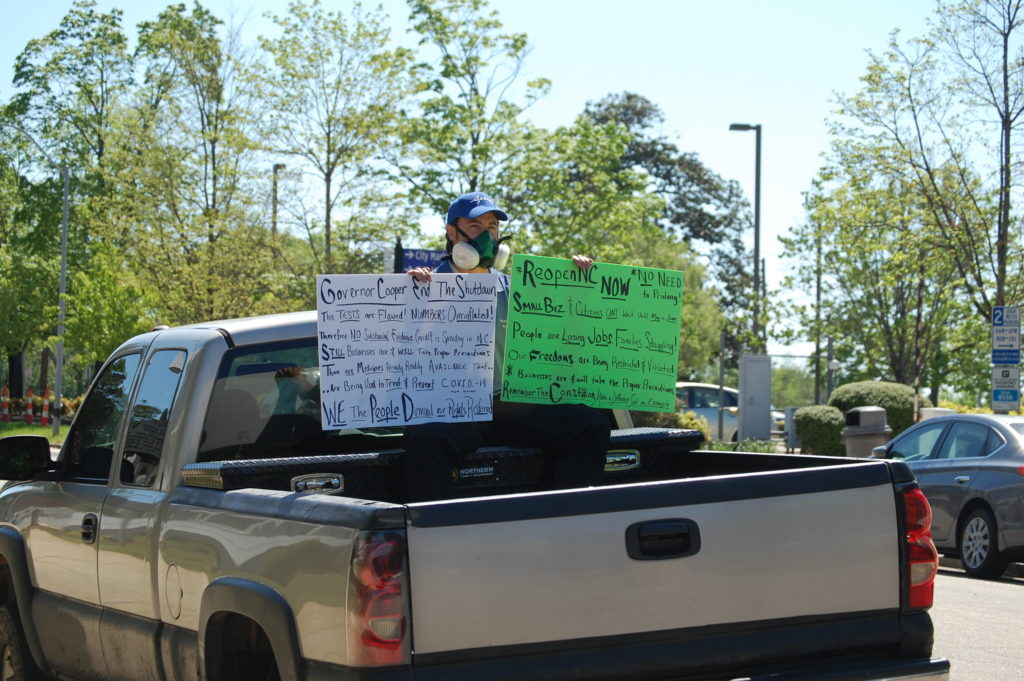 They say they’ll be back. Every Tuesday, from 11 a.m. to 3 p.m. Blasting their car horns for five seconds every 15 minutes. At the corner of Jones and Wilmington streets. Until Cooper lifts the restrictions and reopens the economy.

Another Facebook group, Stay Home NC, cropped up Monday in opposition to Reopen NC. The group argues that continued restrictions are essential for at-risk individuals and medical workers and got more than 2,000 members in a little over a day.

“I personally want my life back as fast as humanly possible,” wrote one Stay Home NC member. “But not at the expense of costing someone their life.”

Other North Carolinians are pushing policy using generic emails, the text copied and pasted from a model provided by the organizers. One email, sent to General Assembly members and Cherry Hospital Director Dale Armstrong in Goldsboro, argued that lawmakers should approve hazard pay and other safety measures for medical workers.

“The recent cases at some [Department of Health and Human Services] facilities have heightened the worry of the frontline workers,” the email read. “Now is the time to step UP safety measures and provide all frontline workers with proper PPE, including surgical masks. Cloth masks used for source control [are] not sufficient to protect the workers.”

Another email to lawmakers pushed for help for students and teachers across the state. The proposals include expanded meals, technology, and summer learning opportunities for K-12 students, food, housing, and child care assistance for college students, and removing the copay for working families receiving child care assistance.

“The state has a responsibility to deliver a sound basic education to every child,” the email stated. “Doing so will sustain our future civic and economic well-being.”

Another public Facebook group “Health Care Justice-North Carolina,” whose members tout Medicare for All as a primary policy goal, is soliciting lawmakers’ attention in the wake of COVID-19. A group administrator, Tera Long, shared a Guardian article from late March, arguing the pandemic-induced recession proves health insurance should no longer be linked to a person’s job. Long said she reached out to several of her representatives over Facebook.

North Carolina mobilized more quickly than other states in its citizen movement to reopen the economy, noted Chris Cooper, a political science professor at Western Carolina University. That’s partly because political activism on both sides of the aisle is relatively high.

It’s also due to the fact North Carolina ranks near the bottom of the list in terms of COVID-19 cases and deaths per capita, said Andy Taylor, political science professor at N.C. State University.

“You could make the argument that the governor is a victim of his own success,” Taylor said. “People here are more willing to move on than they are in other places because the spread is so minimal.”

North Carolina was lucky to get the virus late, compared with other states, Taylor said. The state also lacks the global connections and dense, urban areas found in other states, which often contribute to the spread of the virus.

Smith is from Morganton, with fewer than 17,000 residents. Morganton is largely composed of small businesses, many of them crippled by economic shutdowns. Smith projected many won’t return, even after the economy reopens.

“A lot of people have invested their life’s savings to have their dreams come true and have their businesses open, only to have them shut down,” she said.

North Carolina’s emergency declaration is legal, Cooper said. The question is whether public opinion is with the governor.

“I think right now people have accepted this is the reality,” Cooper said, referring to the statewide stay-at-home restrictions. He said the governor’s job approval currently exceeds that of President Trump, per a Daily Kos analysis.

Most states are set to loosen their restrictions by April 30 or earlier. But several of those states previously extended their deadlines and could do so again. Virginia has already pushed its restriction-lifting date to June 10.

For many North Carolinians, the end of April is long enough, Smith said.

“As law-abiding citizens we have entertained this through the past 30 days, and we feel this is asking a lot of N.C.,” she said.

Tuesday’s protest didn’t make its scheduled closing time — 3 p.m.. A Raleigh police officer told the demonstrators they were violating the ban on large gatherings. He said he would grant some leniency if people agreed to stand at least six feet apart.

Some complied. Many didn’t. Just before 1 p.m., a half-dozen or so officers cleared the area, arresting Monica Faith Ussery of Holly Springs.

The city later issued this statement: