A bill that would ban schools from promoting more than a dozen controversial views in public schools is one step closer to a full vote in the state Senate. It cleared the Senate Education and Higher Education Committee through a voice vote on Tuesday, August 24.

The bill doesn’t mention the words “Critical Race Theory,” but supporters have signaled that CRT is linked to at least some of the ideas teachers and school administrators would be banned from promoting.

The passage of House Bill 324, Ensuring Dignity & Nondiscrimination/Schools, followed debate between Republicans and Democrats over the scope and meaning of the measure, including a particularly testy exchange between Republican Lt. Gov. Mark Robinson and Sen. Jay Chaudhuri, a Democrat from Wake County. 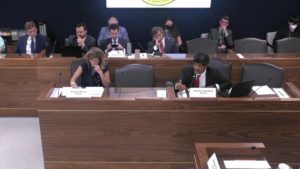 Robinson was invited to the committee meeting to voice his support for H.B. 324 in light of the findings from the F.A.C.T.S. task force’s first report on bias and indoctrination in public schools. Chaudhuri challenged the basis for bringing forward the bill in the first place, saying that the measure and the F.A.C.T.S. task force could result in “a witch hunt” of public school teachers.

“This week marks the first week of our kids going back to school,” Chaudhuri said. “I feel that we should be spending time honoring our children. Instead, we are spending time debating a Fox News-driven issue that’s more about fear-mongering. It’s turned into a fishing expedition of our public school teachers.” 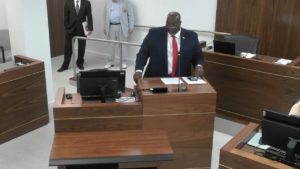 “We didn’t hide in the dark and do this task force,” Robinson responded. “We didn’t ask to do it. Parents, teachers, and students of North Carolina demanded it. And to sit here and call it a Fox News-driven issue — when I have stood with teachers who have cried because they feel like their jobs and livelihoods and professions have been threatened — for you to call it that is an insult. An absolute insult.”

Chaudhuri’s home county of Wake produced more than 20% of the complaints from families and teachers to the task force, the most of any single county in the state.

Rather than banning or requiring certain topics in the curriculum as states like Texas have done, H.B. 324 more simply prohibits public schools from teaching that one race or sex is inherently superior to the other.  The bill language affirms that “students, teachers, administrators, and other school employees respect the dignity of others, acknowledge the right of others to express differing opinions, and foster and defend intellectual honesty, freedom of inquiry and instruction, and freedom of speech and association.”

The bill does not address Critical Race Theory by name but identifies its ideas which teach that racism and sexism are foundational to American history, culture, and government while portraying the white race as inherently oppressive.

“House Bill 324 sets guardrails against the most extreme forms of indoctrination, but the only enduring way to fight back against Critical Race Theory and its presence in our schools is to shine a spotlight on it. When people are exposed to the substance of Critical Race Theory and what it preaches, they don’t like it,” said Senate leader Phil Berger, R-Rockingham.

Berger has previously said that he will combat the teaching of Critical Race Theory “with everything that I have.”

Prior to the vote, lawmakers heard from members of the public, all of whom voiced opposition to Critical Race Theory and encouraged the passage of H.B. 324.

Natalya Androsova is a Wake County resident who emigrated from Russia 22 years ago. Her daughter is a sophomore in the public school system, but she pulled her out last week and opened her own homeschool academy, one of the reasons being her concern about Critical Race Theory.

“I grew up in the Soviet Union, and I have experience firsthand in indoctrination in communist propaganda,” Androsova said. “It was everywhere, including in school curriculum, mostly language arts and social studies. Without noticing it, I became a product of this propaganda, truly believing the Communist Party was only good. I believed my teachers because I loved them and I trusted them.”

“I see the same pattern here in our public schools,” she said. “Marxist ideology called Critical Race Theory is embedded in the curriculum and thought. As an aware parent, I cannot allow my child to absorb any of that ideology, because it destroys the dignity of human being.”

A different version of H.B. 324 passed the House in a party-line vote of 66-48 on May 12. The bill must clear the Senate Rules Committee next, but a full vote in the Senate could come as early as this week. The House would have to vote to accept the Senate’s revisions before the bill could head to the governor’s desk.