Several prominent school-choice advocates gathered Wednesday, June 5, at a panel on school choice hosted by the libertarian Cato Institute and the Civitas Institute.

“School choice should be the rule, not the exception,” said McCluskey, “North Carolina relative to other states is doing a pretty good job.”

S.B. 609 points to further progress. The legislation, which passed the Senate in May by a 27-18 margin, would do three things: allow 4-year-olds to become eligible for Opportunity Scholarships, Special Education Scholarships for Children with Disabilities, and Personal Education Savings Accounts; raise the household income limit to 150% of the amount required to qualify for free or reduced lunch; and eliminate the cap on scholarship funds for students entering kindergarten or first grade.

Egalite argued that the legislation faced some challenges, especially in how it addressed parents concerned about earning too much money to stay eligible for the program.

“You want families to be able to take on a second job or take a promotion,” Egalite said. “Parents are facing hidden costs and take on more to make those costs, but they are afraid of surpassing the income eligibility mark.” Parents also must take on other costs on top of the scholarship awards, such as school uniforms and school supplies.

Egalite suggested an amended version of S.B. 609 could include a qualification income bracket and a higher certification bracket so parents aren’t discouraged from taking a pay raise or picking up an extra job. Another option included making parents qualify only once and not have to undergo income recertification checks.

“We want to continue to expand,” Krawiec said. “For those folks who want choice, we need to continue to expand it for them and open that door. Income shouldn’t be a barrier to choice.” She also spoke of building a bipartisan coalition, which prior to his defeat last year included Ford.

“We try to be bipartisan and cross the aisle, but when we do we get popped,” Ford cautioned. “I’m determined to find more reasonable people on both sides of the issue to have a discussion and empower families.”

Egalite says the numbers portraying the success of North Carolina school choice efforts speak for themselves.

A study she cited (see slide, below) shows that of 16 gold standard evaluations, nine found improvements, three had negative findings, and four found no change. The direct effects of this include higher test scores, college attainment, and college graduation rates. Meanwhile, among 22 studies of competitive effect, only one found a neutral and none found a negative impact. 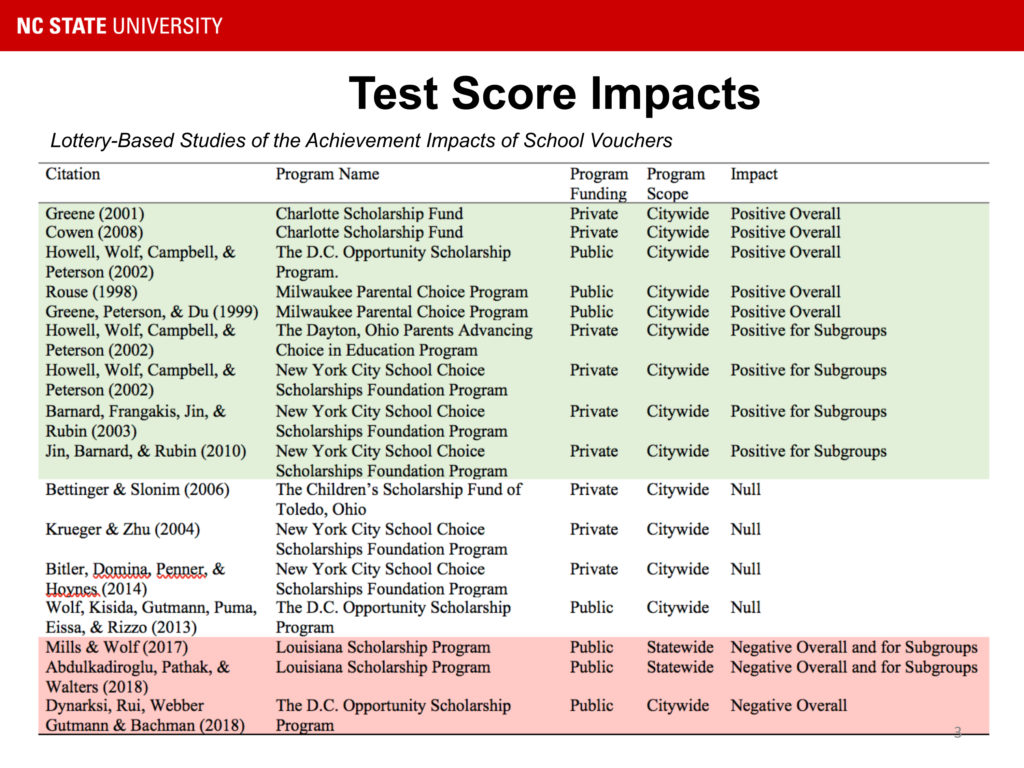 These students, according to the research, are overwhelmingly African-American with a median adjusted income of $31,000.

“I don’t believe in silver bullets. I don’t believe there is one solution to solve the education crisis we are in, but I don’t have it in me to ignore a failing system. I’m trying to figure out how to wake people up.”