Senate Democrats on Wednesday walked out of the chamber moments before their GOP colleagues voted unanimously to adopt a state law reversing a newly passed Charlotte ordinance allowing transgender people to use whichever public bathroom they choose.

The Democratic exodus was underscored when the Senate reading clerk called the roll. When each Democratic senator’s name was called, there was a moment of silence. Republicans responded with an “aye” when their name was called.

Normally, roll call votes are taken electronically. Democratic senators complained that they’d been left out of the process of drafting the legislation. Republican leaders didn’t unveil their bill until Wednesday morning.

The Democratic walkout resulted in the Senate passing the measure by a unanimous 32-0 vote.

In contrast, 11 House Democrats joined 71 Republicans in voting for the measure. It passed that chamber 82-26.

“Today, Senate Democrats followed the lead of Roy Cooper and refused to make protecting the safety of our children a priority,” Berger said. “We’re not sure if their rhetoric was stronger than their convictions or if they expected to be embarrassed by a majority of Senate Democrats joining Senate Republicans in voting for common sense. But either way, running out and ducking this vote is a serious breach of their duty to their constituents.”

McCrory’s re-election committee released a video of a statement on the Senate floor by Minority Leader Dan Blue Jr. of Wake County making what the governor’s campaign team said was the Republicans’ case: Cooper could have prevented a special session by challenging the ordinance in court.

“If the city of Charlotte had no authority to do this, it would have taken 15 minutes to get a temporary restraining order, 10 days to get a preliminary injunction, and if it was so clear, then a couple of weeks later to get a permanent injunction… without scaring the bejeezus out of the citizens of this state,” Blue said.

As lawmakers and the governor discussed the prospect of a special session, Cooper said he saw no need for the General Assembly to overturn Charlotte’s ordinance, instead suggesting that lawmakers had more pressing matters at hand. He released a video on Wednesday condemning the legislative action.

“The governor lit the match and stood aside while the file blew out of control,” Cooper said.

“The radical left wing groups and the liberal politicians like our attorney general are afraid to stand up to the political correctness model and fight for common sense,” Newton said during a Senate committee meeting. “They refuse to take action to protect the safety and the privacy of women and children.”

Opponents of the bill argued that the proposed new law was unnecessary and was based on unfounded fear.

“Let’s drill down and get to what the intent of this particular legislation is,” said Rep. Rodney Moore, D-Mecklenburg. “This is really not about bathrooms. This is about fear.”

Moore said that similar ordinances have been passed in more than 200 cities across the nation. He said, to his knowledge, there have been “not catastrophic incidents of assaults, of rapes or anything.” He said the argument that the legislation had to do with public safety doesn’t pan out.

Rep. Dan Bishop, R-Mecklenburg, said the city of Charlotte did not have the authority to enact the ordinance.

“The power of localities in North Carolina comes from delegation by the General Assembly,” Bishop said. “In the case of the Charlotte ordinance passed in February, they exercised a power that had never been delegated to the city of Charlotte, or any locality, except for a few in their charter, but not Charlotte.”

“It protects privacy,” Stam said. “It also clarifies what units of local government can do on a couple of disputed issues.” Stam said that the state needed a consistent law statewide so that businesses that want to grow or expand don’t have to have different rules in different places.

The legislation requires single-sex multiple-occupancy bathrooms and locker rooms in public schools and public agencies, and requires students to use the facilities based on their “biological sex,” or the sex listed on a birth certificate. Bishop said that if someone has sex-reassignment surgery, then they can amend their birth certificate to reflect their sex status.

The legislation also would override any local ordinances related to discrimination practices. It prohibits localities from requiring private contractors to abide by regulations other than those required by state law. Supporters of the bill emphasized that private businesses would be free to set their own policies regarding access to their bathrooms. 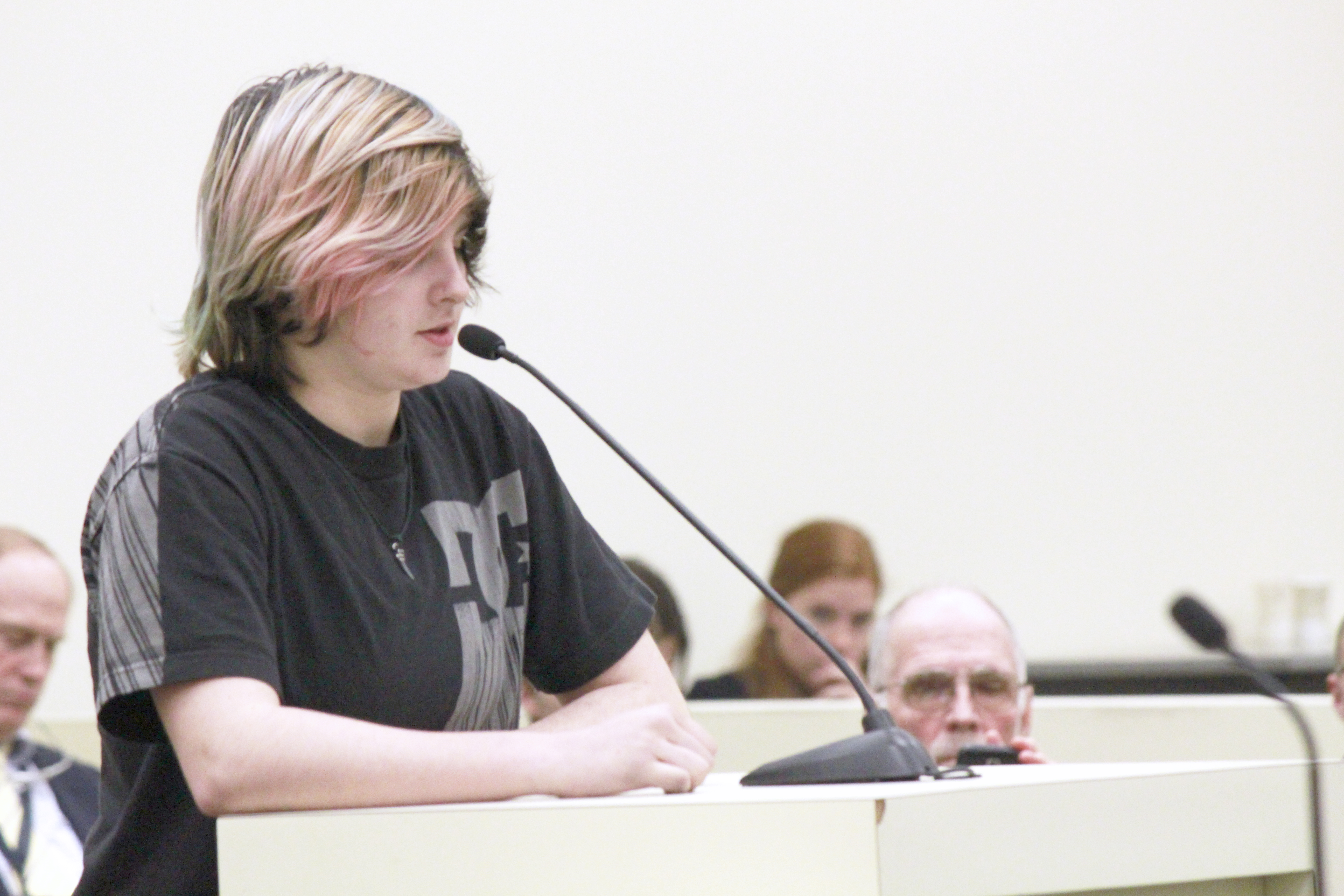 Fifteen-year-old Skye Thompson of Greenville speaks before a Senate committee, telling members about his experiences as a transgender male. (CJ photo by Kari Travis)

During public comment periods, people on both sides of the transgender bathroom issue made impassioned please to lawmakers.

They included 15-year-old Skye Thompson of Greenville, who told a Senate committee that he is a transgender male.

“I’ve felt bullied my whole life, and now I worry that my own state lawmakers are bullying me as well,” Thompson said. He said transgendered kids are bullied on a daily basis.

Donna Eaton of Cary told the committee that she was molested as a kid. “I lived in fear of finding a man in my bathroom,” Eaton said.  She said when she recently visited Massachusetts, a transgendered person was in the bathroom. “Seeing this man in the bathroom brought me right back to where I was years and years ago.” She said without the bill overturning the Charlotte ordinance, people with malicious intent would be allowed to masquerade as transgendered and take advantage of people