Gets through chamber when two Republicans fail to show 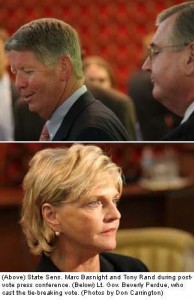 Senate debate over a state-run lottery yesterday was marred as much by contention over procedural issues as it was over the game itself.

The chamber barely passed a measure that will institute a lottery in North Carolina after many years of holding out, while neighboring states had gradually adopted their own games. The majority of Democrats who wanted it were only able to win approval because two Republicans opposed to the lottery were absent: Sen. Harry Brown of Jacksonville and Sen. John Garwood of North Wilkesboro.

GOP members who were present accused Democratic leadership of reneging on a promise to not consider any further business this session. Sen. Harris Blake, a Pinehurst Republican, implied that Senate President Pro Tem Marc Basnight acted unethically by pressuring Garwood to not pair his vote with a lottery-supporting Democrat in order to allow passage.

“This burden will be on you and not on me,” Blake said on the Senate floor, addressing Basnight.

When members of the Senate are unable to be present for a session, they sometimes “pair” their votes with a Senator on the other side of an issue, so that their missing vote will not affect the outcome. It is considered a common courtesy regularly extended to both parties. However, Garwood and Brown did not seek to pair their votes, which permitted the majority of Democrats to achieve a 24-24 split. The tie was broken by Lt. Gov. Beverly Perdue, a Democrat who presides over the Senate.

Gov. Mike Easley, whose administration has lobbied heavily for a lottery to support education initiatives since he assumed office in 2001, will sign the bill into law.

“This is a win for the 4-year-olds who require pre-K (education), the low-wealth counties that need assistance with school construction and the disadvantaged students trying to go to college,” Easley said in a press release.

Republicans said Democrats, except for the five who joined the GOP in opposing the lottery, were trying to sneak the bill through since Brown and Garwood were absent. Garwood is reportedly suffering from a leg infection and was told by a doctor to keep it elevated. Brown left for his long-delayed honeymoon after last week’s session ended, and was unreachable.

Republicans attempted a series of procedural changes and objections to get a vote delayed or stopped, but failed repeatedly on near party-line votes. Democrat leaders said that a rule that prevented two votes on a bill in the same day was suspended last week, allowing the necessary consecutive votes for passage.

After those measures failed, several Republicans spoke in objection to the legislation, saying a lottery would prey on the poor.

“The aim of government is to protect its people, not to fleece them,” said Sen. Ham Horton, R-Forsyth.

Sen. Charlie Dannelly, a Charlotte Democrat, doubted the GOP’s sincerity about their concern for the poor since they failed to support hikes in the minimum wage.

“If you want to do the right thing,” Dannelly said, “pay poor people a living wage.”

For their part, Republicans questioned whether lottery revenues would really provide new funding for education. Sen. Robert Pittenger, R-Mecklenburg, said by 2010 fiscal experts expect the state to be carrying a $2 billion budget deficit, and that by then the lottery would become just another source of revenue.

“This is no more for education than it is for filling the hole,” Pittenger said.

Senate Minority Leader Phil Berger, an Eden Republican, called the lottery issue a diversion from other educational problems that Democratic leaders have failed to address, such as consistently poor student performance on tests. He said the lack of a lottery had been an excuse, which they would no longer be able to use.

He also doubted that the money would end up where advocates said it would go.

“The money for education is not going to increase,” Berger said.

Paul Chesser is associate editor of Carolina Journal. Contact him at [email protected].