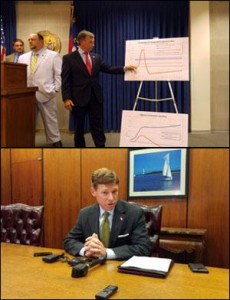 RALEIGH – Senate leaders on Wednesday eschewed Gov. Pat McCrory’s request for a $1.4 billion bond referendum, offering instead their own plan that would increase spending on highway construction and maintenance.

“We believe there’s a better way to achieve this goal than the proposal to borrow $1.4 billion spent on a few piecemeal projects,” said Sen. Bill Rabon, R-Brunswick.

Rabon said that the McCrory bond plan would put the taxpayers on the hook for $2.2 billion over the next 20 years, factoring in interest payments.

Lee Roberts, McCrory’s budget director, countered the Senate leaders’ assertions, saying that the governor’s plan would not result in the state spending less on roads.

Senators plan to increase spending on road construction and maintenance by discontinuing the transfer of money from the Highway Fund to the General Fund to pay for the State Highway Patrol. In addition, they plan to increase fees charged by the Division of Motor Vehicles, such as those for driver’s licenses, vehicle registration, and titles.

“Paying interest on the governor’s bond significantly reduces the funds available for building roads going forward,” Rabon said during Wednesday’s press conference. “In fact, 80 projects that have scored high enough to be included on the Department of Transportation or the Board of Transportation’s 10-year plan presently approved would be adversely affected by this bond package.”

Rabon added that some of the projects in the bond package were politically motivated.

Roberts said that the projects chosen for the bonds were ones that rated highly on the state’s Strategic Transportation Initiative Plan and ones that had environmental impact statements ready, so that construction could begin quickly.

“The idea behind that obviously was just to make sure that money was going to be put to work as quickly as possible,” Roberts said. “It’s not correct I think to characterize the list that’s in our bond proposal as a return to the past of just cherry-picking projects for political reasons.”

Roberts said given that interest rates are low, now is a good time to borrow money to kickstart the transportation projects.

Roberts said the administration is hoping to put the bonds on the ballot this November, when the polls will be open in many municipalities across the state to elect mayors and city or town council members. He said waiting until next March, when the state is expected to have a presidential preference primary, could result in the DOT having higher interest rates on bonds than if the referendum were held this fall.

The Senate plan was included in its version of the state budget. House and Senate leaders are working on negotiating a compromise between the two chambers’ versions of the budget.

The new fiscal year began July 1. Lawmakers have a temporary measure in place to continue giving the state authorization to spend money. That measure expires Aug. 14.