N.C. Supreme Court rejects call to review legislative districts, so they're set for next year's election

North Carolina is all set for its 2020 congressional and legislative elections. For now.

The state Senate adopted the House’s version of the new congressional map Friday, Nov. 15, without approving any additional amendments. In addition, the N.C. Supreme Court has decided not to hear an appeal of redrawn legislative districts plaintiffs challenged as partisan gerrymanders.

Sen. Ralph Hise, R-Mitchell, issued a statement saying the 24-17 party-line split on the new congressional maps resulted from Republicans’ refusal “to pre-determine the partisan outcome of the districts.” Some Democrats had advocated proposals that would draw six or seven districts in Democrats’ favor, according to Hise’s statement. Such an outcome would have amounted to an extreme partisan gerrymander favoring Democrats, based on evidence presented at trial from Jonathan Mattingly. He’s a Duke University professor who presented evidence on behalf of Democrats challenging the old map. 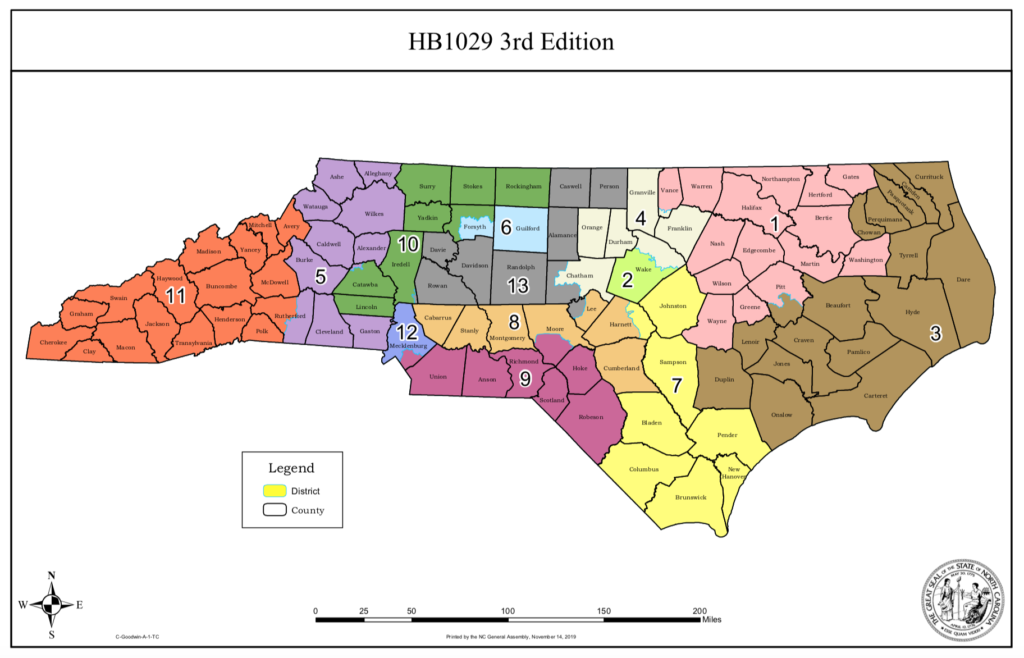 The legislature redrew the maps after a three-judge Superior Court panel in Harper v. Lewis suggested plaintiffs might win a challenge to the congressional districts drawn in 2016. With candidate filing set to begin early next month, the court hinted that a new set of maps, drawn under a more transparent and less partisan process, could withstand the court’s scrutiny.

Hise’s map is already being labeled an “extreme partisan gerrymander” by the National Redistricting Foundation, founded by Eric Holder, U.S. attorney general under President Barack Obama. Holder’s group has called on the Superior Court panel to expedite the schedule for reviewing the new map.

The new congressional map splits only 18 voter-tabulation districts (precincts), a relatively low number compared with other map proposals, Hise said in a morning meeting of the Senate Redistricting Committee. (Rep. David Lewis, R-Harnett, the House committee’s chairman, said Thursday the map split 19 VTDs.) The VTD splits were necessary to ensure equal populations, Hise said. The map also avoids double-bunking incumbents, ensuring none have to run against each other in 2020.

The congressional map is likely to produce eight Republican and five Democratic districts, according to a study of election data from 2012 and 2016 posted to Twitter by Stephen Wolf, an analyst for the liberal Daily Kos website. The current U.S. House delegation consists of 10 Republicans and three Democrats.

“I don’t think anyone can look at this map and say we’ll get the same results as the last election,” said Senate Majority Leader Harry Brown, R-Onslow.

Senate Minority Leader Dan Blue, D-Wake, offered an amendment on the Senate floor that would have shifted some Wake County residents from the 2nd District back to the 4th District, where they’re represented by longtime Democratic Rep. David Price. Blue assured colleagues it was not for any partisan reasons but to accommodate Price.

Hise responded that it would be unfair to make an adjustment like this for Price’s district and not any of the others.

The Senate rejected the amendment, as it did a separate one by Sen. Floyd McKissick, D-Durham.

Blue also called for a nonpartisan redistricting commission and for members to begin preparing for the next redistricting session after new census data arrive in 2021.

As the Senate was debating the congressional maps, the N.C. Supreme Court rejected a request by plaintiffs in the Common Cause v. Lewis lawsuit to review new legislative districts, which were enacted in September. Writing for the court, Justice Robin Hudson dismissed the request.

After passing the new congressional maps, the Senate passed the adjournment resolution enacted Thursday by the House. The General Assembly will return Jan. 14.