Senate votes to ban abortions based on race, gender, or Down syndrome

Jaden Ng, 13, and her family sat in the gallery on Thursday morning to watch the N.C. Senate vote to ban abortions sought based on the likelihood of Down syndrome, the condition Jaden has had her entire life.

As a Down syndrome teen, she and her family worked the halls of the N.C. General Assembly in recent weeks, speaking at committee meetings and lobbying lawmakers to support House Bill 453, the Human Life Nondiscrimination Act/No Eugenics. 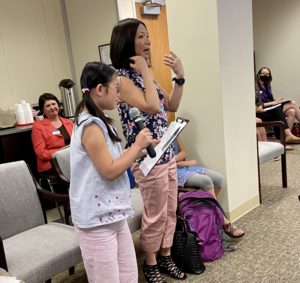 “I know that in my heart that I am God’s child and I love my life,” Jaden told the House Judiciary Committee recently.  She told lawmakers she loves being homeschooled and enjoys swimming.

“I wasn’t really sure if she was up to the task,” said her father, Dr. Wing Ng, of Jaden’s testimony. “But Jaden was writing things down, and when we saw what she wrote we thought she should speak.”

The Ng’s, of Raleigh, were recognized from the Senate floor Thursday by bill sponsor Sen. Joyce Krawiec, R-Forsyth, before the Senate voted 27-20 to send House Bill 453 to Gov. Roy Cooper’s desk. Republicans unanimously supported the bill, and all Democrats present voted against it. During Senate floor discussion, only female senators spoke for one side of the bill or the other.

“People are protected from discrimination in education, in the workplace, in housing, and yet babies with these same characteristics can be aborted simply because of their race or disability,” said Krawiec on the Senate floor. “This is eugenics in its worst form, and this bill will eliminate that atrocity.”

The bill expands an existing law that requires abortion doctors to sign off that the woman is not seeking an abortion based on the baby’s gender, broadening the law to include banning motives of race or Down syndrome as reasons for the procedure.

However, the anti-discrimination element to the bill did not seem to draw Democrats to support it.

“To label a person’s decision to obtain an abortion as ‘eugenics,’ as this bill does, is offensive, irresponsible, and warps the painful legacy of the eugenics movement in North Carolina and disrespects the trauma endured by real victims of forced sterilization,” Sen. Natalie Murdock, D-Durham, said in opposition to the bill.

Sen. Sarah Crawford, D-Franklin, spoke against the bill and said the legislative focus should instead be on providing services to families with disabled children.

“If we want to get serious about walking with women through their journey of a prenatal diagnosis, the prescription is not to tell a woman what she can and cannot do with her body,” said Crawford. “The prescription is funding for services, information for families, and comfort for families in knowing that their child will have access to education, therapies and the medical support they need.”

“There are, as we all know, 15,000 people in North Carolina that qualify for services like these, but they sit waiting for years,” she continued.

Kraweic responded to Crawford directly on the floor, challenging her to help them get such funding for services passed in the state budget after they were lost in Cooper’s budget veto last year.

“We do have 15,000 people on a waitlist and I want to let you know that last session we had a budget dealing with that,” said Kraweic. “It was vetoed by the governor, and as I recall, we didn’t get support from the other side of the aisle. … We have put them in the budget again this year and, Senator Crawford, I hope I can count on your support to make sure those waivers go into effect so we can reduce that waitlist for these children and for other children.”

After the passage of H.B. 453, Lt. Gov. Mark Robinson, who is outspoken about his pro-life beliefs, ordered the bill enrolled and to be sent to the governor.

“The North Carolina Values Coalition calls on Governor Cooper to sign this bill to end discrimination based on race and stigma associated with prenatal screening tests that detect a diagnosis of Down syndrome,” said Julie Scott Emmons, N.C. Values Coalition Vice President. “Children in North Carolina should not have to pass a genetic test to earn the right to be born.”

Cooper must sign or veto the bill within 10 days, or it becomes law without his signature. The Ngs said they will try to share their story with Cooper.

“Most importantly, we would like for him to see what life is like for her and for us, and we hope we can make an impact,” said Wing Ng.

Senate advances bills that would give more freedom to pharmacists, PAs

Do as we say: Cooper passing out cash prizes in return for vaccine compliance