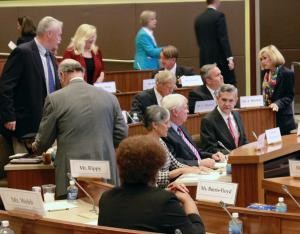 UNC Board of Governors Chairman John Fennebresque and Margaret Spellings, the top candidate to become UNC system president, left a recent “emergency” meeting of the board to meet with Gov. Pat McCrory, a source at the meeting told Carolina Journal. Fennebresque and Spellings were in a closed session with members of the board’s selection committee when they left to meet with McCrory, several board members confirmed to CJ’s source.

Legislative leaders and some members of the Board of Governors have been at odds with McCrory’s involvement in the process of replacing outgoing UNC system president Tom Ross, with House Rules Committee Chairman Rep. David Lewis, R-Harnett, suggesting the governor was interfering with the separation of powers between the executive and legislative branches of state government. All board members are appointed by the legislature, and the governor has no formal role in the board’s operations.

The General Assembly passed a law at the end of the legislative session requiring more transparency during the process of hiring a UNC system president. The law, Senate Bill 670, requires at least three candidates to be considered formally for any opening and requires the involvement of all board members in the hiring process.

Fennebresque’s call for the emergency meeting, two weeks before the board’s regularly scheduled Oct. 30 meeting, led several board members to call on the chairman to resign.

Controversy has surrounded the presidential selection process since the January firing of Ross, a Democrat who succeeded Erskine Bowles in 2010. McCrory has until Oct. 30 to sign S.B. 670, veto it, or let it become law without signing it. The governor not only has refused to sign the bill, he also has voiced opposition to it.

McCrory spokesman Josh Ellis told The Associated Press in an Oct. 16 interview that the law would prevent the Board of Governors from “determining the process of selecting the best qualified candidates,” and board members, who are appointed by House and Senate leaders, “should have the autonomy to do the job for which they are appointed.”

Ellis also stated that McCrory will wait until Oct. 30 to sign the bill or veto it, possibly after the BOG’s regular meeting.

Spellings, a U.S. secretary of education in the George W. Bush administration, was reported on Friday to be the leading candidate to succeed Ross, who is remaining president until his replacement is chosen or the end of the year, whichever comes first.

Late Monday morning, McCrory spokesman Rick Martinez instructed CJ to contact press secretary Graham Wilson, who said he would speak with the governor about the reported meeting with Fennebresque and Spellings. Wilson did not respond to messages left late Monday.

UNC system spokeswoman Joni Worthington responded by email late Monday night to say she could not provide any information about the board’s closed session meeting.

Members of the General Assembly, whose leaders issued a letter to the Board of Governors last week cautioning them against an attempt to circumvent S.B. 670, say they are concerned about blurring lines of accountability in dealings between the legislative and executive branches of government and the UNC system.

“Great deal of respect to the governor, but I’m not sure what role the governor has, if any, in appointing to the Board of Governors,” Lewis, chairman of the House Rules Committee and a member of the House Standing Committee for Education-Universities, told CJ. “I think the governor himself has made clear that there is a dividing line between legislative and executive responsibilities. I am merely pointing out that the appointment of the Board of Governors is a legislative responsibility.”