Price and Holding double-bunked in 4th District; Adams no longer lives in 12th

Gov. Pat McCrory on Wednesday issued a proclamation convening a special session of the General Assembly at 10 a.m. Thursday to address a federal court ruling that halted North Carolina’s congressional primary. State Rep. David Lewis, R-Harnett, said plans are moving forward to use new maps and to set a new date for the primary. 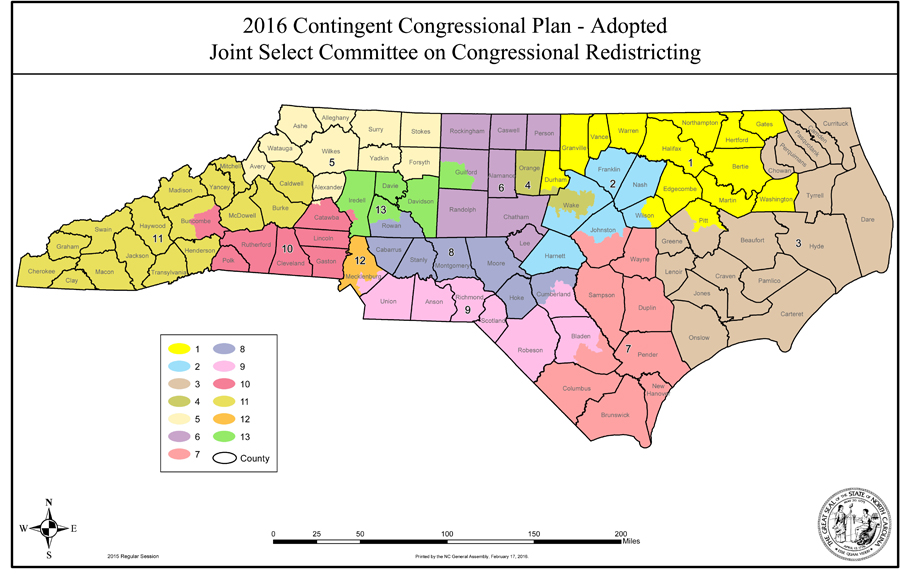 Although they no longer will reside in their districts, Adams and Holding still can run for election there, or in any other district. North Carolina does not have a requirement that a candidate must reside in the district where they seek office.

In issuing his call for Thursday’s special session, McCrory said he was “extremely disappointed by the recent ruling” of the three-judge panel in the U.S. Middle District of North Carolina saying the state’s 1st and 12th congressional districts were drawn using race as the predominant factor in violation of the Equal Protection Clause of the 14th Amendment.

The judges ordered the state to submit a new congressional map by Friday, and to delay any congressional primary until a new plan is approved. The state appealed the decision to the U.S. Supreme Court.

McCrory said he is hopeful that Chief Justice John Roberts “will issue a stay that is in the best interest of the people of North Carolina. I am concerned that in the absence of a stay, the voting for congressional representatives could be disrupted.”

“All of these districts are drawn with either 733,499 persons, or 733,498 total persons. This is as equal as practical, and in accordance with federal law,” Lewis said.

The areas in every congressional district comprise contiguous territory, and only specific election results were used in building the new district configurations, he said. Race was not used as a factor in the remapping.

“We believe this map will produce an opportunity to elect 10 Republican members to Congress, and make no mistake, this is a weaker map than the enacted plan in that respect,” Lewis said.

The snake-shaped 12th district, which has been the subject of legal challenges, was collapsed to its highest population center, and the map “does away with the serpentine district that dates back to 1992,” Lewis said.

Adams, of Greensboro, no longer would reside within the new district’s boundaries.

“Only two incumbents are double-bunked in this map, one Republican, and one Democrat,” Lewis said in reference to Holding and Price. “Eleven [representatives] were placed in a district by themselves.”

As a goal of making the districts more compact instead of oddly shaped, “Only 13 counties and 13 [precincts] were split in this map,” Lewis said. “In accordance with the criteria, more whole counties and more whole precincts … are the best indicator of compactness we believe we are able to achieve.”

Despite the changes, Democratic members of the Legislative Black Caucus expressed rancor over Republicans’ omission of race as a criteria for drawing the districts, and that led to some stinging exchanges.

Republicans said they hoped not using race would avoid another setback from the federal court that found the legislature unconstitutionally used race to pack some districts with blacks while diluting black voting strength in others.

“Historically the courts have said that they’re going to stay out of the political thicket when it comes to gerrymandering based on partisanship. But I will tell you this is such a bold and audacious move that it’s probably what the courts have been waiting for to wade into this area,” Blue said.

“You again managed to stuff about half of the black population in the state” into three districts, Blue said, and did that by extracting blacks mostly from the urban areas in Wake, Durham, and Mecklenburg counties.

“You can’t use partisanship as a proxy for race, and that’s exactly what you’ve done here,” Blue said, calling it “pernicious,” and a “dismantling of democracy.”

“Sen. Blue appears to try to want to create something that does not exist,” Lewis said before moving on with questions.

Several Republicans reminded Democrats that several times federal courts said districts drawn by Democrats violated the Constitution, referring to a series of large maps posted on the meeting room walls that showed past districts that passed judicial muster were similar to the districts enacted in 2011 enacted.

“I find it very ironic” that the current lawsuit that has thrown confusion on this congressional primary resulted from Republicans drawing districts mostly based on past maps the Democrats used, said Rep. Mike Hager, R-Rutherford.

“We still need to have race mentioned in here because of Section 2 of the Voting Rights Act,” said Rep. Mickey Michaux, D-Durham. “I’m not going to vote for another unconstitutional map.”

Sen. Floyd McKissick, D-Durham, said he was concerned about the racial composition and party registration of the newly drawn districts, and said Democrats had scant time to draw a map of their own.

Blue made the same complaint, and said “you didn’t draw them overnight either,” hinting that because the maps didn’t come from a legislative computer, they already were in place elsewhere.

“We’re all under a very tight time schedule” due to the federal court ruling, said Sen. Bob Rucho, R-Mecklenburg, Senate co-chairman of the select committee. “This is a heroic effort” to accomplish what the Democrats did in a short period of time.

“The minority party had the same amount of time to bring maps forward,” but chose not to, even though two weeks ago Democrats knew that the court had ordered new maps, Hager said.

Polls should be scaring Democrats

No time: A common theme emerges at public hearing on redistricting