State To Continue Fight Against Alcoa 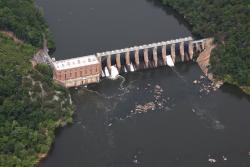 RALEIGH — Even though Alcoa Power Generating Inc. has won two more legal battles against the state of North Carolina dealing with the company’s efforts to relicense its four hydroelectric dams on the Yadkin River, the state plans to continue fighting to gain control of those facilities, says a spokesman for one of the agencies involved in the legal battle.

The state Department of Administration, which lost a lawsuit in U.S. District Court over ownership of the 45-mile riverbed beneath the lakes created by the dams, indicates it may appeal the Sept. 28 decision by Judge Terrence Boyle dismissing the case. Meantime, the N.C. Department of Environmental Quality, which lost a Sept. 25 ruling in state Superior Court saying that the state unlawfully had denied a water quality certificate to operate its dams, has not decided if it will pursue further legal action.

Alcoa has operated the dams since 1917 and its federal license expired in 2008. The company is operating the dams under a temporary license. It began the relicensing process in 2002, but in 2008 state officials began throwing obstacles in Alcoa’s way. Democratic Govs. Mike Easley and Bev Perdue and Republican Gov. Pat McCrory each have opposed the relicensing. They wanted the state to take over the dams and operate the hydroelectric facilities. (See earlier Carolina Journal news reports here.)

After clearing several hurdles, in Sept. 2012 Alcoa submitted an application for a water quality certification to the North Carolina Department of Environment and Natural Resources, which recently was renamed the Department of Environmental Quality. The certification is required under the Clean Water Act before the Federal Energy Regulatory Commission can renew a license to operate the dams. DENR was prepared to issue the license in July 2013 until a last-minute intervention by the North Carolina Department of Administration caused a problem. DOA claimed that the riverbed belonged to the state rather than Alcoa.

Alcoa filed a complaint against DENR with in the Office of Administrative Hearings. Administrative Law Judge Selina Brooks ruled in May 2015 that DENR was wrong to deny Alcoa’s water quality certificate based on the state’s new claim to ownership. She ordered DENR to reconsider the application.

DENR appealed the Brooks ruling to the state Superior Court, where Judge Bryan Collins affirmed her ruling and directed DENR to proceed with processing Alcoa’s application.

DEQ is not ready to give up yet. “We are reviewing the judge’s order and determining next steps. A decision has not been made on whether or not to appeal,” DEQ spokeswoman Crystal Feldman told CJ.

DOA initiated a separate legal action in August 2013 over ownership of the riverbed in N.C. Superior Court. The following month, Alcoa successfully had the case moved to federal court.

Boyle ruled in May that the state failed to prove the Yadkin River was navigable for commerce in 1789, a fact the state believed would help it claim ownership of the “Relevant Segment” of the riverbed.

On Sept. 28, Boyle ruled on the remaining issues in federal court.

“It is impossible not to notice the timing of this lawsuit. The state did not file suit immediately upon learning that Alcoa claimed ownership of the property. Instead, it waited over seven years, until after Alcoa closed the Baden Works aluminum smelting plant, to file suit. … The evidence, even viewed in the light most favorable to the state, overwhelmingly demonstrates that Alcoa has title to the bed of the Relevant Segment,” Boyle concluded.

“Alcoa is pleased with the court’s ruling affirming our ownership of the Yadkin River property,” said Barham. “With this ruling we encourage the state of North Carolina to quickly issue the 401 water quality certificate so we can begin making investments in water quality improvements and bringing other significant benefits to the region once a new federal license is issued.”

“We are disappointed and disagree with the court’s decision. We believe that these waters are vital to the state of North Carolina and we are going to pursue all available remedies,” DOA spokesman Chris Mears told CJ.