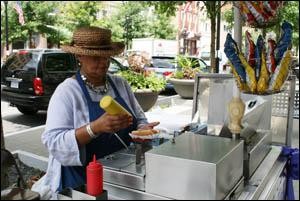 As times get tougher for brick-and-mortar restaurants, mobile food vendors are taking center stage in several large cities around the country.

Food carts and food trucks have pushed through the recession in Portland and San Francisco, and this summer they’re making their way South — to Nashville, Atlanta, and Miami — as entrepreneurs struggle to create their own jobs.

The Food Network cable channel also has taken note, with a series “The Great Food Truck Race,” featuring mobile chefs from around the country competing in a continentwide challenge on wheels. Viewers recently voted for the 10 trucks to compete in the show’s second season. While the winners will be announced Sept. 19, of more than 270 entries, Durham’s Only Burger appears to have finished first or second in the balloting.

But the “street food” scene hasn’t arrived in a big way in Raleigh, where city council members fear it would hurt local restaurants and just wouldn’t “look right.”

Other than a couple of snow cone carts and coolers full of prepackaged ice cream, only a handful of hot dog stands dot the sparsely populated streets of downtown Raleigh.

Behind the streetscape is a series of rules and regulations.

A Department of Environment and Natural Resources rule adopted in 1980 dictates, “Only hot dogs shall be prepared, handled, or served from a pushcart.”

Other than hot dogs, only prepackaged food from approved restaurants may be sold.

State law allows a greater variety of food to be prepared and sold from food trucks, but trucks are more expensive and more heavily regulated than food carts.

But even if a businessman could afford the extra cost of a truck, he wouldn’t be welcome in Raleigh.

While some cities allow them to park in metered spaces or designate a lot for them downtown, food trucks in Raleigh can operate only on commercially zoned land, with a permit, for up to 20 days.

A limited number — two per block — of non-motorized pushcarts are permitted to set up on city sidewalks, but they cannot locate near a restaurant selling similar food, and they must be of a certain dimension, weight, and material.

When asked why the city restricts the number and location of mobile food units, Raleigh City Councilwoman Mary-Ann Baldwin said it was necessary to protect established restaurants from competition and to keep the streets looking neat and tidy.

“You want to balance what’s good for the entrepreneur with what’s good for your restaurant owners,” Baldwin said. “You don’t want to hurt them and put them out of business. They’ve made a huge investment.”

The way the ordinance is written now, Baldwin said, “people can go into sports bar, drink a couple of beers, go outside and get a hot dog and then come back in, instead of buying bar food.”

“You can imagine if you were a restaurant owner who was paying a lot more in taxes and you have a hot dog vendor outside your door, you’re not going to be happy about that,” she said.

The second reason for limiting the number of mobile vendors in downtown Raleigh is purely aesthetic, said Baldwin.

“We want things to look good,” she said. “We don’t want people driving out on — as Thomas Crowder put it in our meeting — beat-up golf carts selling t-shirts.”

Crowder is one of two architects on city council who Baldwin said “take a lot of interest in design and aesthetics.”

Removing the cap on pushcarts would allow them to pile “on top of each other,” Baldwin said.

“It could limit connectivity [make it difficult for people to walk or ride their bikes],” she said.

Michael Sanera, director of research and local government studies at the John Locke Foundation, has a different vision for downtown Raleigh.

He pointed to an iconic 100-year-old photograph of farmers, merchants, and grocers selling their wares from shoddy carts and wagons in the streets of Manhattan.

“It’s the most beautiful picture I’ve ever seen,” Sanera said. “It shows hundreds of people making a living with very little capital investment and satisfying customers who are willingly buying their products.”

“In my humble opinion, that’s the way Fayetteville Street should look like,” he said.

He said if Raleigh wants to promote business in a down economy, it must leave entrepreneurs alone, no matter how ugly or crowded their carts.