Student fees, other costs, pile up on bargain tuition at UNC schools

In North Carolina, the golden ticket for resident college hopefuls is $1,000 yearly tuition at a handful of public universities. But while the offer looks shiny, the final receipt may stun new students.

The General Assembly in 2016 made major tuition cuts at three University of North Carolina System campuses. The program, NC Promise, charges resident students just $500 per semester tuition at Elizabeth City State University, UNC Pembroke, and Western Carolina University. Out-of-state students get a break, too, with tuition locked in at $2,500 each semester.

The program is lauded as a major success, granting more college access to rural and low-income students. When NC Promise kicked-off in August 2018, enrollment jumped 20% at ECSU and UNCP. WCU got a 10% enrollment bump. That growth continued into 2019.

As the headcount ticks up, many applaud the state legislature and the UNC System for boosting college affordability.

But other costs, including mandatory student fees, room, board, books, and supplies, rack up an eye-popping total cost of attendance. New estimates show NC Promise schools will average $16,628 annually during the 2020-21 school year.

With those costs far exceeding the price of actual time in the classroom, North Carolina’s promise might be tough to keep.

The heightened costs of higher education

“Higher education as ‘free as practicable’ is something that we all take very seriously, and it’s something our legislature has always taken very seriously,” UNC Board of Governors Chairman Randy Ramsey told Carolina Journal in an exclusive interview Feb. 19.

In North Carolina, affordable higher education is a constitutional right for residents, and several cost regulations are in play. In addition to passing NC Promise in 2016, the General Assembly capped student fee increases at 3%, and enacted fixed tuition for resident students who complete their degree in four years.

Still, prices are on the rise, albeit by a relatively small amount. This year, UNC is considering proposals to raise tuition an average of 2.7% for new resident undergraduates. Mandatory student fees are set to go up by an average 2.4%.

It’s those fees, especially, that deserve scrutiny, some experts say.

Student fees, while separate from tuition, are charges that cover things such as new buildings, health services, campus security, and athletics. In the case of NC Promise schools, fees are more than double the $1,000 yearly resident tuition bill. At WCU, fees are $2,825. At UNCP and ECSU fees total $2,489 and $2,589, respectively. 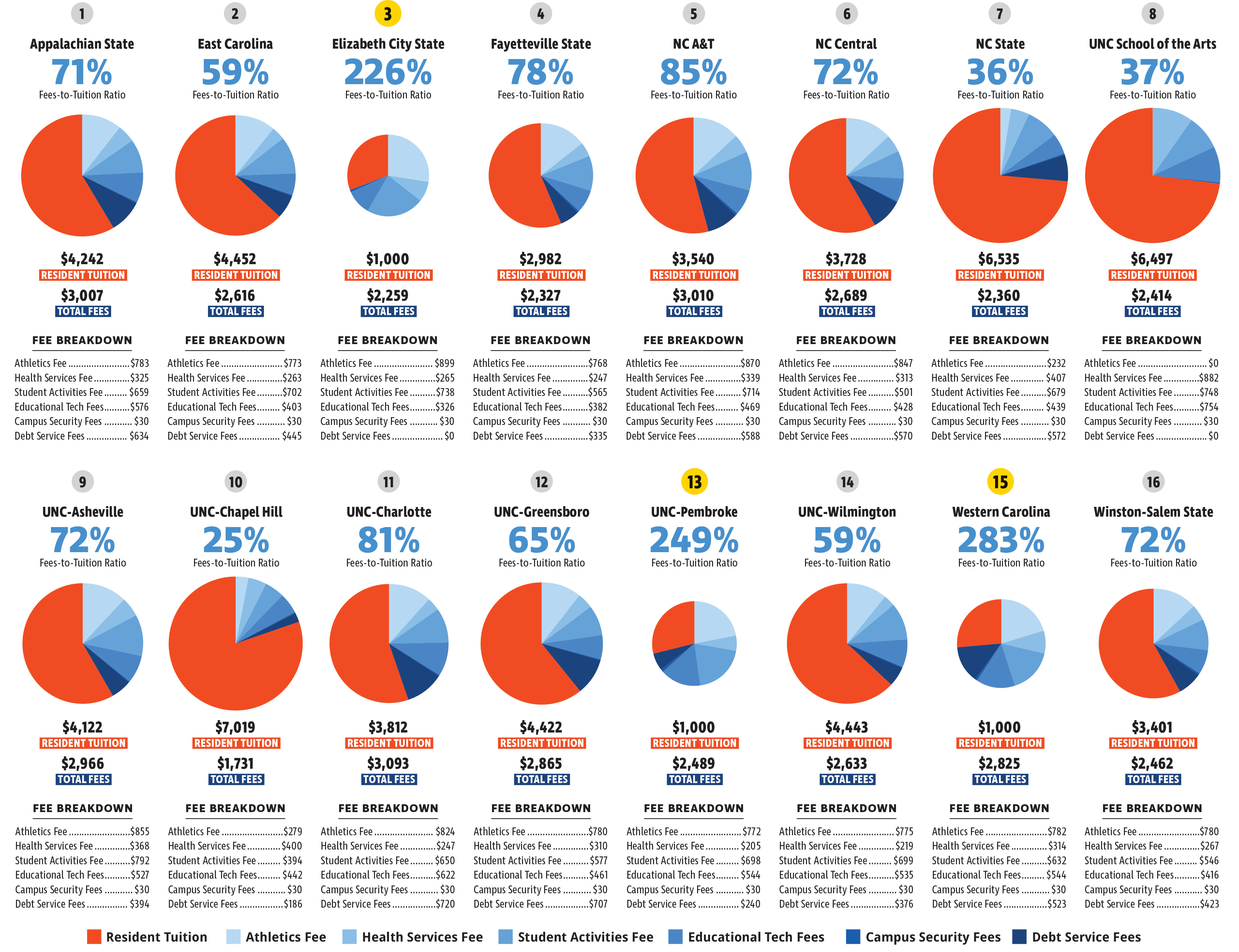 Of the multiple fees billed to students, athletics and debt–service fees are the most egregious, said Joe Coletti, senior fellow for fiscal and tax policy at the John Locke Foundation.

The highest athletics fee in the UNC System is charged by ECSU, a school that’s not in the esteemed and profitable Atlantic Coast Conference. At $899, the athletics fee alone is nearly equal to the school’s $1,000 per year resident tuition.

The average athletics fee for all UNC schools not in the ACC is $808, Coletti said.

“In other words, the schools that attract smaller crowds for their sports turn around and take the money from students, whether those students care about sports or not,” Coletti said. “All this while N.C. State University and UNC Chapel Hill consider whether to pay their athletes and subsidize non-revenue sports with earnings from basketball and football.”

Debt–service fees — charged to students to pay for construction projects approved by the General Assembly but not funded in the state budget — also present a sizable cost, Coletti said.

For example, UNCC bills students for $720, the highest annual debt–service fee in the system. UNC Greensboro sits in the second spot with a yearly debt fee of $707. Appalachian State University is third, charging its students $634 annually. Only two UNC schools, ECSU and UNC School of the Arts, don’t have a fee for debt-service.

These fees are more costly than voter-approved general obligation bonds, Coletti said. They’re also unfair, he said, since students are paying for buildings they won’t be around to use.

On the flipside, current students benefit from buildings paid for by previous students, say supporters of debt-service fees.

That’s a terrible idea, said Jenna Robinson, director of the Martin Center for Academic Renewal. The cap on fees has done a lot of good, she says. Removing it encourages universities to shove costs into the fee category because “it gets less attention than tuition.”

“Everybody’s watching the tuition number, and it’s like the Wizard of Oz behind the curtain,” Robinson said. “[Campuses] are raising fees, and nobody’s paying attention.”

When a student enrolls at a university, they aren’t expecting a slew of charges separate from tuition, said Richard Vedder, an Ohio University economics professor and author of the book Going Broke by Degrees.

“Why aren’t these [fees] included in the general, basic tuition fee that the schools have? Well, I think the answer is that the schools are trying to create the image that they’re cheaper than they really are,” Vedder told CJ.

In-state tuition — significantly lower than tuition charged to non-residents — is off-set by appropriations in the state budget. Mandatory student fee charges are the same for both in-state and out-of-state students, however. Room and board, too, is billed at the same rate to residents and non-residents alike.

By charging fees, universities have more flexibility in covering costs — like new buildings, health care, activities, or athletics, Ramsey said.  Still, those charges deserve some careful consideration, the BOG Chairman said. The UNC board, set to vote on new tuition and fee proposals in March, isn’t sitting on its hands.

“I am concerned that people don’t understand how much those fees are,” he said. “The real number that’s important, I think, is not what the tuition is, not what the fee is, but total cost of attendance.”

Total estimated cost of attendance at UNC schools in 2020-21 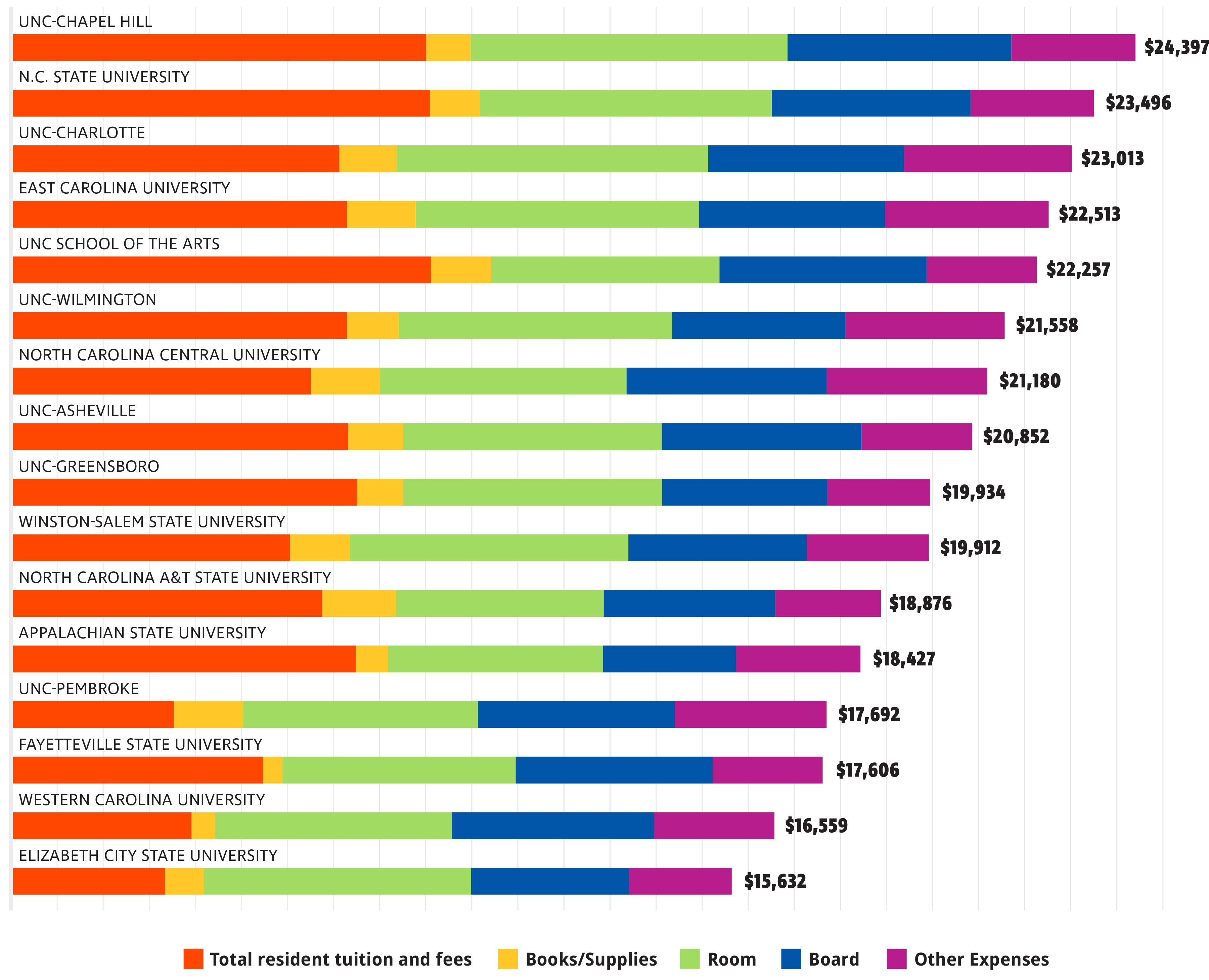 During a three-hour tuition and fee workshop Feb. 19, UNC board members hashed out several ideas on controlling costs.

While student fees are capped, other expenses aren’t, said BOG Vice Chairwoman Wendy Murphy. The average proposed cost of room and board for the 2020-21 school year is $5,621 and $4,054, respectively. Combine those tickets with the average cost of books, supplies, and other expenses, and the total is $13,582.

Not every UNC student will live on campus, but those numbers are worrisome, Murphy told the board.

Multiple board members are driving for answers, Ramsey said, asking whether universities are providing essential services, or if some of those services are unnecessary.

“Is it important enough to spend that money on?” Ramsey asked. “Many of our board members, including me, are not sure of that.”

The board is constantly told amenities attract students, Ramsey said.

“Maybe they’re right. But our board is not going to sit idly by and take that answer. Our board is very focused on, ‘Tell me exactly why this is.’

One such board member is Steve Long, a Raleigh tax lawyer who many times has said he’s “fee’d up” with rising costs at UNC schools.

In 2015, Long called out administrators at UNC Chapel Hill for devoting part of a $436 health fee to hire “sexperts” and employees working on social diversity projects. The money paid for stage skits about racism, homophobia, and sexual assault, Fox News reported.

Those fees were supposed to cover health needs, not social advocacy, Long said.

Fee hikes are out of control, Long said, pointing to the BOG’s official policy, which says across-the-board increases should happen just once every other year. The board isn’t abiding by that rule, he said.

“We’ve now adopted this pattern where every year [campuses] come in with another bite at the apple,” Long told CJ.

Slowing the machine will take a lot of work, he said, but the board should start by studying how campuses finance new buildings. The BOG needs to understand whether construction projects are truly worth the costs to students, he said.

“There is a little Roman emperor in every university administrator who wants to build new buildings,” Long said. “And quite frankly, I suffer from the same condition. I like nice new buildings. But you know, there has to be a limit.”

The board should pressure UNC’s president and administrative staff to control fees and should set better parameters for how those fees are used, Long said.

Another suggestion, brought by BOG member and Greensboro real estate developer Marty Kotis, is the board ditching one-size-fits-all fees that load students with potentially unwanted services.

“If you want to build a rock–climbing wall, great,” Kotis said. “You know, do it like the free market would, and charge for use of the rock–climbing wall. But instead, we have the socialist approach. Everybody pays for it, and then some people use it.”

Simply put, the best way to cut costs is to stop spending, he said.

“I think that at this point it’s time to really be putting on the brakes in every category so that the number at the bottom of the bill isn’t going up every year,” Robinson said.

The point is well made, Ramsey said, but a “silver bullet” answer may not exist. Small campuses like ECSU and FSU need money to demolish condemned buildings. The entire system faces a backlog of more than $1.5 billion in maintenance needs, he said.

North Carolina’s failure to enact a new state budget — which would’ve included $130 million for some of those projects — presents a challenge, too. Ultimately, the board must find a way to balance the costs of higher education against capital needs, he told CJ.

The UNC board is committed to keeping its promises about affordability, Ramsey said. For now, that means asking the right questions about student fees, and any other burdensome costs.

“We need to address that today,” Ramsey said. “Because just continuing to raise fees, or raise tuition, or build new buildings without an end plan, is just not very good governance.”