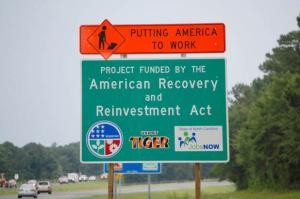 The U.S. House of Representatives last week defeated a measure that would have prevented additional funding from the American Recovery and Reinvestment Act to pay for highway signs touting projects the so-called stimulus act has underwritten.

H.R. 5679, by Rep. Aaron Schock, R-Ill., stated: “None of the funds appropriated or otherwise made available under the American Recovery and Reinvestment Act of 2009 (Public Law 111-5; 123 Stat. 115 et seq.) may be used for physical signage indicating that a project is funded by such Act.”

In a report aired last week, ABC News attributed at least $5 million in spending to date on the signs. Schock says the cost is closer to $20 million, and if it continued unchecked, signs would cost nearly $200 million when funding from the stimulus law has been exhausted.

Individual states have the flexibility to make the signs fancy or plain, with proportionate price tags. As ABC noted, one sign near Washington-Dulles International Airport set back taxpayers $10,000. In Tennessee, by contrast, state officials authorized bare-bones signs averaging less than $40 apiece. The story also reported that “the state of Illinois has spent $650,000 on about 950 signs and Pennsylvania has spent $157,000 on 70 signs. Other states, like Virginia, Vermont, and Arizona do not sanction any signs.”

In North Carolina, the office of 5th District GOP Rep. Virginia Foxx has estimated that most of the signs in the Tar Heel State run $2,500. Foxx led the Republican debate on the bill when it was brought to the House floor July 14 as an amendment to H.R. 1722, a measure expanding telecommuting options for federal workers.

During the floor debate, Republicans portrayed the signage as propaganda, while Democrats claimed the spending on signage was trivial and noted that Republicans had no qualms about celebrating the projects the stimulus law supported when they were in their home districts. (Foxx countered that “I wasn’t one of those people who went home to take credit for the Stimulus Act.”)

The amendment to stop spending on the signs failed in a procedural vote, 232-184, with 173 Republicans and 11 Democrats opposing continued spending. No Republicans supported further stimulus funding for signage.

Foxx’s Democratic opponent for the 5th District seat in the fall election, Billy Kennedy, told the Statesville Record & Landmark he supports the stimulus plan and the signs. “I believe all Americans want to know where their tax dollars are being spent,” Kennedy said. “I’m glad we’re creating jobs and maintaining our infrastructure.”

The thorny issue of slavery reparations