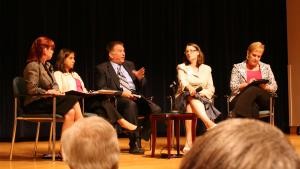 RALEIGH — A new law will give thousands of parents of disabled children a tax credit of up to $6,000 for taking their children out of the public school system and educating them privately. However, the credit is not available to parents who made the switch before the fall of this year.

Several hundred parents gathered in the North Carolina Museum of Natural Sciences Aug. 16 for a question and answer session about the new tax credit. Dozens were disappointed to find out they weren’t eligible.

To qualify, the disabled child must have been enrolled for at least the preceding two semesters in a public school, explained bill sponsor Rep. Paul “Skip” Stam, R-Wake.

“Not every parent of a child with special needs can get this credit this year, and I am very sorry for that,” Stam said. “Only those who have been in public school for the last two semesters. It’s a terrible limitation. I’m totally against it, but it was completely necessary because we had no money.”

With the two-semester limitation, the bill actually saves the state money, Stam explained. That’s because the state spends more educating a child with special needs than it loses by providing the tax credit. If the state offered parents money for doing what they’ve already been doing — educating their children on their own dime — it would lose millions of dollars.

Parents complained it wasn’t fair that they had to both pay taxes for public education they weren’t using while paying tuition for private education. Many said they had no choice but to take their children out public schools that were unable to understand their children’s disabilities.

“At age 5, Brandon was placed in a regular classroom, against our will, where no one was able to communicate with him … much less know how to educate him,” said one parent whose son couldn’t speak except by using sign language or an augmentative communication device.

Another parent said her son was in public school for two “disastrous” years before she decided to put him in private school, where he now “thrives.”

“Do I have to punish him by putting him back in a horrible public school for a year?” she asked. If she doesn’t, she said, she may lose her house.

“We have stopped our 401(K), we have sold cars, we’ve gone to [financial adviser] Dave Ramsey workshops, we’ve stopped his college fund, we’ve stopped everything to be able to afford private school,” she said. “We’re thinking about selling our house and moving to an apartment. We will do whatever we have to do because our son is worth it.”

For parents who have been waiting to transfer their children out of public school but financially unable to do so, the bill is a cause for celebration.

“When I received the call in July telling me House Bill 344 had passed, I wept,” said one mother, who had hoped to transfer her speech-impaired son to private school by the time he reached middle school.

“This was a long, hard battle,” she said. “We fought for our son for a long time to get him what he needed.”

Stam said he hopes the two-semester requirement eventually will be removed. He said including it was a necessary compromise to get the bill passed and encouraged parents to urge their representatives to support future legislation removing it.

The tax credit will be available next year for parents who begin paying tuition for special education or related services this fall.