Those businesses are preparing for the worst case scenario after the election. One way or another.

Nov. 3, Election Day, is already contentious, with each political party accusing the other of undermining the integrity of the election. Several states, including North Carolina, are tied up in lawsuits challenging early voting rules, leading to more confusion over what we will know and when.

A hyperpolarized election coupled with ongoing racial justice protests, and a growing fatigue over COVID-19 lockdowns make for a perfect storm of discontent.

They can see the storm clouds brewing on the horizon. The only question is will it be a drizzle or a downpour?

She remembers the riots in May. Daytime protests over the death of George Floyd gave way to rioting and looting once night fell. Her shop is in the Poyner YMCA building. All the windows were broken. Her brand new cash register was stolen, supplies dumped on the floor.

“For some reason, it felt personal,” Waas said.

She knows it could happen again, and soon.

Big cities across the country are preparing for unrest following election night. Police in Portland, Oregon; Chicago, Illinois; and Austin, Texas have plans for how to handle everything from peaceful protests to full-blown riots. 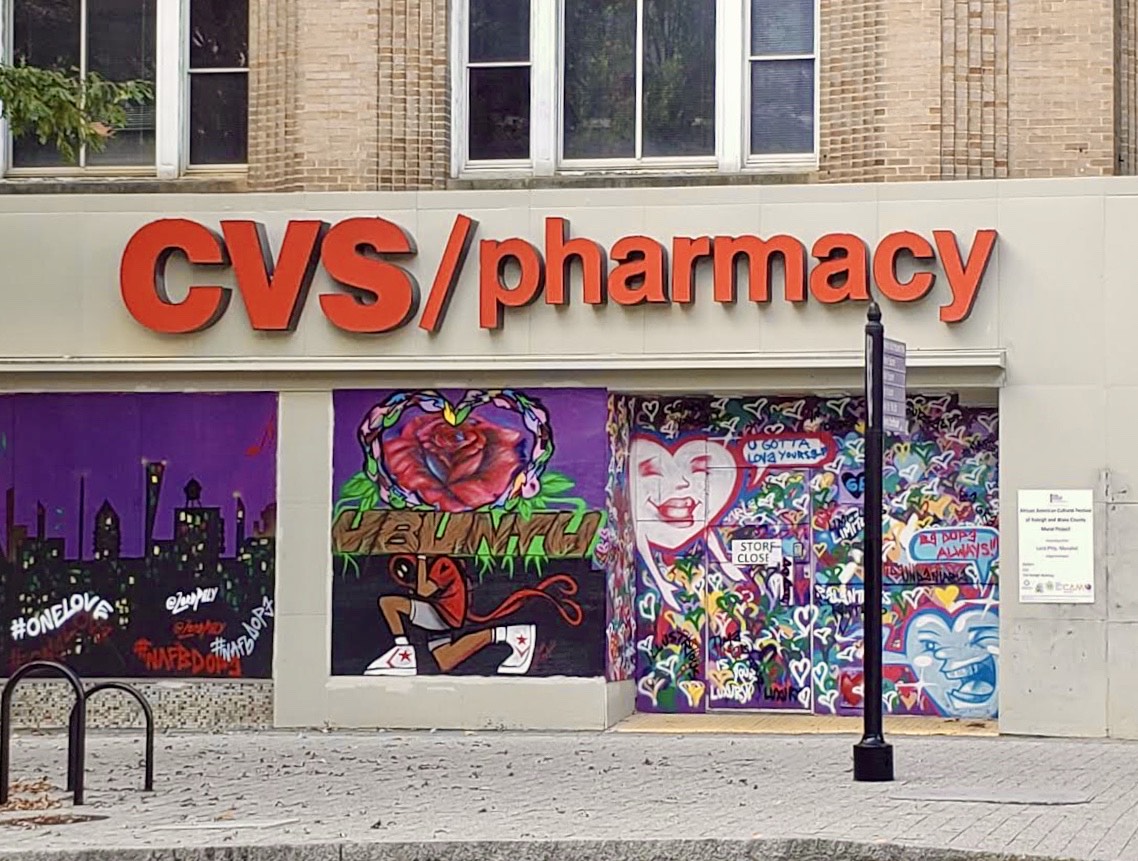 In May, looters targeted the CVS on Fayetteville Street in Raleigh, smashing windows and setting a fire just outside the store. The windows are still boarded up and decorated with a colorful mural. (CJ photo by Lindsay Marchello)

Around 40 cybersecurity guardsmen will assist with IT needs in North Carolina, the Washington Post reported. The Texas Army National Guard plans to send 1,000 members to cities across the state to support local law enforcement in the event of civil unrest following the election.

Whatever plans the Raleigh Police Department have for election night aren’t for public eyes.

Downtown businesses are doing what they can to keep their property safe.

Boarded up windows are a common sight in North Carolina’s capital. Leftovers from the riots in May. Some are decorated with richly colored murals, inscribed with messages of unity, love, and perseverance. Others are left bare, a reminder of the real purpose they serve.

More storefronts will have boarded up windows as the days creep closer to election night.

Businesses are bracing for an ugly night.

Any time protests are planned, the city and Downtown Raleigh Alliance have done a good job of keeping businesses informed, Waas said. But she hasn’t heard from them yet about the plans for election night.

John Pugh, owner of House of Swank, is boarding up his store. He hasn’t heard anything either from the city or Raleigh PD on how to prepare.

“We have been monitoring the elections for weeks and will continue to do so. If at any point we need to make operational changes, we will adjust accordingly,” Julia Milstead, public information officer for the City of Raleigh, told CJ.

Some owners will pack up early on Nov. 3, while others, like Cyrus Glass, plan to stay and protect their store.

Glass is the owner of Rocket Fizz Soda Pop & Candy Shop. The store, located off of Fayetteville Street, is decked out with colorful menagerie of knick knacks, candy, and soda pop in glass bottles.

Glass knows people are going to cause trouble after the election. It doesn’t matter who wins, there’s going to be chaos, he said.

He’s prepared to defend his store, armed with a two-by-four. A couple of nails stick out of the wooden board.

Glass doesn’t have much faith in the Raleigh PD to protect downtown. During the May riots he saw the police, decked out in tactical gear, use tear gas on groups of people just talking.

He saw people using hammers to break windows and steal whatever they could find.

“I have never in my life seen anything like that night,” Glass said.

Maybe this time will be different, but he’s not so sure. 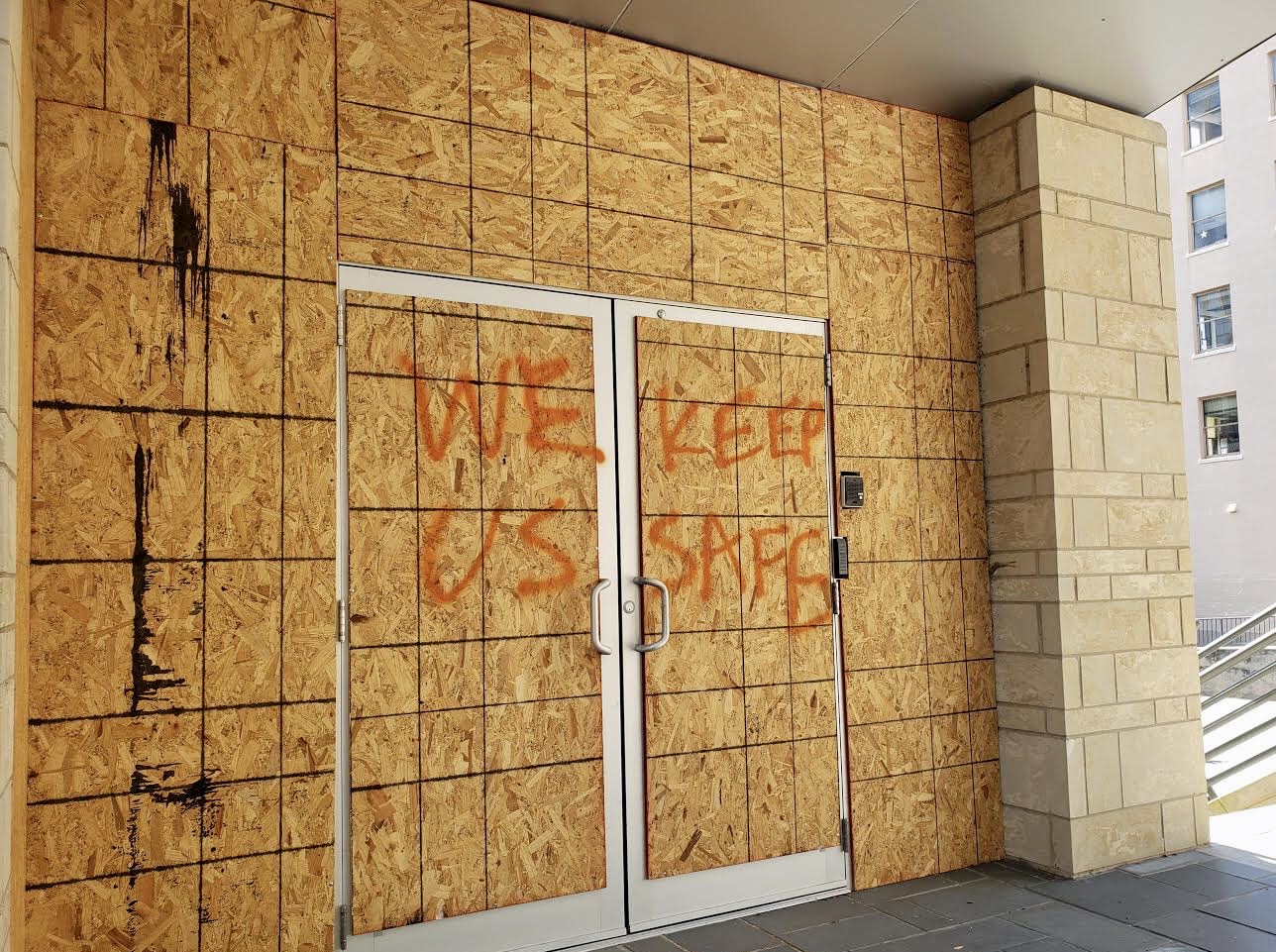 The storefront at 111 West Hargett Street in Raleigh has been boarded up to prevent looting. (CJ photo by Lindsay Marchello)

A review of the Police Department’s response to the May protests and riots found the police used expired tear gas on people. In one instance, they did so unnecessarily.

“We keep us safe,” a spray painted message on a boarded up building on Hargett Street reminds passerbyers. Not that many people are walking around downtown these days.

Business has been slow, Waas said. People are tired.

Tired of COVID-19. Tired of the political divide. Tired of rebuilding, just to watch it all get torn down again.