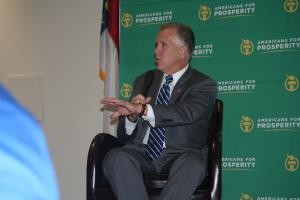 Republican U.S. Sen. Thom Tillis talked Obamacare, energy policy, the federal budget, and the Export-Import Bank during a meeting with Americans for Prosperity activists during a luncheon Monday at the Langtree Plantation in Mooresville.

“I’d rather have a rainy day in North Carolina than a sunny day in D.C.,” Tillis said, noting that he would be returning to the nation’s capital later in the evening for some scheduled Senate floor votes.

Tillis took on President Obama’s “clean energy” plan. He said that in some states, such as West Virginia, the new emission standards from the Environmental Protection Agency would increase residents’ energy bills on average an additional $1,200 annually because 90 percent of the state’s electricity comes from coal.

“For the very people this president is supposedly most focused on, it will put them in a position between determining whether or not they should stay warm or eat,” Tillis said.

“The EPA emission standards are too aggressive, too soon,” Tillis said. “We need to continue to look for other ways to reduce the impact we have on the environment. But this policy is too soon and too burdensome.”

Tillis also criticized the Waters of the United States rule, put forth by the EPA and the U.S. Army Corps of Engineers under the Clean Water Act.

“It will become the single largest land grab the federal government has ever been responsible for,” Tillis said. He said that the rules could allow the EPA to expand regulations over inland waters far beyond what is allowed under state and local regulations. (North Carolina’s environmental secretary Donald Van Der Vaart explained the controversy at the John Locke Foundation’s Shaftesbury Society earlier this year.)

The federal water rules would included added costs, which combined with other regulations could be the “the proverbial straw” that moves the country back into a recession, Tillis said.

He also criticized Obama for not approving the Keystone XL Pipeline.

Tillis cited the recent appropriations bill passed by Congress and signed by Obama as an example of less-than-ideal votes senators often face.

“The problem we have here is that if we wait for perfection, then we really need to understand that you’re not in the right country,” said Tillis, who voted for the spending measure. “Because the Founding Fathers made sure that this process was imperfect. They made absolutely certain that our ambitions have to be set off against [others’] ambitions. If you wait for the perfect, you will almost certainly run this country into the ground. And I have no intention of doing that.”

Tillis compared the process to a chess game and a baseball game. He said you need to move the pieces to get the right end game. “You don’t do that by swinging for the fences,” Tillis said.

He said the bill would balance the budget within 10 years. He said it would take that long to get the federal government’s books to balance because of a number of variables, such as the economy and what’s often referred to as mandatory spending, including entitlement programs and interest on the debt.

He said the nation needs an honest discussion over entitlements, such as Social Security.

“It’s dishonest to say Social Security is OK,” Tillis said. “It’s just not.” He said reformers aren’t talking about ending Social Security for older Americans already retired or nearing retirement age, adding that such a move is not necessary to fix Social Security.

Tillis joked about a woman he talked to during the 2014 campaign for Senate who told him she couldn’t vote for him because he was going to end Social Security.

Referring to the growing U.S. debt, which is expected to reach $20 trillion before the next president is inaugurated, Tillis noted that a baby born today is responsible for $50,000 in government debt, referring to the newborn’s per capita share. If the debt problem is going to be solved, everything has to be on the table, he said.

Tillis also said that the Senate would use what’s called the “reconciliation process” — which allows a simple majority to pass budget legislation in the Senate — to repeal or revise a number of the provisions of Obamacare. “The president is going to veto [reconciliation],” he said. “But at least we can put it on the president’s desk.”