Atlantic Coast Pipeline LLC was formed in 2014. The consortium would build a 600-mile pipeline to bring natural gas from West Virginia to Virginia and North Carolina. The next year, ACP filed an application to the Federal Energy Regulatory Commission; ACP would also need environmental permits in each of the three states and applied for North Carolina permits in 2017.

Gov. Roy Cooper, who took office as governor in 2017, was getting pressure from ACP opponents to stop the pipeline. Documents indicate he didn’t think he could end the project, but he wanted to offset concerns. Cooper staff members searched for a “precedent for a company setting aside funds for community benefit before approval of a major deal or project.”

In December 2017, Cooper representatives convinced ACP to provide the mitigation fund to the state. On Jan. 25, 2018, William McKinney, representing Cooper and the ACP, and Dominion Energy Vice President Leslie Hartz, representing ACP, signed a final version of the Mitigation Project Memorandum of Understanding. It called for ACP to provide $57.8 million — not to the state — but to be placed in an account controlled by Cooper and for him to spend at his discretion on damage mitigation, economic development, and renewable energy projects in the eight counties affected by the pipeline.

The next day, Cooper’s Department of Environmental Quality announced it was issuing a critical water quality permit to ACP. Soon after, Cooper’s office announced the $57.8 million fund.

Carolina Journal’s reporting raised concerns about the legality of the fund. Legislators said the arrangement was unconstitutional and looked like a “pay to play’ scheme. In February, the General Assembly voted to redirect Cooper’s discretionary fund to the school systems in eight counties in the path of the pipeline.

Legislative leaders still wanted to know the details of the DEQ permitting process and the background behind the $57.8 million discretionary fund, as well as Cooper’s possible intervention in negotiations between Duke and the solar industry on the interpretation of recent legislation aimed at reducing the cost of solar power to ratepayers. They established a subcommittee to study all aspects of the ACP. In December 2018 that subcommittee hired private investigators to examine documents and the people involved. Cooper won’t allow investigators to interview state employees.

CJ has published more than 30 stories related to the ACP.

Many key players in the ACP story are in the attached image. For a larger view, click here. 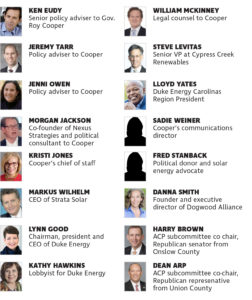 ACP files application to the Federal Energy Regulatory Commission for authorization to build and operate a pipeline.

Cooper sworn in, and Ken Eudy takes job as a senior policy adviser.

Owen asks Tarr for more information on the permitting process. “I’m asking about timeframe overall so we can decide if/when/what Gov will make a statement,” she wrote.

Tarr sends memo to Kristi Jones to give her background information on Strata Solar CEO Markus Wilhelm for Wilhelm’s upcoming call to governor. Wilhelm wrote to Cooper for help in negotiating better terms for solar companies wishing to connect with Duke Energy.

FERC approves Certificate of Public Convenience and Necessity for the ACP.

A National Governors Association staff member responds to a request from Tarr, who asked whether a precedent exists for a company setting aside funds for community benefit before approval of a major deal or project. NGA staffer warns Tarr such an arrangement may be considered an extortion scenario.

Duke Energy lobbyist Kathy Hawkins, representing ACP, submits first version of a Mitigation Memorandum of Understanding (MOU) that establishes a fund payable upon approval of all permits and construction of the pipeline.

McKinney texts Cooper and Eudy: “Am set to sign MOU regarding Pipeline with ACP tomorrow morning at ten.” Cooper: “It’s what we discussed earlier right?” McKinney: “Correct.” Cooper: “Where are the solar boys on their deal?” Eudy texts Steve Levitas (solar executive): “Do y’all have agreement with DE [Duke Energy]?”

Eudy to Steve Levitas: “???” Eudy texts McKinney: “No response from Levitas yet. Not sure we should sign ACP agreement unless solar deal works.” McKinney agrees, but says, “shouldn’t linger.”

Duke Energy Carolinas Region President Lloyd Yates asks Jones: “Here is the issue: Why does it seem that approval of the Atlantic Coast Pipeline is dragging? How can we move it along? We have had a number of discussions with Eudy and slow progress.”

Text message exchange between Eudy and Cooper Communications Director Sadie Weiner: “On the ACP tick tick, is there any time for selected pre-announcement media background briefing?” Weiner reponds: “There is not. I love the idea of it but I’m not sure our press corps understands or appreciates those. But assuming solar comes together we will need to pick a reporter to share that with and bring him or her in to sit down with you to understand wtf it’s all about.”

Political donor and solar energy advocate Fred Stanback writes to Dogwood Alliance Executive Director Danna Smith about a conversation Stanback had with Cooper. “Governor Cooper named several good things he was doing, but said that if the state opposed the pipeline, it would get sued and lose. He said he negotiated several concessions from Duke Energy,” Stanback wrote.

McKinney, representing Cooper, and ACP sign the final version of an agreement — ACP provides $57.8 million for Cooper to spend on damage mitigation, economic development, and renewable energy projects in counties affected by the pipeline.

The subcommittee hires private investigators to review documents and interview state employees involved with the ACP permit process and the $57.8 million.

Cooper’s office and DEQ release to the media and the ACP subcommittee about 40,000 pages of emails and documents associated with the ACP.

Jones writes letter to Brown and Arp informing them outside investigators won’t be allowed to interview employees involved in the ACP permitting process or those who negotiated the $57.8 million fund.

Brown and Arp respond to Jones by writing Cooper directly. They accuse him of obstructing the investigation and say the investigators will continue to pursue interviews with state employees.