TransPark Still Broke With No Way to Retire Debt 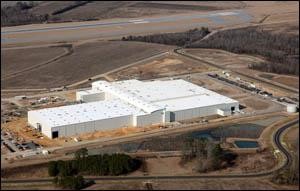 The Global TransPark Authority, a two-decade-old industrial park near Kinston created by the General Assembly to handle air cargo, still cannot repay more than $20 million it has borrowed from the state treasurer — and has no idea how the debt will be retired. Unpaid principal and accrued interest — owed to the state’s Escheat Fund — are approaching $38 million.

Even though the park has landed an “anchor tenant” in Spirit AeroSystems, a Wichita, Kan.-based company that is set to start manufacturing large aircraft components later this year, government incentives to Spirit mean taxpayers will subsidize employment at GTP to the tune of $200,000 per job. GTP officials say they may ask this year’s short session of the legislature for help with the debt.

GTP Executive Director Darlene Waddell acknowledged that the debt to the state treasurer’s office was a serious concern. She told Carolina Journal her board members plan to discuss it with members of the General Assembly later this year.

“Nothing would thrill me more than to not have that debt on our books,” she said. Since the park generates nearly all its revenues with rent from commercial tenants, Waddell acknowledged the park had no funding source to repay the debt.

Rep. Van Braxton, a Kinston Democrat, is a strong supporter of the GTP, but agreed the debt is a problem. “I would like to see the TransPark pay that back but clearly right now they can’t do that,” he said.

State Treasurer Janet Cowell didn’t elaborate when asked about the debt. “We are encouraged by recent updates from the Global TransPark Authority and continue to monitor activities,” a spokeswoman said.

Senate Minority Leader Phil Berger, R-Rockingham, cast doubt on Waddell’s plan to seek help from the General Assembly. “It was inappropriate for the original borrowing to be allowed. State debt in general has been a problem,” he said. “There should be a business plan other than a bailout from the taxpayers.”

Spirit, established in 2005 as a spin-off of Boeing Commercial Airplanes, is the world’s largest independent supplier of commercial airplane assemblies and components. Spirit sought business from Boeing and its main competitor, Europe-based Airbus.

In 2006, state Commerce Secretary Jim Fain led a recruitment team to court Spirit. Gov. Mike Easley and other state officials announced the Spirit project in May 2008. Spirit chose the GTP after winning a contract with Airbus to design and produce the composite fuselage structure for a new aircraft model, designated the A350XWB aircraft.

In April, Spirit will take possession of the nearly completed 500,000-square foot manufacturing building on a 304-acre site adjacent to the 11,500-foot GTP runway.

The company plans to hire 250 employees the first year and expects to exceed 1,000 after six years. Average annual pay is expected to be $48,000, or about $21,000 more than the average salary in Lenoir County.

GTP’s Waddell refers to Spirit as the park’s anchor tenant, as if it were similar to a Sears or Belk’s department store at a shopping mall. She believes Spirit will attract other companies, allowing the GTP to generate enough revenue to pay back the loan.

The anchor tenant came at a high cost to the public. While Spirit officials have stated the company plans to invest approximately $500 million in the facility, state officials committed subsidies in excess of $200 million to attract the company. If Spirit hires 1,000 workers, the cost to taxpayers may exceed $200,000 per job.

A major component of North Carolina’s incentive package is an agreement for GTP to pay $100 million toward Spirit’s building. GTP will own the structure and lease it to Spirit for $100 per year. Since rent is the park’s primary source of revenue, Spirit will not generate enough money to help GTP repay its debt. The TransPark obtained a $100 million grant from the Golden LEAF Foundation to secure the Spirit project.

The GTP loan authorized by the General Assembly was from a fund managed by the state treasurer known as the Escheat Fund.

An escheat is the succession of unclaimed property to the state, often the result of someone dying without a will or any known heirs. It also includes any property or funds unclaimed or abandoned, including utility deposits or bank deposits. The treasurer’s office searches actively for the rightful owners of unclaimed property. The current total value of the Escheat Fund is $459 million.

The interest on the fund goes to the State Educational Assistance Authority to pay for grants, loans, and scholarships for North Carolina students attending public universities and community colleges. In 2009, the treasurer’s office reports that 88,000 students were receiving assistance from the program.

The General Assembly passed legislation last year extending the due date to Oct. 1, 2011. The bill also required the GTP Authority to report “its strategic, business and financial plans. The report shall include the Authority’s proposed schedule to achieve financial self-sufficiency and proposed schedule to repay the Escheat Fund” to the House and Senate appropriations subcommittees on transportation on or before May 15 of this year.

The $100 million grant from Golden LEAF (Long Term Economic Advancement Foundation) to the GTP Authority is the largest in the foundation’s history.

Golden LEAF receives one half of the funds from North Carolina’s share of the multistate settlement with the nation’s four largest cigarette makers. The fund is expected to generate roughly $5 billion over time. The governor, president Pro Tem of the Senate, and speaker of the House each appoint five members to the 15-member Board of Directors. The foundation headquarters is in Rocky Mount.

“A nonprofit organization devoted to the economic well being of North Carolinians, Golden LEAF endeavors to strength the state’s economy through diverse grantsmaking,” according to the organization’s literature.

To date, including the grant to GTP, Golden LEAF has made more than 900 grants totaling over $400 million.

In September 2008, the board appointed Dan Gerlach, a former budget advisor to Easley, as the foundation’s president. Prior to joining the Golden LEAF staff, as a top aide to Easley, Gerlach was a member of the state’s recruitment team that worked to land the Spirit project.

In an interview, Gerlach also said he didn’t know how GTP plans to repay the $37 million owed to the state treasurer’s office.

The General Assembly created the GTP Authority in 1991 as a state agency located within the N.C. Department of Transportation. A 1992 study commissioned by the state projected that the park could be responsible for more than 100,000 new jobs by 2010. More than $140 million in public funds have been spent on the 2,400-acre GTP since the project was launched.

State Transportation Secretary Gene Conti, appointed chairman of the GTP board by Perdue, was excited about the Spirit project. “The coming of Spirit to GTP is likely among the most important events in the business history of our state,” he wrote in a commentary for The Charlotte Observer. “Now, the GTP can leave the long struggle for respectability behind,” he said.

But the respectability Conti is counting on will not satisfy GTP’s debts.

GTP’s audited financial statement for the fiscal year ending June 30, 2008, provides some insight about the park’s financial condition. The GTP had total operating revenues of $1.2 million and expenses of $4.5 million, for a net operating loss of $3.3 million.

To continue operations, GTP relies on the General Assembly for a $1.6 million annual grant and the postponement of payments to the treasurer’s office.

In addition to the Escheat Fund loan, GTP also has outstanding loans of approximately $3 million to the U.S. Department of Agriculture and almost $2 million to private lenders. Waddell told CJ dedicated lease revenues cover those loans.