Treasurer frustrated by lack of transparency from UNC Health Care

State Treasurer Dale Folwell says the State Health Plan is paying UNC Health Care too much for member services and treatments. He just doesn’t know how much the potential waste, fraud, and abuse is, and the health care system refuses to give him information needed to correct the overpayments.

“We asked for a copy of the contract [with UNC Health Care], and that’s what we were provided,” he told Carolina Journal, referring to a printout with what he called some 200 pages of information blacked out, and other sections liberally redacted.

After the meeting, Folwell poked the providers in a press release with portions redacted (excerpt below). 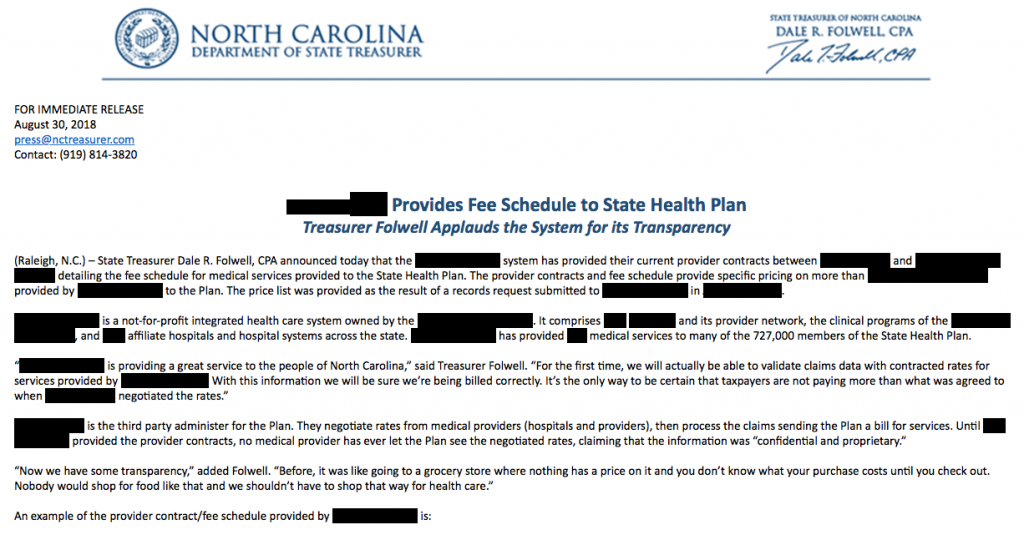 Identifying excessive charges is tough. The State Health Plan pays $270 million yearly to UNC Health Care, which provides a significant amount of medical care to many of the State Health Plan’s 727,000 members. The plan is only 3 percent funded, one of the nation’s five worst state plans.

Folwell said he’s going to ask State Auditor Beth Wood to audit the State Health Plan, in part to review contracts and look for overbilling. The last audit was done seven years ago.

Even so, the statement said, “All health care agreements between hospitals, doctors and insurance companies are proprietary business agreements, and therefore considered confidential. In addition, independent audit firms routinely examine insurance contracts to ensure the correct contract rates are being applied.”

We also provide the State Health Plan with all of their claims data. The data is fully transparent and includes the billed amount, allowed amount, and paid amount for each claim. However, certain contract details are critical competitive trade secrets for all payers and health systems. Sharing trade secret information is not in the interest of Blue Cross NC or the State Health Plan.

Folwell isn’t satisfied. “I don’t think people hired me to be the state treasurer to send money out of here when I don’t know what I’m supposed to pay,” he said.

He said taxpayers and State Health Plan members should be alarmed that the insurance administrator and a major health care provider refuse to release price lists.

“There’s billions of dollars of unnecessary services, billions of excessive administrative costs, billions of inefficient delivery, billions of prices that are too high, and billions of fraud. All this exists in this State Health Plan,” Folwell said. But he can’t determine how much overspending takes place until he knows what the state is supposed to pay for services.

“People don’t consume health care in this state. It’s consuming them. And it’s consuming businesses of all sizes, and the state is a big business,” Folwell said. “We are going to figure out what we’re supposed to pay.”

The lack of provider price lists has irritated Folwell, who’s pushed for more transparency and lower medical costs. He convened a roundtable of the state’s key players in mid-July seeking ways to bring down health-care costs .

Even if the State Health Plan determines it overpaid UNC Health Care, by law, the state can’t demand refunds for charges more than two years old, he said. Many bad claims would be untouchable.

Conservatives have better solutions than government for racial injustice