Low voter turnout is one of several challenges resulting from a court order setting a deadline to redraw legislative districts and establish special legislative elections next year.

Judge James Wynn Jr., who sits on the 4th U.S. Circuit Court of Appeals, wrote the opinion throwing out the current legislative districts and the order setting a March 15, 2017, deadline for the General Assembly to draw new legislative districts. The order requires the state to hold special elections for members of the General Assembly in affected districts. The panel’s opinion has been appealed to the U.S. Supreme Court, which will hear the appeal sometime in its current session.

“It’s pretty easy to sum up: Turnout will be poor,” said Michael Crowell, a retired election attorney who also taught at the UNC School of Government.

State Board of Elections Executive Director Kim Strach, in a document prepared for the court, noted that turnout was 8 percent in a stand-alone primary in September 1998 primary for congressional races, compared with 18 percent for a regularly scheduled primary held in May that year. The June primary held this year for congressional races and an N.C. Supreme Court seat drew a turnout of less than 8 percent, Strach wrote. (See related story here.)

Crowell said turnout is highest during presidential elections, as evidenced by numbers approaching 70 percent this year. But there’s not nearly as much interest in elections during odd-numbered years, when, typically, municipal elections are held.

“I think you can expect that from legislative seats,” Crowell said.

And many voters, simply put, are weary of the process.

“I think one reaction can be: ‘I’m just not going to go vote; I’m just tired of it all,’” Crowell said. “I think that’s a real problem.”

“That’s called judicial voter suppression,” Rucho said. “What you’re talking about is the disenfranchisement of 10.3 million people in North Carolina because of Judge Wynn’s rogue decision.” 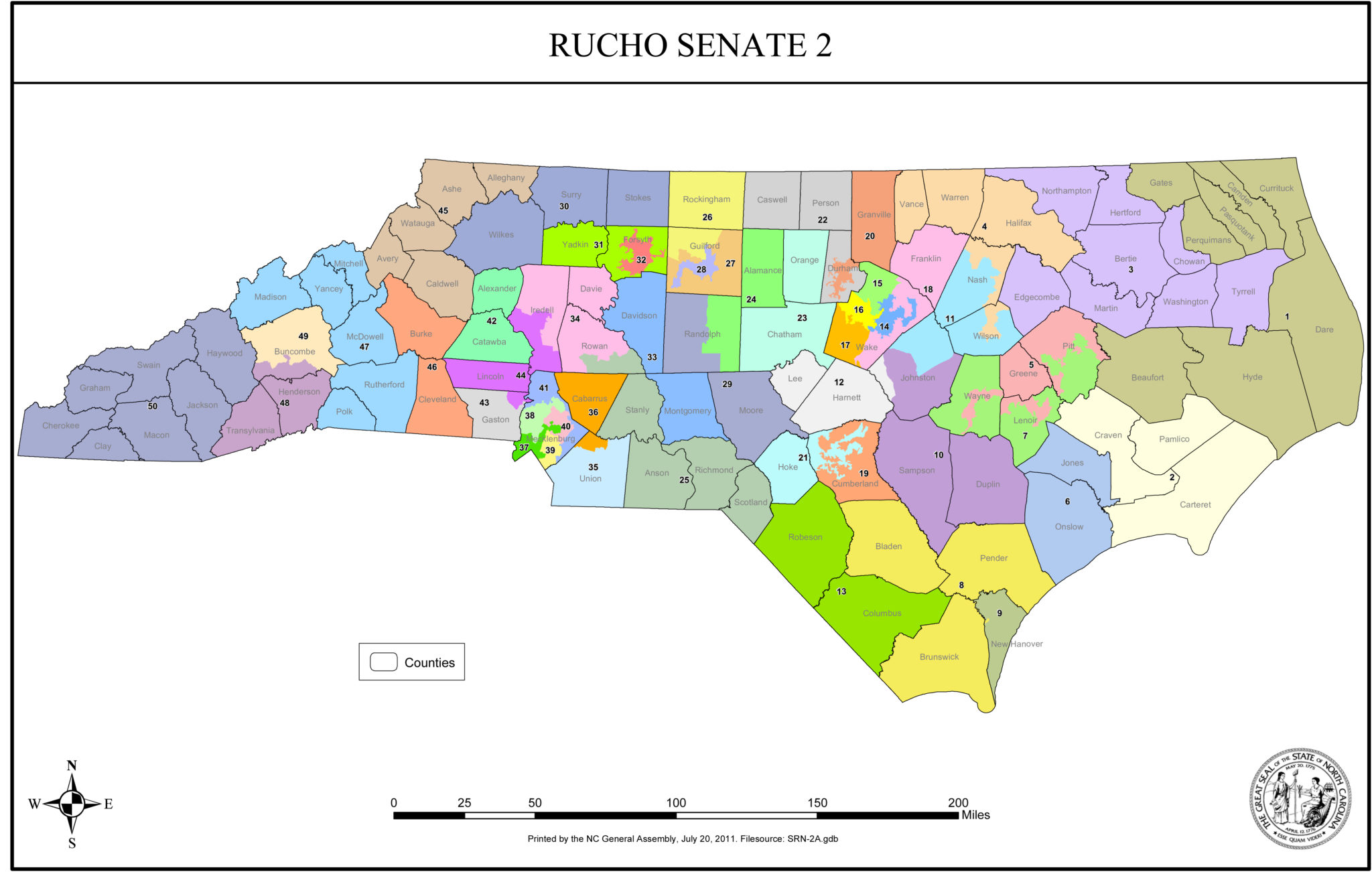 Unless the U.S. Supreme Court restores the legislative maps drawn in 2011 (Senate map shown above), new legislative elections will have to be held in several of these districts next year. (N.C. General Assembly map)

The order comes after the three-judge panel ruled in August that nine state Senate districts and 19 state House districts were “racial gerrymanders” and violate the Equal Protection Clause of the 14th Amendment to the Constitution.

The court ruled the state no longer could use the maps after November 2016. But because the date of the order fell so close to the November elections, the court begrudgingly allowed the 2016 legislative elections to move forward under the challenged maps drawn in 2011.

The latest order, which came Nov. 29, voids a state constitutional requirement that members live in their district for one year prior to their election. The order allows people to run for office as long as they live in the district by the closing day of the filing period for the 2017 special election.

Michael Curtis, a professor of constitutional and public law at the Wake Forest University School of Law and a nationally respected expert on constitutional law, said throwing out the districts was justified. Curtis says racial gerrymanders “under the purported guise of the Voting Rights Act undermined black political power and multiracial coalitions in favor of whiter and blacker districts.”

The U.S. Supreme Court will hear arguments today in a challenge to the racial composition of the state’s 13 congressional districts.

“When the legislature redistricts, the danger is that it will seek to replace its quota-driven-racial packing gerrymander that paid political dividends with a purer political gerrymander,” Curtis said.

Supreme Court justices, Curtis said, consider gerrymandering anti-democratic, though they often have not given legislators much direction in how to avoid drawing districts that are too partisan.

There could be a domino effect. “It’s pretty hard to redraw that many districts without affecting almost all the others,” Crowell said.

Rucho predicted “chaos” and “confusion” will result as voters ask, “Is my county going to have an election or not?”

Rucho said legislative leaders plan to appeal the order to the U.S. Supreme Court and ask the high court for a stay — or delay — in implementing the order until an appeal can be heard. “Hopefully, the Supreme Court will recognize the confusion and the chaos,” he said.