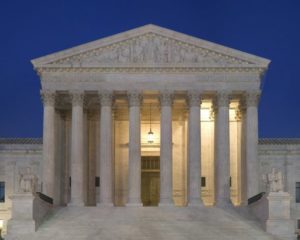 The U.S. Supreme Court said Wednesday, Nov. 24, that it will hear a case early next year involving North Carolina’s voter ID law. At issue is whether state legislative leaders are allowed to intervene in the case to defend the law.

A U.S. District judge blocked the law in 2019. The law, requiring voters to show ID, was passed in December 2018. The N.C. chapter of the NAACP, as well as several local chapters, filed a lawsuit the day after the voter ID requirement became law because, in their opinion, it violates the state’s constitution and the federal Voting Rights Act.

Voters in the November 2018 general election voted in favor of a voter ID amendment to the state’s constitution, but there were no details as to how it would be implemented. The General Assembly passed a law with the details in December. Democratic Gov. Roy Cooper vetoed the bill, but Republicans overrode the veto before their supermajority ended due to the “blue wave” midterm election held the previous month.

On Dec. 31, 2019, U.S. District Judge Loretta Biggs, appointed by former President Barack Obama, issued an injunction against the law, stating the defendants could not implement the new voter ID requirements and must stop any communications to the public that say a photo ID would be required for all 2020 elections. She cited the history of race discrimination and voter suppression in North Carolina as reasons for her decision.

The legislators asked the Supreme Court in August to decide if they were required to show that the state’s interest was not adequately represented to intervene. The justices said they would grant a review of the case, Berger v. North Carolina State Conference of the NAACP, sometime between February and March.

“We look forward to taking this fight to the U.S. Supreme Court,” House Speaker Tim Moore, R-Cleveland, said. “Attorney General Josh Stein has repeatedly put his political position above the will of the voters and cannot be trusted to defend North Carolina’s constitutional voter ID law.”

“The people have spoken,” Moore added. “A resounding majority of North Carolina voters have approved voter ID at the ballot box. We will ensure their voices are heard. We will mount a vigorous defense of the law on behalf of the citizens of North Carolina.”

In a separate case in state court, a split 2-1 Superior Court panel had rejected North Carolina’s voter ID law in September, five months after holding a trial in the case. The court majority labeled the 2018 law racially discriminatory and unconstitutional.

One of the state Senate’s election law leaders responded to that state court ruling.

The state court ruling now blocks voter ID. Before the U.S. Supreme Court agreed to address North Carolina’s voter ID issue, Biggs was scheduled to hold a trial in the federal case in January. It’s not clear whether that trial will be delayed.

Meanwhile, the N.C. Supreme Court is addressing a related issue. The state’s highest court is considering the fate of the constitutional amendment requiring voter ID. Carolina Journal has been tracking developments in that case at ExtremeInjustice.com.