Members could receive instruction from UNC School of Government 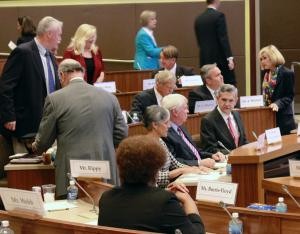 CHAPEL HILL — The UNC Board of Governors rightly recognizes gaps in its knowledge of the law — and admits its need for coaching on the subject, said Jonathan Jones, director of the North Carolina Open Government Coalition and Sunshine Center at Elon University.

Mistakes in recent proceedings — including the closed-session votes to interview former U.S. Education Secretary Margaret Spellings for the open UNC system president position and to give 12 campus chancellors pay hikes — have pushed the board to schedule discussions about transparency and the state’s open meetings law on its Dec. 10 meeting agenda, board Vice Chairman Lou Bissette told a Nov. 18 hearing of the Joint Legislative Commission on Governmental Operations.

The board also will hold an educational seminar on transparency issues — potentially led by the UNC School of Government — sometime in the near future, according to Bissette.

“I believe that the current Board of Governors and our new president recognize the importance of focusing on policy and strategic issues facing the university and public higher education in general,” said Bissette, who recently stepped up as interim board chairman following the controversial resignation of John Fennebresque. “In that light, we are interested in looking carefully at our effectiveness as a working board, which includes encouraging more open discussion and voting wherever possible.”

Lack of experience in how to deal with public information played a large part in recent problems the board has encountered, but secrecy within the UNC system isn’t a new issue, said Jones.

“There’s a long history of the university being one of the least transparent public bodies in our state,” Jones said. “But this is [different] for the Board of Governors to be debating [transparency] in the way that we’ve seen over the last year.”

Months of questions about too much mystery within board operations came to a head recently following an Oct. 30 closed-session vote on the pay raise for chancellors.

Members of the board called the discussion a sensitive personnel issue, but that claim was challenged by Senate leader Phil Berger, R-Rockingham, and House Speaker Tim Moore, R-Cleveland, who issued a legal request to review minutes, agendas, and audio recordings from the Oct. 30 meeting. Berger and Moore also called Bissette before the Governmental Operations Commission to provide further explanation of the board’s actions.

During his testimony, Bissette concluded that the vote to raise chancellor salaries should have occurred in open session. But he defended the board’s delayed release of detailed information about raises, saying the reason for doing so was to notify affected chancellors of their new salaries before those figures were made public.

Jones said the law does not protect such information from immediate release.

“My position is that the minute they voted to raise public salaries, [those salaries] became public record,” Jones said. “And the argument that ‘the new salaries aren’t public record until we’ve notified [the recipients], or until they have been implemented into the system or into our [human resources] department,’ I think is a pretty tenuous argument, and pretty disingenuous. … It’s the public’s business. It ought to be done in public.”

The board has committed a few other offenses showing its interpretation of transparency laws is suspect, Jones said.

One example involves a February meeting during which loud protests from onlookers led the board to move its meeting to a smaller room, keeping out the public and broadcasting the proceedings via video instead.

While Jones said he understands the board’s reasoning in the case, he notes that the action itself may not have complied with the law.

Another example involves an “emergency” meeting on Oct. 16, where the board met in closed session to interview Spellings, who later was elected president of the system.

That meeting, reportedly held to keep Spellings’ name from the public, did not fall under the definition of “emergency” as outlined by the law, which requires “generally unexpected circumstances that need attention,” according to Jones.

Because of the meeting’s technical emergency status, 48 hours notice was not given to the public, as would have been required if the session accurately had been called a “special” meeting. He also noted that the meeting was held at a location that closed its doors to the public before the board had adjourned — another compliance failure.

Ultimately, the problem comes back to the board’s lack of clarity regarding what is — or is not — legal under open meetings and public records laws, said Jones, who applauds Bissette’s proposal to seek legal education for all board members.

“Getting some outside expertise to come in and give them assistance I think is precisely the right answer,” Jones said. “I hope that this experience of having some public discomfort with the level of transparency on the Board of Governors will help reinforce the idea that transparency is an important part of establishing trust with your constituents. And in this case, the constituents are the people of North Carolina who see that this university system remains our crown jewel.”