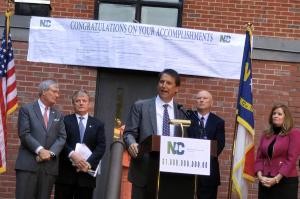 Gov. Pat McCrory on Thursday announced that the state’s unemployment reserve fund has ballooned to $1 billion, meaning that businesses across North Carolina will see the surcharges on their state unemployment taxes drop in January, resulting in more than a half-billion dollars in tax relief.

McCrory made the announcement to a group of Division of Employment Security employees on the lawn behind the division’s office, noting this is the first time since 2001 the surplus has topped $1 billion.

The state tries to build up reserves in the unemployment insurance reserve fund during better economic times to act as a buffer when recessions hit.

“I hope another downturn doesn’t come, but we should always be prepared for it,” McCrory said.

In January 2013, when McCrory became governor, North Carolina was $2.5 billion in debt to the federal government for unemployment insurance payments to workers who lost their jobs during the Great Recession.

Dale Folwell, director of the Division of Employment Security, said that the $1 billion reserve triggers the end of a surcharge that North Carolina employers would have paid beginning in January 2016 to the unemployment trust fund. And since the state has retired the debt owed to the federal government, a federal surcharge will also come off, retroactive to January of this year.

In 2013, the General Assembly approved and McCrory signed a bill codifying the surcharges and making sweeping changes in the state’s unemployment insurance benefit program.

McCrory also credited employees in his division for increasing efficiency in the system. He said the division has improved customer service, reducing the time it takes for appeals to be resolved. He also lauded state employees for combating fraud in the system and tracking down employers who weren’t paying their “fair share” of unemployment taxes.

“Our unemployment insurance system safety net for our workers was not in good shape, and it wasn’t sustainable for future generations of workers in North Carolina,” McCrory said. “The penalties being levied by the federal government were burdening employers, particularly small business people.”

“And there was absolutely no plan whatsoever to pay back this debt when I came into office, and no plan to reform the dysfunctional unemployment insurance system,” McCrory continued.

McCrory said that he and the General Assembly made the “hard decisions” to reform the unemployment system. He said the changes in benefits aligned North Carolina with neighboring states and it expected employers to repay the debt as quickly as possible.

“We caught a lot of heat on this,” McCrory said. “People were very, very critical of this move without understanding that we needed a long-term solution to protect the workers of North Carolina.”