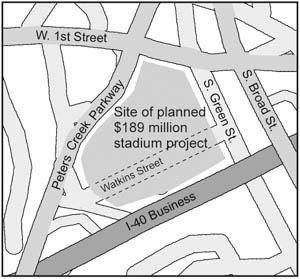 Winston-Salem is getting into the baseball business. Whether Forsyth County joins the city remains to be seen.

At its meeting Jan. 16, the Winston-Salem City Council unanimously signed off on $29 million in incentives to help build a baseball stadium downtown on a site bordered by Business Interstate 40, Peters Creek Parkway, and Broad Street. The stadium would be only the first phase of a $189 million project that would also include office, retail, and residential development.

Councilman Robert Clark insisted that the city had performed adequate due diligence to ensure the project would eventually stand on its own. “The reason it’s taken three years to get here is we’ve insisted on that,” Clark said.

The incentives package involves $21 million over 20 years on a loan for stadium costs plus $8 million in grants based on up to 100 percent of property taxes paid. Another $16 million to buy additional parking spaces is also a possibility. The city’s construction costs would be reimbursed through increases in tax value on the stadium, the sale of Ernie Shore Field, where the Winston-Salem Warthogs now play, and a surcharge on tickets.

The ticket surcharges were a sticking point when the city was considering the package. While the surcharges are expected to help generate considerable revenue for the city, it was based on an annual attendance of 350,000, more than twice the number of people that attended Warthogs games in 2006, according to the Winston-Salem Journal. With that in mind, Billy Prim, Warthogs owner and the developer of the project, will be required to provide a letter of credit on the surcharge revenue.

The city will also provide $1,000 to assist families in the neighborhood who will be displaced by the project, with Prim kicking in an additional $1,000.

Other revenue sources include $2 million in a federal transportation grant and $1 million from The Millennium Fund. Prim is investing $8 million in the project and offering up the company that owns the team, Sports Menagerie, as collateral if the project doesn’t work. The Journal cited city documents when it reported Sports Menagerie’s worth at $14 million. So far, Prim has refused to reveal his company’s worth.

Another major issue is the proposed city ownership of the stadium in 25 years under the terms of the agreement. At a recent City Council meeting, Deputy City Manager Derwick Paige admitted the city wasn’t sure what it was getting itself into.

“We don’t know what we will be purchasing at that point,” Paige said.

Forsyth County officials also are considering an incentives package, but they are less enthusiastic than the city about providing public money for the deal. Commissioners have made a counter offer that was less than the original $14 million proposal.

But commissioners have already said the county has little interest in co-owning the stadium with the city.

“I question the asset value of a 20-year-old stadium that may well need major renovation after 20 years of public use,” Commissioner Bill Whiteheart wrote in an e-mail message.

“It would be an old stadium by then. It’s going to need repair and renovation. Then there’s the operational cost,” Commission Chairwoman Gloria Whisenhunt said in a phone interview.

Public venues don’t appear to age well, given the fate some relatively young buildings have met in recent years. At the major league level, Three Rivers Stadium in Pittsburgh and Riverfront Stadium in Cincinnati, both completed in 1970, have already met the wrecking ball. The Charlotte Coliseum, which opened in 1988, is now considered a relic and awaits demolition.

Those lucky enough to still be standing are losing money, such as the city-owned Greensboro Coliseum and Lawrence Joel Coliseum in Winston-Salem.

Civic centers don’t fare much better. The old Raleigh Civic Center, built in the 1970s, has been torn down, while Asheville recently pulled its 32-year-old civic center off a list of properties the city wants to sell. But city officials still don’t know what to do with it.

The civic center needs a new roof and other repairs, and many question whether it has the capacity to handle shows that would attract a regionwide audience. The Asheville City Council appropriated money for the new roof in October, but the building’s fate is still up in the air.

It’s important to remember that the stadium is only the first phase of the entire project. Property taxes from the second phase will presumably help reimburse the city.

In December, Steve and Jim Jones, developers of an ambitious mixed-use project two blocks from First Horizon, announced their plans were stalled for the time being. That announcement might have cast doubt as to whether the Greensboro Grasshoppers will purchase the stadium from the Bryan Foundation, which financed the stadium’s $23.5 million construction costs. Team officials said in mid-January they would consider exercising that option if downtown development around the stadium proceeds as planned.

When the Jones brothers announced their project, it seemed too good to be true. That’s the way many Winston-Salem citizens feel about the project they’re being asked to support.

One citizen said as much while speaking out against the project during the public hearing. “If something sounds too good to be true, it probably is,” he said.

Sam A. Hieb is a contributing editor of Carolina Journal.